Home News Banksy: one of the most famous street artists of all time 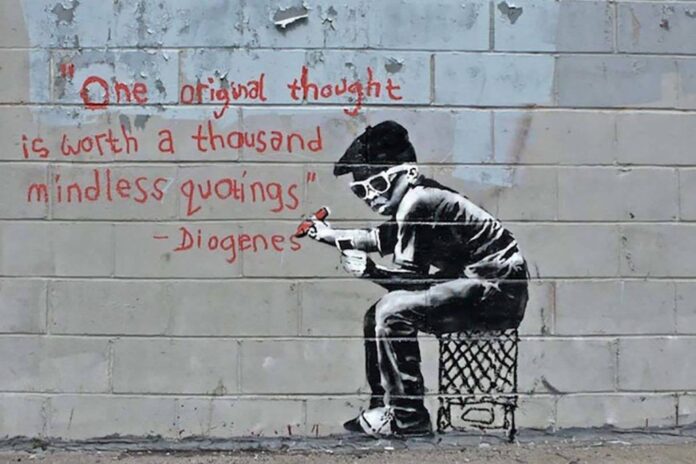 Banksy is a true genius of the street art movement. The art community and its many fans agree with this fact. His popularity is only enhanced by the mystery surrounding his work. No one knows who Banksy is!

In this article we will try to trace his path from a criminal spray artist to one of the most famous street artists of all time, who is known as an activist, director, graffiti artist, and provocateur.

British street artist Banksy became known for his stencils in the early 2000s. Although at the age of 18 he started drawing graffiti for free and almost got caught.

Banksy really became a street artist when he started creating graffiti with the DryBreadZ Crew, a band from his hometown of Bristol. Banksy stated that his work was strongly inspired by the famous French street artist Xavier Prout, aka Black le Rat, who is known for painting rats on buildings using stencils.

Very little information is known about the artist hiding behind the pseudonym Banksy.

Banksy never sells his work through private art galleries, and his subversive exploits go much further.

Banksy’s art will forever remain known for her bold approach and ability to combine passion for street fighting and pacifist fervor. Banksy’s epic story is still in the making. The upcoming locations of Banksy`s street art remain undisclosed. However, Banksy recently launched an online store. He sells his works in limited editions only to fans who write to him, answering the question: “Is art important?”

Christie’s Generated $8.4 Billion in Global Art Sales for 2022, Marking Its Best Year Yet