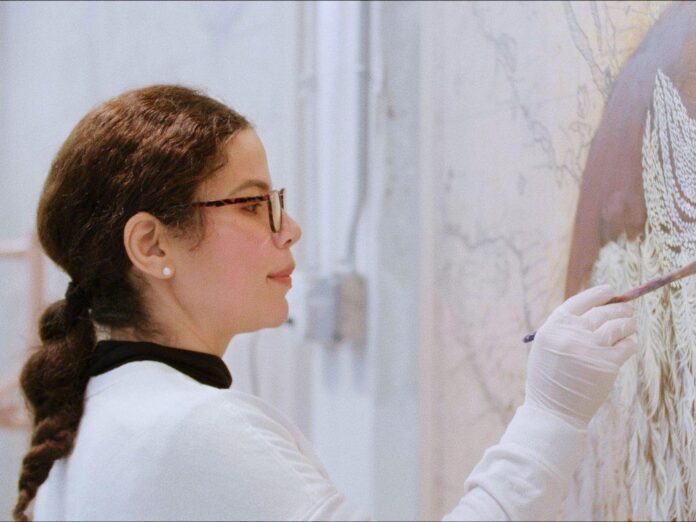 An immersive sculptural installation at the Momentary in Arkansas will offer visitors an unusual opportunity: to travel through time and space. The expansive work by Firelei Báez reimagines the ruins of Sans-Souci Palace in Haiti as though they were emerging out of the Atlantic Ocean, with the vastness of the sky and seas evoked by hanging blue tarps and a mural. The work is not only visually stunning, but explores the history of cultural exchanges between Europe, Africa, and the Americas.

In an April 2021 conversation with Art21, Báez likewise addressed the colonial history of the Caribbean, but this time on the more manageable scale of the canvas, opening up about her experiences growing up in the Dominican Republic and her extensive interest in the region’s past and rich folklore.

“I remember always making,” she said of her childhood. “When I was six, other kids would have me draw out these very fancy ‘mariquitas’ [paper dolls] for them. I would have these elaborate ball gowns. They would always have very intricate hair. I was always dealing with the body.”

“One of the first reasons that I wanted to work on these paintings,” she said, referring to a series of botanical-based canvases she was filmed working on, “was looking at some of the first scientific illustrations of flora and fauna from the New World.” In particular, she referenced the scientific methods of Swedish botanist Carl Linnaeus: “So much of his work was sheer nonsense. It equated the New World Black and brown body with bestiality.”

Instead, Báez found inspiration in the misunderstood female creature Ciguapa, found in Dominican mythology. “The Ciguapa is this trickster figure. She is a seductress. Someone will be lured by her and then be completely lost and never seen again,” she said. “In reading my paintings of Ciguapas, I’m asking the viewer to come to terms with their own feelings around a woman’s body.”

“The normative tone of the story is these are wanton female creatures. They’re hypersexual and they derail culture. The understory is they are highly independent, they’re self-possessed, and they feel deeply,” she said of her preferred interpretation. “So who wouldn’t want to be that?”

In reframing such narratives, Báez continues to uncover new ways to “shift ideas of power.” “In that process, you shift the world around you,” she added. “That’s where beauty can be subversive.”

While the Mauritshuis Sends ‘Girl With a Pearl Earring’ on the Road, It’s Inviting the Public to Create Their Own Renditions to Hang in...