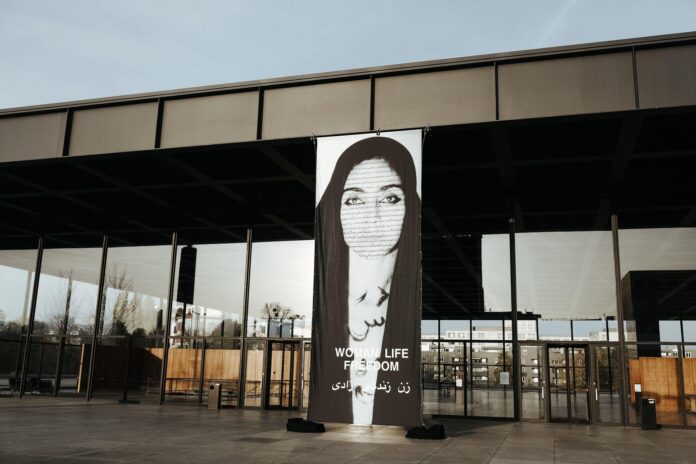 A major German museum, the Neue Nationalgalerie in Berlin, unveiled a work by the Iran-born, New York-based artist Shirin Neshat on its façade following the death of Mahsa Amini. The intervention—which took place on Sunday—is the most high-profile institutional show of support for protestors in Iran after museums in the UK and US were criticised for failing to address the worsening human rights situation in the country.

Amini, also known as Jina, died in an Iranian hospital in September after being detained by the regime’s morality police for allegedly not complying with the country’s hijab regulations. Her death sparked ongoing mass protests in Tehran and cities across Iran. According to France24, Iran’s state-run IRNA news agency quoted judicial officials saying that 1,000 people who had a central role in the protests would be brought to trial in Tehran alone over their “subversive actions”.

Neshat’s banner, which hung in front of the building’s main entrance, shows the 1993 self-portrait Unveiling from the series Women of Allah (1993-1997); it also features excerpts of text by the late Iranian poet Forugh Farrokhzad and the slogan “Woman, Life, Freedom” in Farsi and English.

“In the midst of overlapping crises, the question arises: what is a museum today?” says the Neue Nationalgalerie director Klaus Biesenbach in a statement, prompting a debate about how museums should respond to geopolitical crises. Other galleries have also attempted to respond; Tate, for instance, posted a film on Instagram about Neshat’s life and work.

Biesenbach adds: “In recent months, the Neue Nationalgalerie has faced the challenges of the times and was a place of mutual help around the beginning of the Ukraine war. Now the intervention with the Iranian artist Shirin Neshat draws attention to the protests [critical of the regime] in Iran and demands sympathy for the people who protest with tremendous civil courage and risk their lives for democracy and human rights.”

But not everyone on social media agrees with the intervention. A commenter on Instagram writes: “Real artists are sharing their art anonymously with each other to let the movement progress.” An anonymous collective unfurled a series of banners covered with the face of Amini at the Guggenheim Museum in New York on 22 October.

“The people of Iran are subjected to horrific violence and brutality on a daily basis. With restricted internet access and minimal or false coverage by western media, it is time to see them and hear them by shedding light on their fearless fight against a totalitarian system,” said the collective in a statement.

Comic Book Dealers Are Making Six-Figure Sales at New York’s Comic Con, Thanks to the Boom in Film and TV Adaptations

Here’s What We Know About the Upcoming Salvador Dalí Biopic, Starring Ben Kingsley as the Legendary Surrealist