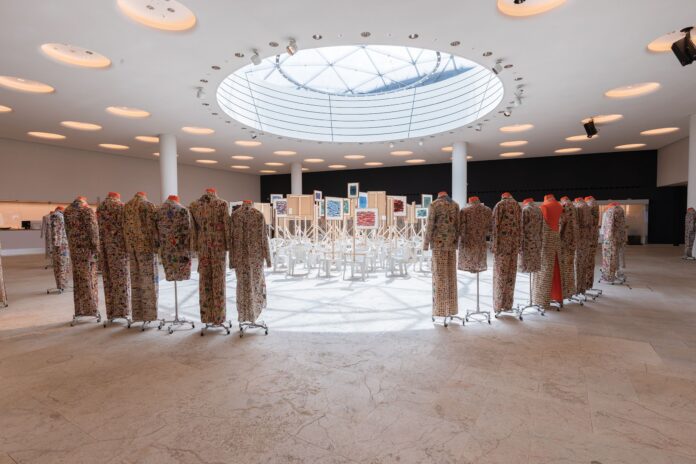 The Parcours programme at Art Basel sets the art free from the conference hall, instead popping up across the city’s Old Town. This year you will find 21 works in locations including museums, gardens, corporate headquarters, a futuristic car park and a centuries-old blacksmith.

“Every year I still have to tell people that Parcours is not just the outdoor sculpture exhibition: it’s much more than this,” says its curator Samuel Leuenberger, who is also the founder of the not-for-profit exhibition space SALTS on the outskirts of Basel. “Artists come to Basel to walk through the city with me and pick a location together that excites them.” As the only part of the fair that is open for free to the general public, Parcours has a different feel to the other sections. It culminates on Saturday night (18 June), when all the projects are open late and there will be music and performances.

We asked Leuenberger to pick out some of this year’s highlights.

“I’ve wanted to work with Oscar Murillo on Parcours for years but it never worked out before. He is presenting a fusion of two projects into one very large physical installation in the lobby of the UBS headquarters. One of the projects consists of the cheap white plastic garden chairs that everyone has. Every chair has a sort of protest sign stuck in it, but instead of a protest sign there is a little framed drawing. It’s surrounded by uniforms hanging on the wall with a design [based on children’s drawings]. It all comes together in this very beautiful installation where everything is about the human presence, but no one’s there.”

“This is very exciting—we were able to use one of the oldest blacksmiths in the city, with this beautiful cavern-vaulted storage room where the artist will display different objects every day. McClodden was very interested in this location because she has been initiated in the Afro-Cuban religion of Santería as a priestess of Ogun, who is known as the god of iron. For Parcours she has recrafted an achaba de Ogun, which is a sort of spiritual necklace made out of 21 metal objects and tools.”

“This is Simon Starling’s second time in Parcours. He’s showing a really beautiful work in a location that has only just been finished. It’s an underground, very sci-fi car park. It’s on four floors and it’s gigantic and completely untouched—people don’t know about it yet. The core work is a sliced-apart 1968 Fiat and painting by Tiepolo. The painting was once eight metres long but was cut into two parts, one of which went to the owner of Fiat in Turin. In his typical way, Starling has the car and painting facing each other in a sort of stand off.”

“This is a film I wanted to show for a long time—it’s almost a full feature film. There was a large seed vault in Syria which had to be moved during the war. Jumana Manna documents the saving of these seeds and makes a portrait of the people working on it. But underlying it is a critique of migration, displacement and war. Manna has a very beautiful way of portraying difficult situations.”

“Bojan Šarčević is an artist based between Paris and Basel. He is doing an intervention in the antiquities museum, in the main exhibition space where the classical Greek figures are displayed. He is showing an adaptation of an earlier work: three chest freezers left in the open air. By adding moisture [to them] it creates a dramatic landscape inside. Each freezer also has its own integrated sound system, which plays a soundtrack from the 1990s, when the artist grew up.”

“Jimmie Durham unfortunately died just last year. But we were able through his estate to get a beautiful work that we’re showing at the entrance of the history museum. When you come in, you find a sculpture that you can walk through. It’s an imitation of a security gate at an airport, but instead of metal, Durham made it from plywood and it’s taped together. Above it, it says ‘Arts, media and sports’, as if it is the [entrance gate] for the world of culture. It shows how simple a work can be—it doesn’t necessarily have to be a big sculpture or big installation. This looks very frail but on a political level, on a social level, it is so poignant about who’s inside, who’s outside, who has access, who gets to say something.”

• Parcours is open 10am-8pm daily, except Saturday until 11pm and Sunday until 7pm

How to Avoid the Worst Traps of the A.I.-Assisted Artwork Debate