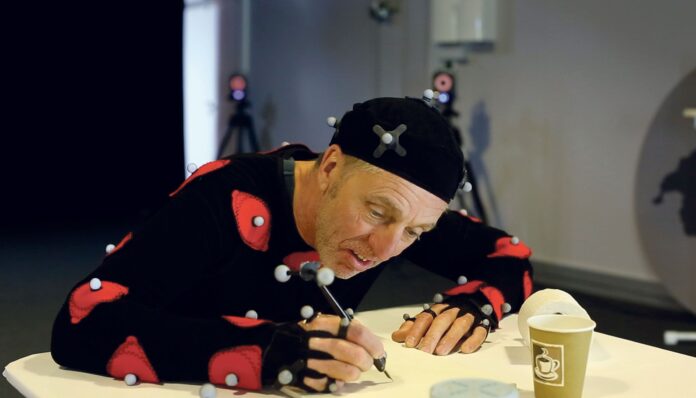 The German painter Albert Oehlen is a very private artist, but also one who has worked in multiple formats, delves freely into tech, and is known for the dizzying variety of his output as much as the dizzying ascent of his prices in the past 15 years. When Oehlen was asked if he would be filmed in the act of painting, he chose instead to be represented by a computer-generated avatar in a virtual reality (VR) recreation of his studio in Pasadena, California. “I thought,” he said, “that it would be nice to have an avatar who could do [the painting] for me and would also spare me having to be photographed.”

In the resulting three-minute VR experience, Basement Drawing—inspired and curated by Hans Ulrich Obrist, the artistic director of London’s Serpentine Galleries, and developed by John MacInnes, of MacInnes Studios, specialists in VR production—the viewer finds themself face to face with a hyper-realistic avatar of Oehlen. Virtual Oehlen—captured by MacInnes and his team using photogrammetry and motion capture, with an array of more than 100 cameras—then advances to a table and sits down to make a pen-and-ink drawing, the action in sync with a pounding, dissonant track composed by the artist.

Basement Drawing, Oehlen’s first venture in VR, is receiving its premiere at Art Basel, presented in partnership with VIVE Arts using the HTC VIVE Focus 3 headset. (VIVE Arts is also showing the film-maker Wu Tsang’s A mighty mass emerges, her own first venture in VR, linked to her Moby Dick series showing at this year’s Whitney and Venice biennials.)

Watching himself in VR, Oehlen says he enjoyed the “artificiality” of the virtual experience. “It was interesting,” he says, “to see how I acted when being filmed or recorded.” Virtual Oehlen is first found standing in a low-ceilinged, heavily detailed basement studio. The digital figure’s gaze is relaxed, quizzical, yet unavoidable. And then the piece starts to play with “artificiality” as the virtual figure nods his head abruptly in time to the music as he draws in the manner of some clockwork automaton, in what feels like a homage to mechanical puppetry. To one side of the space a self-portrait animates to show the artist drinking “cofftea”, a tea-coffee hybrid beverage devised in collaboration with Oehlen “that will never let you sleep again”.

Oehlen is in good hands in his VR project, working with MacInnes, a specialist in the making of hyper-realistic CGI figures. But it was Oehlen, unbidden, who chose a space, a cramped basement, that was ideal for recreating as a room-sized VR environment. “I observed that some—most?—other artists go out into space and explore the emotional effects that one can have in VR,” Oehlen says. “I wanted to do the opposite and lead the viewer through my throat, mind [and] hand into the drawing. The room’s scale was part of the reason I chose the basement as a setting.”

The first eye-to-eye engagement with virtual Oehlen is striking enough to beg the question of whether viewing his own avatar in VR gave Oehlen a new kind of empathy for himself. “Being face-to-face with your own avatar is not nice,” he says. “But I prefer it to being face-to-face myself with the viewers.” “I think Albert was a little shocked at seeing himself as a 3D avatar,” MacInnes says. “In real life we never truly get to experience ourselves from the outside, physically interactive in 3D.”

MacInnes says that he and Oehlen are working together on other uses of his digital avatar. “I do have plans to make a further virtual experience,” Oehlen says, but they are “so extreme that I can’t talk about them”.

‘Everything has a price’: estate agent lists historic foundry that once cast Big Ben’s bells