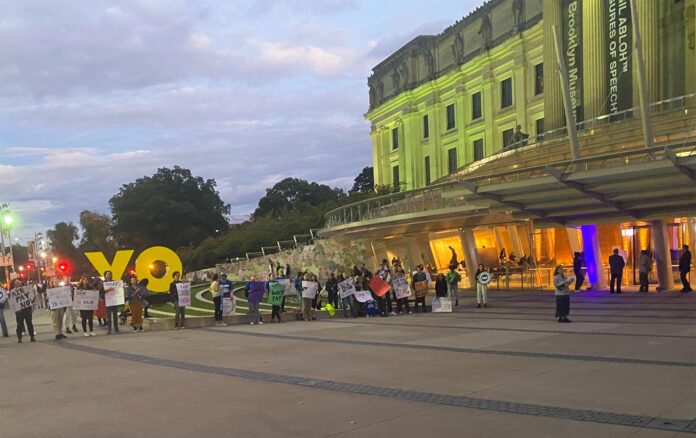 Unionised workers at the Brooklyn Museum held a rally on Wednesday (28 September) evening in front of the museum, coinciding with an open house event that marked the opening of the museum’s renovated Asian and Islamic art galleries. About 100 people took part in the rally, lining the plaza leading into the museum’s main entrance on Eastern Parkway. Over the course of the two-hour event many museumgoers walked around the protesters in an effort to not engage with them. And while there is often security for such events, a New York Police Department vehicle was parked in front of the museum, steps from the demonstrating union members.

“We’re rallying, hoping to bring to the public’s attention and museum visitors obviously and participants in the open house, that the museum is not making a fair offer to the union on behalf of its staff,” says Maida Rosenstein, former president of UAW Local 2110—which represents workers at the Brooklyn Museum and many other major cultural institutions—who now serves as chief responsible for organising and negotiating first contracts. “People are really severely underpaid at the Brooklyn Museum and the museum is just refusing to address that in negotiations. Although, the reason why people organised was to improve their conditions.”

The day before the rally, the museum’s union announced on its Instagram account that it filed an unfair labour practice complaint against the museum with the National Labor Review Board (NLRB). The union is alleging that museum management has engaged in unfair negotiation tactics.

Negotiations for a first contract began in January, with major points of contention revolving around pay, healthcare benefits and job security, among other issues. Many museum workers have not received a pay increase since 2020, according to a union press release, even as inflation and cost-of-living expenses have surged during that time. The museum has reportedly offered a 3% wage raise that would take effect after the workers accepted the museum’s proposal in full. The union is asking for a 7% increase retroactive to 1 July 2022, with 4% increases in 2023 and again in 2024.

“We have been bargaining with the museum since January and feel we have yet to reach an agreement on a fair contract. Particularly we are far apart on the issues of wages and health benefits and feel management is undervaluing our contributions to the museum,” says Elizabeth St. George, a member of the bargaining committee and an assistant curator of decorative arts. “We are taking part in this action tonight out of deep love and commitment to the museum, as well as its mission for social justice. We want to build a culture and community where the brilliant creativity and hard work of the staff is matched with fair labour practices and compensation.”

The Brooklyn Museum’s staff voted to unionise in August of 2021. They are represented by the United Auto Workers (UAW), which represents many cultural institutions and non-profits across the Northeast including the Museum of Fine Arts Boston, New Museum, Jewish Museum, Mass MoCA and others. Amid declining revenue and a dip in visitors due to the Covid-19 pandemic, the museum laid off 24 staff members in 2020. Following the staff layoffs, and amid a set of larger issues affecting the arts industry that sparked a nationwide unionisation movement, Brooklyn Museum workers began to organise.

“Our members who are at the Brooklyn and at other places like the Whitney and the Guggenheim, and I’m sure this is true at the Philadelphia Museum of Art as well, organised in part, not only to better their own conditions but to make museums more sustainable places for people to have long-term careers, and because they care about the institutions and they care about the work that they do,” Rosenstein says. “It’s very frustrating that museums are not recognising that. And it’s often professional standards that people are seeking, to have livable wages, benefits, conditions and a voice in the institution because they’re committed to their professional standards and the work that they do.”

The Brooklyn Museum rally coincides with an ongoing strike by workers at the Philadelphia Museum of Art, where unionised workers have been negotiating with management for their first contract for 23 months.

“The Brooklyn Museum has been negotiating with UAW Local 2110 in good faith since February 2022 and remains committed to partnering with our staff to achieve an agreement that advances our commitments to wage equity,” a museum spokesperson says. “The museum recently approved a financial year 2023 operating budget that dedicates nearly $4m in new investments in wage and benefit improvements for all employees. This important increase is the result of a comprehensive wage equity project designed to provide equity, clarity, transparency, sustainability and competitiveness, in alignment with the museum’s values. To that end, we have proposed an average 9% wage increase for staff represented by the UAW Local 2110, more than the union’s own proposal for 4%.We respect the rights of our staff to organise and remain focused on reaching an agreement with UAW Local 2110.”

More Than 1,500 Part-Time Faculty Are on Strike at the New School, Home of Parsons School of Design