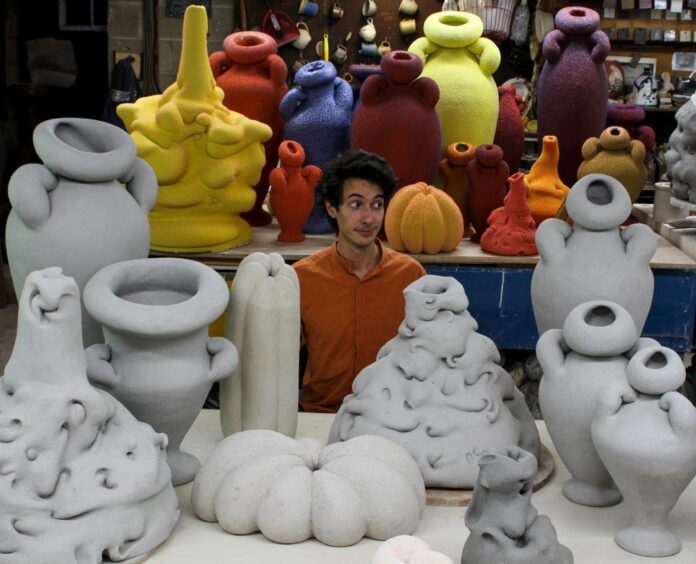 Before artist Maxwell Mustardo moved into his studio in Quakertown, New Jersey, it was the late ceramicist Toshiko Takaezu‘s workspace.

Takaezu, who died in 2011 at age 88, prioritized artistry over functionality. Much of her work is still stored in the studio and has provided lasting inspiration to Mustardo, whose forms are at once organic and synthetic, beholden to classic tradition and contemporary sensibilities.

There are Roman-inspired amphora, as well as Mustardo’s signature shape, a doughnut-like form he’s dubbed the “toroid,” and a stretched out version called the “gadroon.” The work appears at once organic and synthetic, classical and utterly contemporary.

The artist’s first New York solo show, at Midtown’s Culture Object, features some 30 works, including his largest piece to date, an amphora nearly five feet tall. Ahead of the opening, Mustardo gave Artnet News a glimpse of the space and how it shapes his practice. 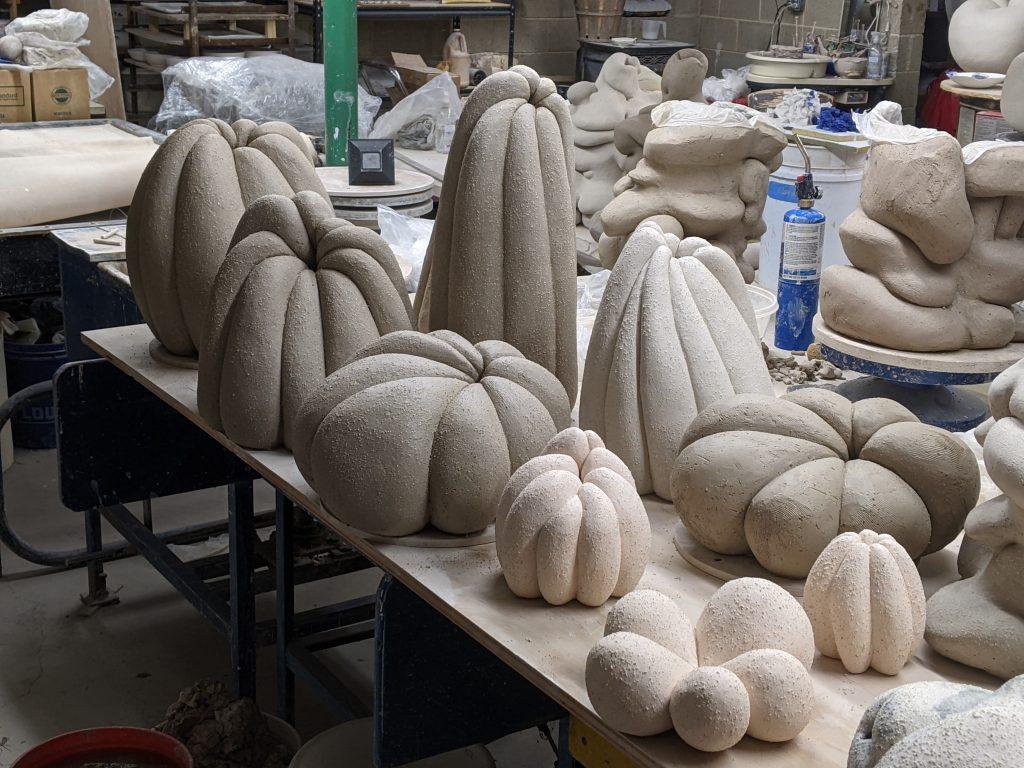 Can you send us a snap of the most indispensable item in your studio and tell us why you can’t live without it?

All of my work is made directly by pinching clay with my hands. It’s a hack response, but nothing happens without my hands: tools arrive afterwards just to fine tune what they have done. My Shimpo banding wheels are very dear to me and relevant through almost each stage of the making process.

What is a studio task on your agenda this week that you are most looking forward to?

By far, my favorite part of the ceramic process is always working with wet clay. Returning to a large lump of moist possibility is always titillating—much of what happens afterwards is a series of successive narrowing of possibilities. 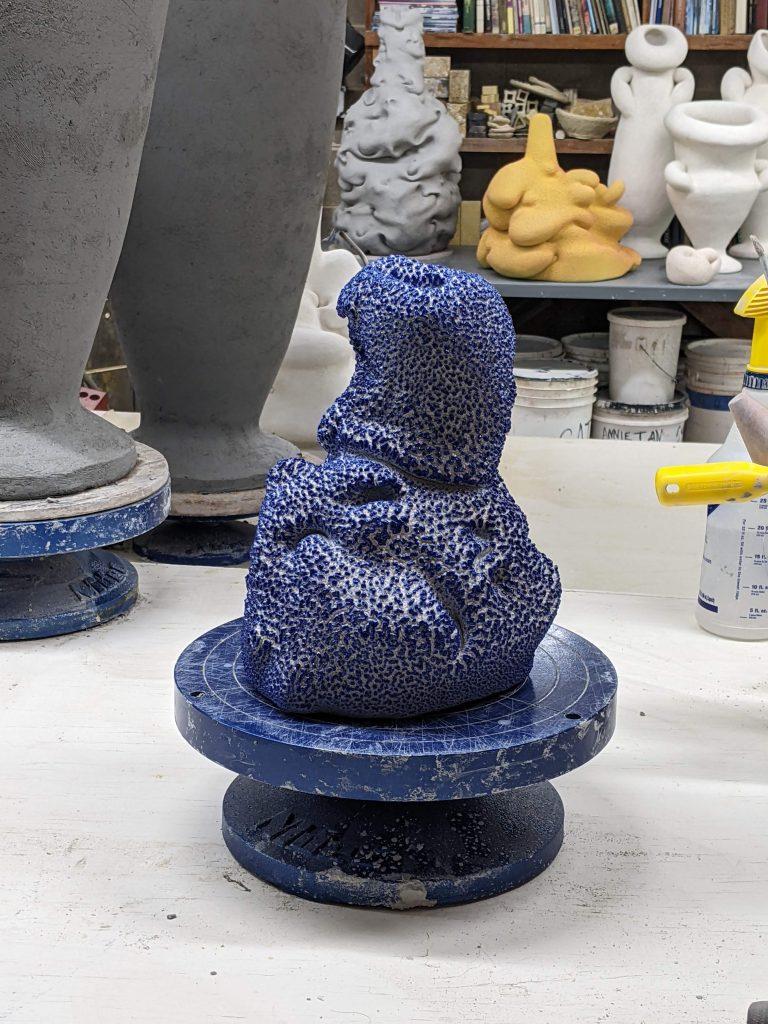 I have no standard absolutes. I listen to podcasts, audiobooks, and lectures when I can split my attention readily, or classical and jazz music when I should focus or when others are in the studio, and sometimes just silence when I need it.

Who are your favorite artists, curators, or other thinkers to follow on social media right now?

Glenn Adamson comes immediately to mind—the inexhaustible craft advocate, author, curator, and critic. He both deals with and thinks through social media in very interesting ways.

Garth Johnson, a curator at the helm of one of the greatest collections of American ceramics, at the Everson Museum of Art in Syracuse, has shaped many excellent exhibitions illuminating this very brief but very dynamic history. His background as a maker and advocate for the crafts at large gives him a particularly insightful and expansive perspective. 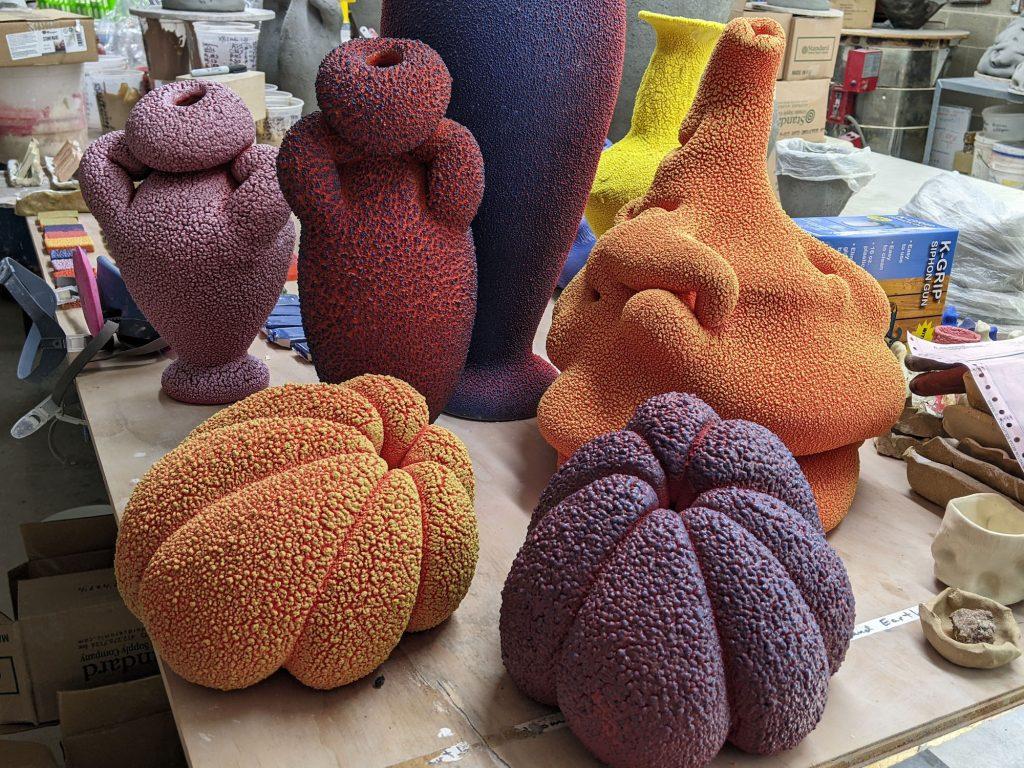 Work in Maxwell Mustardo’s studio. Photo courtesy of the artist.

I’m a big believer in working consistently and pushing through any block. I tend to make very little progress without physically working through ideas in the studio. Solutions can be found at various stages in the process: Testing glazes sometimes presents a new opportunity for form, or a drawing presents a form that requires novel surface treatments, etc.

Shows do require me to insert bookends into an otherwise constant stream of production, which is helpful for me because I am very rarely stuck and more likely to be in need of parameters that help shape and define my production.

When perusing museums and galleries, I go with a constructive approach so negative reactions don’t play a big role. I tend to prefer work that pushes materials in novel and extreme ways. I’m a bit of a formalist when it comes to judging contemporary work. I want to be taken in and absorbed by indexical information, rather than esoteric symbols. I often internally redeem art that I don’t particularly like by situating it within the history of art and discard the formalist approach. Taking a broader view of history enriches everything. 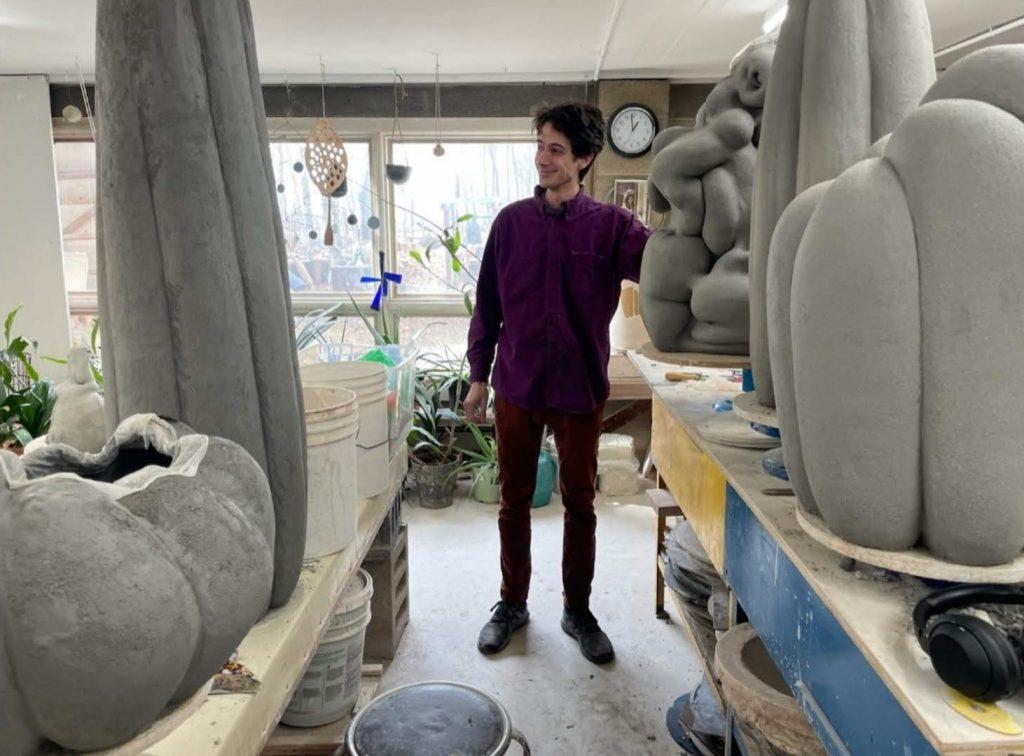 Maxwell Mustardo in his studio. Photo courtesy of the artist.

I don’t usually have source material with me in the studio. Drawing and research are essential but happen outside. While at work I tend to accumulate examples from different series in different stages of drying, firing, etc. This interaction can then result in new hybrids. My outside research, as well as my drawing practice, help me to make bigger conceptual and formal leaps.

As an example, this week I have been making Robert C. Turner-inspired bottle forms while listening to lectures on Lucio Fontana and looking at Italian (shaped canvas) artists like Agostino Bonalumi and Enrico Castanelli. I’m really enjoying absorbing these disparate takes on gesture and form. 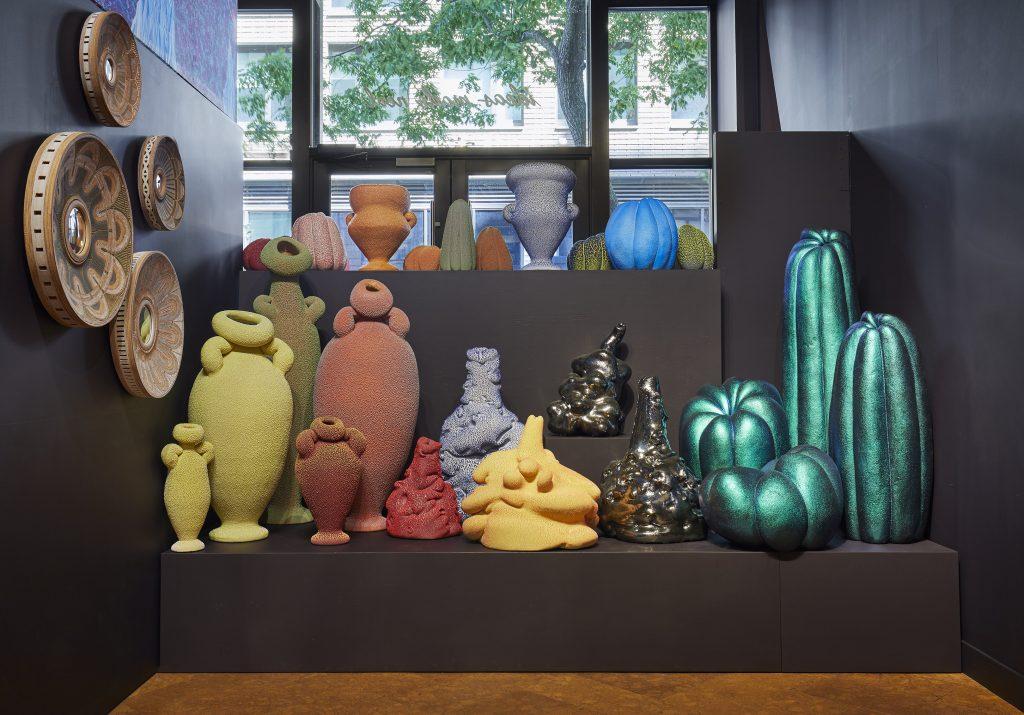 What is the last exhibition you saw that made an impression on you and why?

“Shapes from Out of Nowhere” at the Metropolitan Museum of Art [in New York] was a once-in-a-generation exhibition showcasing recently donated objects from Robert Ellison, Jr.’s, collection, and I found it appropriately inspiring. It was exciting to see the Met give recent American ceramics a spotlight, and I look forward to seeing how those objects will be incorporated into their long term displays.

What made you choose this particular studio over others?

I have been working at Toshiko Takaezu’s studio on and off since high school, when my mother’s college roommate’s ex-husband, Donald Fletcher, brought me by for a visit. Having grown up a mile down the road, the area is very dear to me and full of long-lasting relationships. After doing multiple residencies around the country and abroad for a few years, this studio offers stability, familiarity, and many novelties associated with its history. 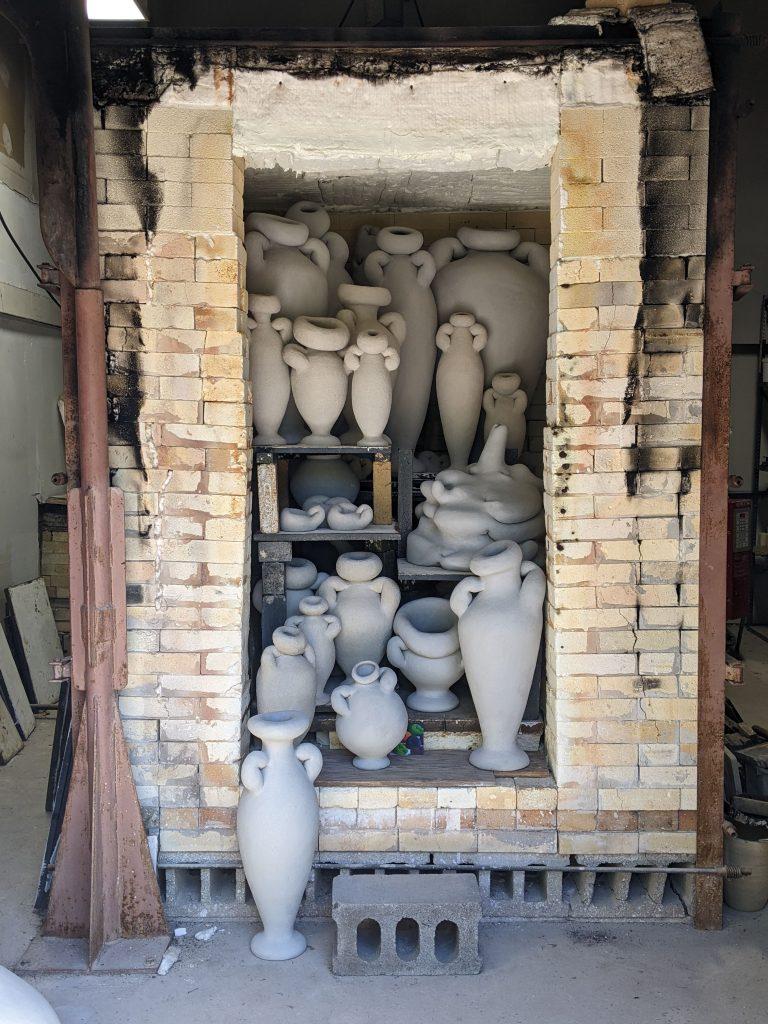 Loading the bisque kiln at the Takaezu studio. Photo courtesy of Maxwell Mustardo.

Given that Toshiko’s studio space has a venerable history in 20th century ceramic art, as well as being a literal trove of her work, it’s difficult not to hold myself to a certain standard and consider the context of my work in that light. My work tends to evolve mostly through an internal logic, although the environment (my available facilities and space) do dictate both limitations and create possibilities. I have been working primarily in a smaller scale for the last few years (about 24-inch height at most) because of facility restrictions and some surgery-related limitations, but now, Toshiko’s 72-by-48-inch kiln has lured me into working at a new, larger scale.