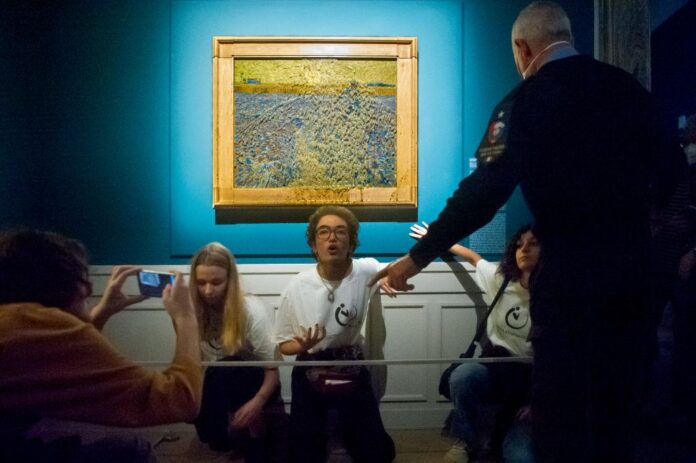 A growing number of climate protests are targeting art at Western European museums. On Friday, three activists for Ultima Generazione (Last Generation) threw pea soup at Van Gogh’s (1888) at the Palazzo Bonaparte in Rome. The work was on loan from the Kröller-Müller Museum in Otterlo, the Netherlands for a special exhibition about Impressionism.

“We shouldn’t get angry about a painting that is protected by glass and will be clean tomorrow,” declared one protestor. “And we don’t get angry because we don’t know that we are losing food and water.”

The work was protected by glass and therefore unharmed. The four young people involved in the action were questioned by museum security guards.

“Attacking art is a vile act that must be resolutely condemned,” said Italy’s new right-wing culture minister Gennaro Sangiuliano in a statement following the attack. “Culture, which is a key part of our identity, should be defended and protected and not used as a megaphone for other forms of protest.”

Just a day later, two activists taped themselves to the frames of two works by the Spanish master Goya at the Prado in Madrid on Saturday. The frames were slightly damaged and “+1.5 C” was written on the wall between the paintings.

The pair wore t-shirts reading “Futuro Vegetal” (Plant Future). The activists were removed by the police.

“We reject cultural heritage being jeopardized by its use as a means of protest,” said the museum in a statement.

Many onlookers are wondering whether the onslaught of attacks is reaching its peak, or whether it is set to keep growing.

After a month-long campaign of civil resistance in the UK throughout October, Just Stop Oil declared a temporary pause on its protests to give the UK government time to respond. This amnesty ended on Friday after the group received no response, meaning they have now promised to “escalate our legal disruption against this treasonous government.”

Some activists are starting to face the consequences of their actions. Three people involved in the attack on Vermeer’s at the Mauritshuis in The Hague have now been sentenced to two months in prison, according to