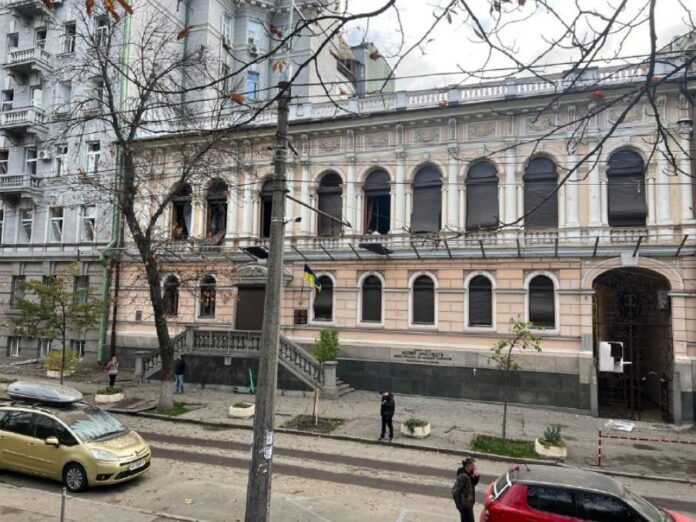 Russian President Vladimir Putin ordered strikes against Ukraine’s civilian infrastructure following a blast that took down part of a critical Crimean bridge on 8 October. The attack on the Kerch Strait Bridge, a 12-mile span that links Russia to Crimea, the Black Sea Peninsula that Russia annexed from Ukraine in 2014, was carried out early on Saturday right after Putin’s 70th birthday the previous day. He inaugurated the bridge in 2018 by personally driving a truck across it. On Sunday he called the blast “a terrorist act” plotted by Ukraine’s special services.

“As a result of the massive rocket fire in Kyiv, facades, roofs and interior elements of a number of cultural and educational institutions were damaged,” Tkachenko wrote in a Facebook post on Monday, listing institutions ranging from the Taras Shevchenko Kyiv National University to the National Philharmonic and the Museum of the Ukrainian Revolution of 1917-21.

Tkachenko says that windows have been broken in the Khanenko Art Museum, the T. Shevchenko Museum, the Kyiv Art Gallery, the National Research and Restoration Center, the Memorial Museum-apartment of Mykola Bazhan and Pavel Tychyna, the National Natural Science Museum of the National Academy of Sciences of Ukraine, and the Museum of the History of the City of Kyiv. Residential buildings, which he describes as “architectural monuments of the 19th century”, were also damaged.

In an address to the nation on Monday night, Ukrainian President Volodymyr Zelensky said that Russia was deliberately targeting cultural sites at the heart of Ukrainian identity.

“The crossroads in Kyiv where I stand. The crossroads of Volodymyrska Street and Shevchenko Boulevard. That’s the target,” said Zelensky. “And right behind me there is a playground in Shevchenko Park, which also became a target for a Russian missile. But it is not just in Shevchenko Park. It is on one of the main museum streets of Kyiv. In particular, the Khanenko Art Museum was damaged by this attack by terrorists.”

However, Russia’s Ministry of Defence claims that its missiles targeted “objects of military management, communications and energy”.

Zelensky vowed that the country “will restore everything” and that “Kyiv will also survive this onslaught of terrorists who have no history, no tradition, no culture.” First Lady Olena Zelenska tweeted a viral video of Ukrainians singing while sheltering in a Kyiv subway station during Monday’s assault.

“They are trying to intimidate and break us—but Ukrainians sing,” wrote Zelenska. “Truth is on the side of our nation. Ukrainians are not afraid, they know: [the] enemy is mad because we are winning.”

Tkachenko says in his Facebook post that immediate on the ground efforts were made “to minimise the negative consequences of the damage” and urgent “negotiations with international partners” were held. He added that the country is “working on attracting international funds and aid to overcome the consequences of shelling”.