Home News Collectors throng Kiaf and Frieze as Seoul stakes its claim as an... 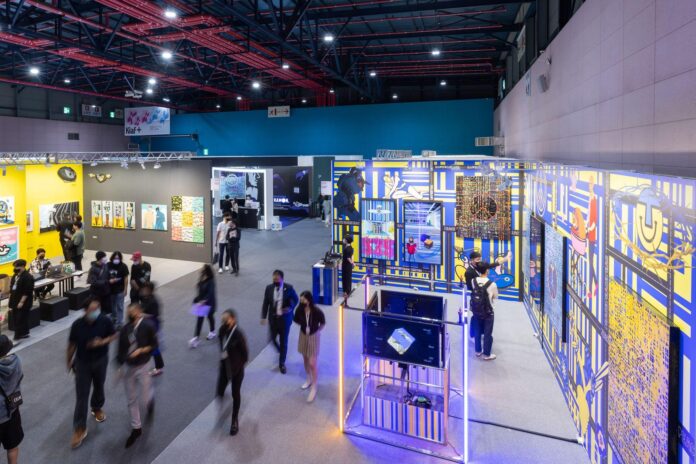 After much anticipation, Seoul is finally having its moment at the centre of the art world. The highly anticipated Frieze Seoul fair launched today (until 5 September) at the Coex Center, an upscale convention complex in the famously rich Gangnam area, alongside mainstay event Korea International Art Fair or Kiaf (until 6 September).

In their opening hours, both fairs experienced a constant flow of enthusiastic, curious collectors and visitors from Korea and abroad. While Kiaf is hosting 164 galleries on the centre’s first floor, Frieze Seoul features more than 100 galleries from 20 countries, in addition to 18 galleries participating in Frieze Masters, on the complex’s third floor.

Several industry insiders at Friday’s Frieze Seoul preview observed that both international and regional galleries participating in the new fair had filled their stands with exceptional works.

“In comparison to Kiaf last year, which we participated in, the crowd, the booths, the galleries, the quality and the curation of the booths is very different,” says Somin Jeon, a director at Various Small Fires. “I think [Frieze Seoul] will help Koreans understand what a better art fair would be.”

Jungmin Cho, curator and director of White Noise, an experimental commercial art space in Seoul, says local artists were worried that Frieze’s debut in Seoul would not measure up to its existing editions in London, New York and Los Angeles. “But as I saw, it looked really good, in terms of quality,” she says.

Brett Gorvy, co-founder of blue-chip gallery conglomerate LGDR, concurs. “If you look at the quality of the booths here, you will see the galleries have been very confident and optimistic in terms of what they brought,” he says. “Everyone has really aimed at a high level because there’s a belief that there’s a buying market here that has potential.”

Milan-based dealer Javier Perés, whose gallery Perés Projects also has locations in Berlin and Seoul and is showing in Kiaf, is very interested in the local market. “Our focus for this fair has really been Korean clients, both institutional, public and private ones, and we have had an incredible response from them,” he says. “We were able to confirm a number of important sales including to two institutions today [Friday].”

He adds, “At Kiaf, we saw a ton of mega VIPs early on and a lot of museum people. We have seen collectors from the West and other parts of Asia, but really for us, the time is really to focus on Korea because we’re planning on opening a larger space in the next year.”

There is a palpable appetite for international art in the aisles and stands at both fairs. At Frieze on Friday, crowds thronged the stands of mega galleries David Zwirner, White Cube, Hauser & Wirth and others. Attendees’ global appetites seemed to be reflected in the sales reported during the opening hours of the fair. David Zwirner sold multiple paintings by Oscar Murillo at $280,000 each, a sculpture by Carol Bove for $400,000, a sculpture by Donald Judd for $850,000 and a new painting by Katherine Bernhardt for $250,000. Hauser & Wirth reported sales of 15 works by international artists including George Condo, Mark Bradford, Rashid Johnson, Avery Singer, Pipilotti Rist, Camille Henrot and Glenn Ligon in the first few hours. Early sales from Thaddaeus Ropac’s stand included works by Tom Sachs and Martha Jungwirth, among others, with holds on a few major works including a Georg Baselitz painting priced at €1.2 million.

Some mid-sized galleries at Frieze also reported significant sales on the fair’s first day. Chicago- and Paris-based Mariana Ibrahim sold Peter Uka’s painting Ideal Reader (2022) for $90,000, as well as all three works by the famous Ghanaian painter Amoako Boafo for $90,000 each. And Various Small Fires, which has locations in Seoul, Los Angeles and Dallas, sold out of all the Alex Becerra works in the gallery’s Frieze stand before the fair even opened (the gallery is also showing textile works by Diedrick Brackens).

“We continuously have a high volume of inquiries regarding Alex Morton and Diedrick Brackens works but we’re only placing Brackens’s artworks with institutions at this point,” Jeon says.

Asian galleries also held their own at both Kiaf and Frieze, making it very clear the region remains the ascendant force in the market. Art fairs are rarely known for their strongly curated special showcases, but the inaugural Focus Asia section at Frieze Seoul co-curated by Christopher Y. Lew, the chief artistic director at the Horizon Art Foundation and NFT (non-fungible token) platform Outland, and Hyejung Jang, curator at Doosan Art Center, stands out with stands galleries such as Seoul’s own P21, Jakarta-based ROH Projects and others.

Kiaf is shining a spotlight on the domestic scene with its satellite fair Kiaf Plus (until 5 September), featuring emerging and new media art showcased by more than 70 experimental local galleries at Seoul Trade Exhibition and Convention. There, the likes of popular ultracontemporary art space Cylinder sold all the works on their stand artworks by 32-year-old British figurative painter Tristan Pigott on the fair’s first day. Cylinder’s founder, artist and curator Dooyong Ro, says the crowds at Kiaf Plus showed no signs of letting up even on the fair’s second day, when Kiaf and Frieze began welcoming VIPs.

“I think people have understood this is not just about an art fair,” Gorvy says. “This is about Seoul being a cultural centre, an international centre, and if it has the possibility to be equal to Hong Kong or other areas in Asia where you’ve got these international art fairs.”

Doris Salcedo on her new work, a ghostly reflection on gun violence