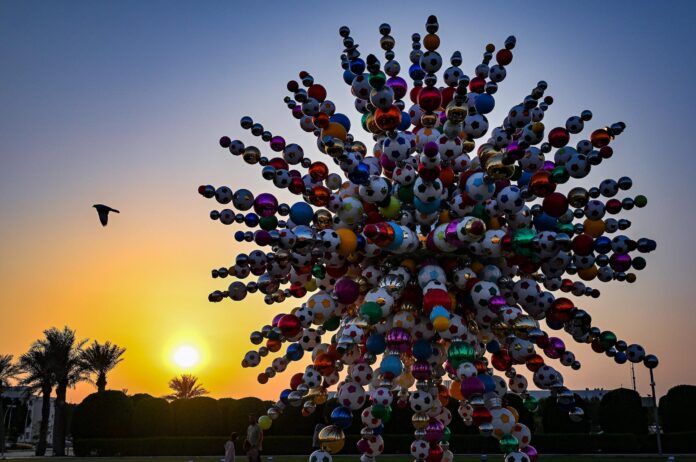 A new monumental sculpture commemorates the workers who built Qatar’s infrastructure for the World Cup as the controversy-riddled competition winds down.

Come Together by the Korean artist Choi Jeong Hwa, commissioned by the state-run Qatar Foundation, is a 12-metre-high stainless steel and plastic burst of bright pastel- and neon-coloured orbs strung together along 100 branches. Fashioned to resemble the tufts of a dandelion, the spheres include footballs and oversized baubles, interspersed by Qatari kitchenware and industrial safety helmets.

Football fans are gearing up for the World Cup final this Sunday, the first time the quadrennial tournament has been staged in an Arab country. Hosting the event has cast a harsh light on Qatar’s stance towards the LGBTQ+ community, as well as charges of bribery this week to allegedly tone down European criticism of its treatment of workers.

Qatar has acknowledged between 400 and 500 migrant workers died during World Cup preparations, while watchdogs have put the number in the thousands over the past dozen years. The hydrocarbon-rich state spent an estimated $220bn on seven new stadiums, a metro, hotels and more to host some 1.3 million ticket holders at the month-long event. The scale and speed of construction came at the cost of worker welfare, Human Rights Watch said.

Choi tells The Art Newspaper his work will serve as a legacy for “the men who helped build the stadiums for the tournament. It is a symbol of appreciation for their efforts and is intended to ensure their role is recognised in a prominent and lasting way.”

Unveiled before the World Cup began in November, Come Together looks at the sunnier side of workers’ contributions in a country dependent on foreigners to keep its economy running. Some 2 million migrants account for almost 95 percent of the total labour force in Qatar, a country of 3 million people.

“In this artwork, we’re not taking a position or sending a message,” Layla Bacha, the project manager of the art portfolio at Qatar Foundation, says. “But we also recognise that there is a lot to be done” on improving workers’ conditions. The sculpture “is to spark the debate and to then hear what the public has to say about it.”

Some Qatari artists did not wait for the World Cup, and the ensuing media scrutiny, to wade into the debate. At the nearby Mathaf: Arab Museum of Modern Art, Street Language by Farhaj Daham pays homage to Qatar’s workers in a mixed media work on canvas from 2011.

The Qatari-American artist Sophia al-Maria looks at another side of the World Cup in her current solo show at Mathaf. A video work of flag-waving men and boys on Doha’s streets rejoicing after their government clinched the World Cup bid records a supercharged masculinity that borders on bedlam.

Come Together stands on the grounds of the Qatar Foundation-run Education City, home to the Rem Koolhaas-designed national library and eight satellite campuses of Western universities. The foundation’s 150-piece collection of public art includes work by Damien Hirst, Tony Cragg and M.F. Husain, all part of the desert country’s sweeping cultural development plans.

Art won’t provide the “solution” to a problem like labour abuses but may shape how Qataris view it, Bacha says. The newest addition to the foundation’s collection “is a celebration of the first World Cup in the Arab world. To achieve this, people came from all around the globe to work together. It was the workers who made this happen, and we want to recognise that,” she says.

‘I Was Really Surprised’: Watch the Late Artist Mike Kelley Reflect on the Many Misinterpretations of His Stuffed-Animal Installations

Han Shot First… But You Can Shoot Last: The Original ‘Han Solo Blaster’ From ‘Star Wars’ Is Heading to Auction