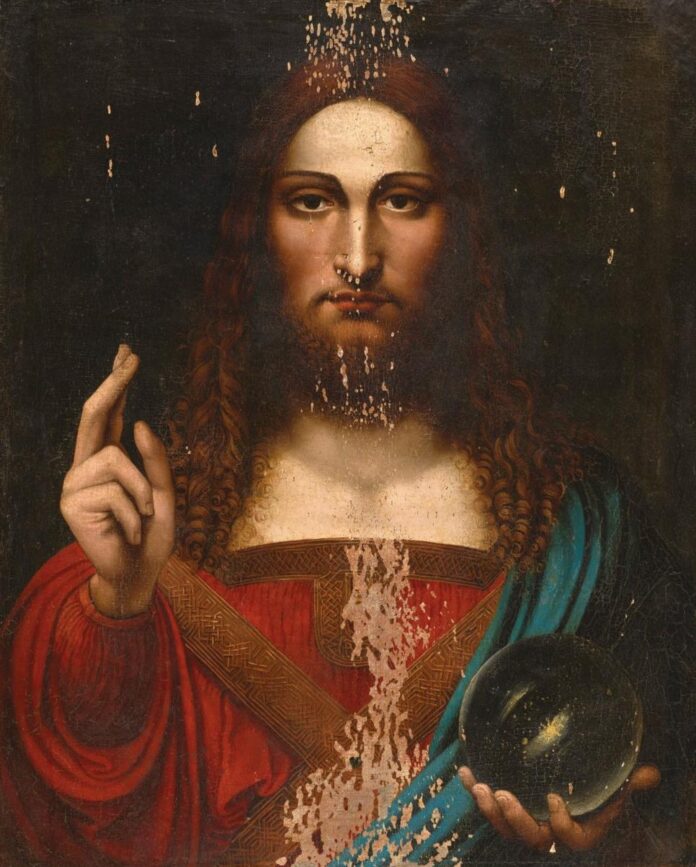 A considerably damaged late copy of the Salvator Mundi by Leonardo da Vinci has achieved €1m (with fees) at auction against an estimate of €10,000 to €15,000. Sold in an online Old Masters sale organised by Christie’s Paris on 28 November, it represents an extraordinary price for a work by an unknown artist.

The painting, measuring 63.2cm by 51cm and executed on poplar panel is described as “Italian school, [around] 1600, after Leonardo da Vinci“, in the auction house’s catalogue notes. If this date is correct, there is no way this work comes from the workshop of the artist, who died in France a century earlier.

According to Pierre Etienne, Christie’s international director of Old Masters and 19th century, no forensic examination on the work’s pigments has been conducted; rather a condition report was commissioned by the auction house. Signed by an independent restorer, Bernard Depretz, it indicates that there are “numerous small losses“, visible in the catalogue online, “on the red garment of Christ, on the beard, above the head, on the background and on the globe“. An ultraviolet examination shows several traces of restoration, but, according to the report, “as the important parts of the painting have not been altered, the painting can be considered to be in a very good state of conservation.“ The panel is also said to belong to a family in southern France, but comes without any record of a longer historical provenance.

In his 2019 catalogue for his Leonardo show at the Louvre, Vincent Delieuvin, the curator for Italian painting, listed 22 known (and more-or -less faithful) copies of Leonardo’s Salvator Mundi—including this one. This version belongs to a “family” of three compositions. Of these, the one considered to be of the highest quality, has vanished since an auction sale in 1962. It could have been painted in Leonardo’s workshop, and was listed in the former collections of Richard Worsley and Victoria Alexandrina Hare and her husband Charles Anderson-Pelham, the Earl and Countess Yarborough, according to a photograph seen by The Art Newspaper. These three copies might be inspired by an intermediate composition, as they show the blessing right arm in a position and with a sleeve cuff similar to a preparatory drawing of a drapery, belonging to the royal collection in Windsor, which were corrected later by the artist.

The extraordinary price paid for this copy shows the power of attraction of the Salvator Mundi from the Cook collection, now the property of the Kingdom of Saudi Arabia, after having been bought in 2017 at Christie’s for $450m by Prince Mohammad bin Salman. The painting has not been seen since, contributing to an aura of mystery and fuelling rumours about its fate. “Everything about da Vinci triggers the wildest passions,“ Pierre Etienne says, recalling the €2.9m achieved by a 17th-century copy of the Mona Lisa by Christie’s in an online sale in 2021. It belonged to a collector and dealer, Raymond Hekking, who had bought it for the equivalent of €5 in southern France, and remained convinced, until his death in 1977, that it was the real thing.