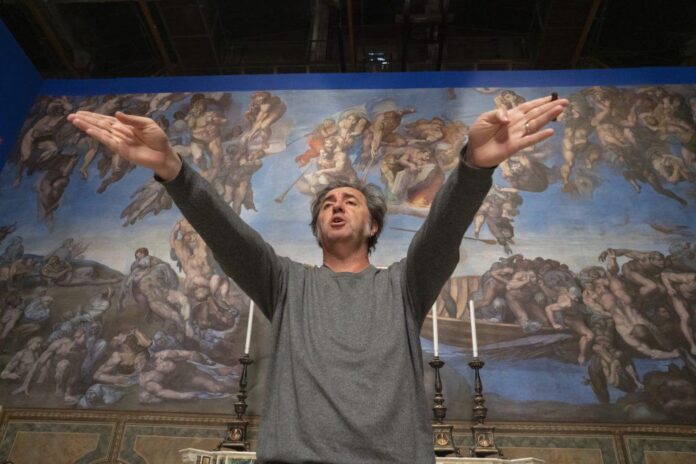 The Vatican generally forbids filming inside the Sistine Chapel, which has forced many film productions to get creative. It’s a mammoth challenge: the ceiling alone is 131 feet long by 43 feet wide, only a bit smaller than a hockey rink. Below, we rank some of the major recreations from throughout film history, revealing how they did it—and who did it best. 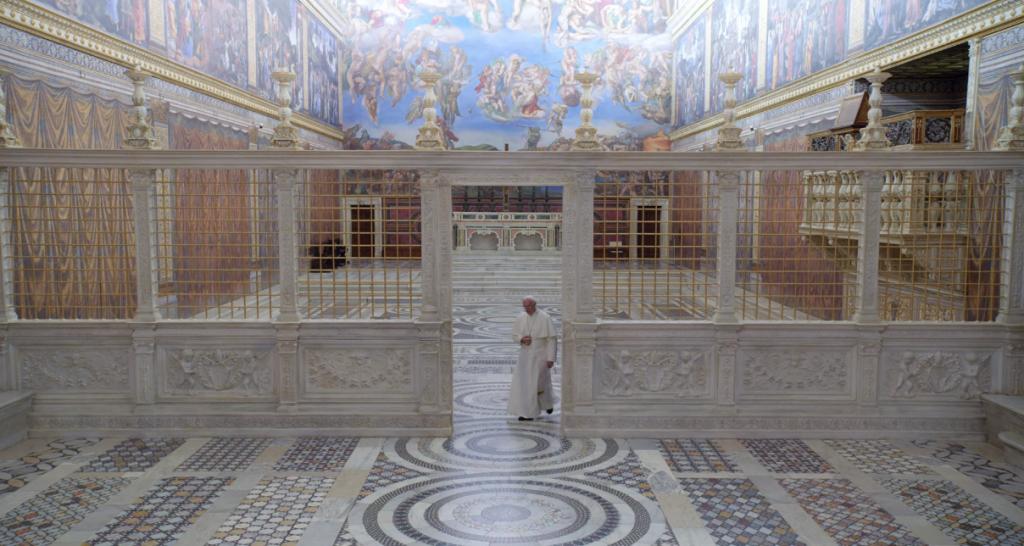 Film still from Netflix’s The Two Popes (2019). Courtesy of Netflix.

They painted reproductions of the Renaissance artist’s figures which were then photographed and printed onto sheets of plastic film. The film was transferred to the walls of the replica chapel and covered with a substance which made the pigment seep into the plaster underneath, just as it does with real frescoes.

Verdict: No other film recreation of the Last Judgment has replicated the colors and light of Michelangelo’s masterpiece more effectively. Unfortunately, the $5 million recreation was destroyed after filming. 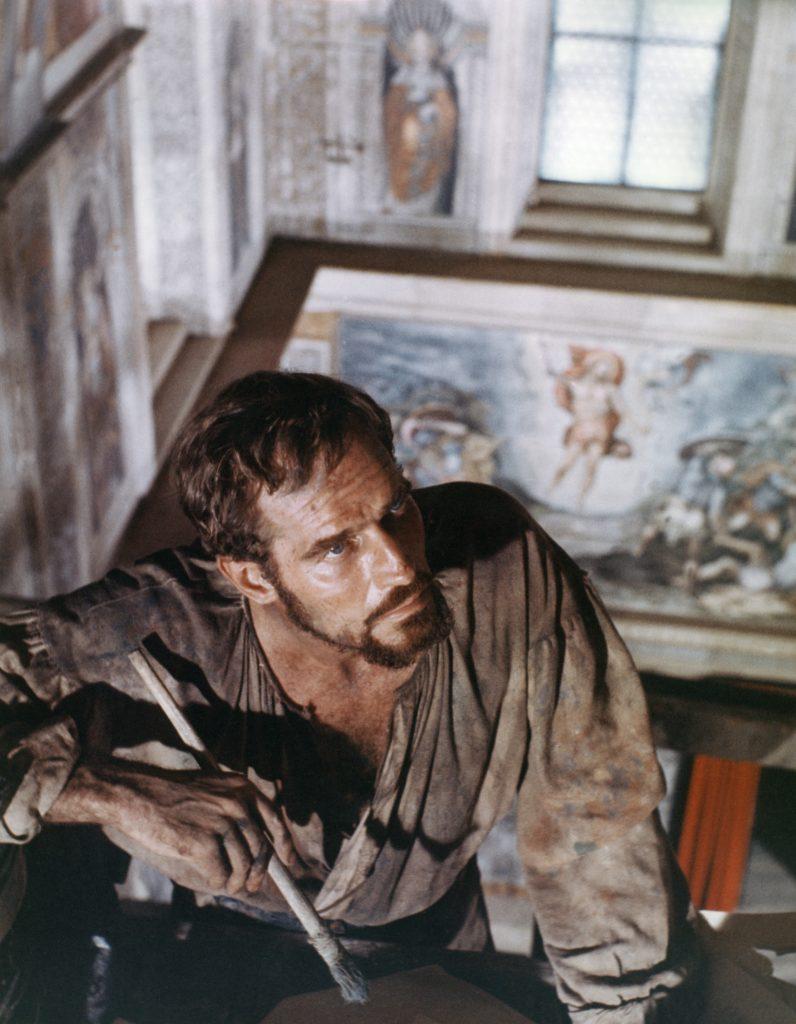 Actor Charlton Heston on the set of The Agony and the Ecstasy. (Photo by Sunset Boulevard/Corbis via Getty Images)

The Setup: Charlton Heston is Michelangelo working on the Sistine Chapel ceiling from 1508 to 1512 for Rex Harrison’s Pope Julius II in Carol Reed’s epic rendition of Irving Stone’s novel. As the film progresses, the plaster covering the ceiling is gradually removed to reveal photographs of Michelangelo’s original frescoes underneath.

Behind the Scenes: Taken decades before the Sistine Chapel’s comprehensive restoration from 1980 to 1994, the photographs show paintings which are dark and dirty—but the filmmakers cleverly lean into these limitations, often opting to show the ceiling late at night, with Michelangelo working by candlelight.

Verdict: Filmmakers have largely avoided the challenge of physically replicating Michelangelo’s ceiling frescoes and rendered them digitally instead. For the ambition and achievement of production designer John DeCuir, who was nominated for an Academy Award for his efforts, takes second place on our list.

The Setup: Jude Law plays a young American cardinal who is elected Pope and unleashes a hard-line revolution in this stylish and strange T.V. series created and directed by Academy Award winner Paolo Sorrentino. In season two, , Pope Jude Law is incapacitated and Pope John Malkovich steps in to lead the Catholic Church.

Behind the Scenes: For the first season, production designer Ludovica Ferrario re-created a section of the Sistine Chapel at the Cinecitta’ film studios in Rome, physically replicating only the bottom portion of Michelangelo’s Last Judgment fresco, using images printed on wallpaper. For season two, she went bigger, creating a full-size replica of the Sistine Chapel at Cinecitta’. According to , it measured 581,251 square feet and required 25 painters and 40 builders to create.

Verdict: In a key scene at the conclusion of the series, the two popes meet alone in the Sistine Chapel to discuss the future of the Church. Overall, the replica is effective but the reconstructed Last Judgment is dark and flat; presumably without the fresco effect deployed so successfully by the makers of the 2019 Netflix film, the colors and light of Michelangelo’s apocalyptic vision are nowhere near as beautiful in this version. Tellingly, the director did not attempt any lingering close-ups of the saved and the damned on their day of judgment. 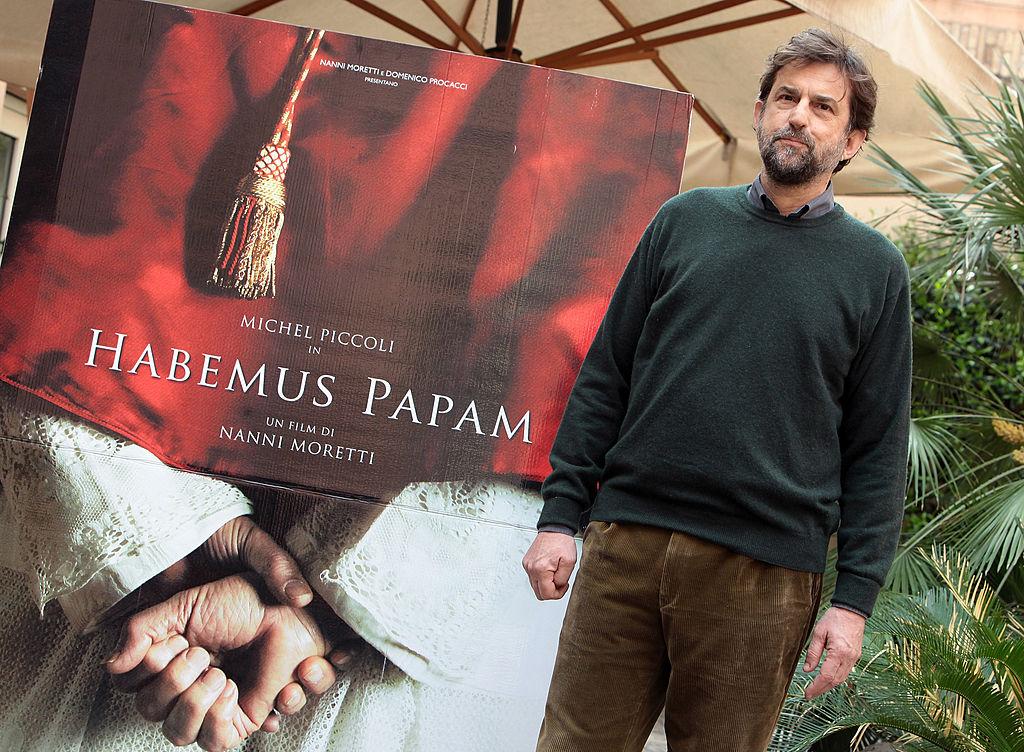 The Setup: An unsuspecting cardinal is elected Pope and panics at the demands of his new office. A therapist is brought in to help him cope in this Italian/French comedy directed by Nanni Moretti.

Behind the Scenes: Like most before him, Moretti’s request to shoot inside the chapel was rejected by the Vatican. Again, his replica was produced at Cinecitta’ under the supervision of production designer Paola Bizzarri. “The director wanted the actors to move around in an accurate reconstruction of the space because he doesn’t like using visual effects,” she said in an interview. “At first it was daunting because the margin of error was so small.” To recreate Michelangelo’s frescoes, images of the artist’s originals were printed onto canvas and touched up by set painters.

The Verdict: Once again, the replica is convincing but utterly lacking in the incandescent color and light which brings ’ Last Judgment to life.