Home News Dealer Shows at Russian State-Backed Fair After Coming Out in Support of... 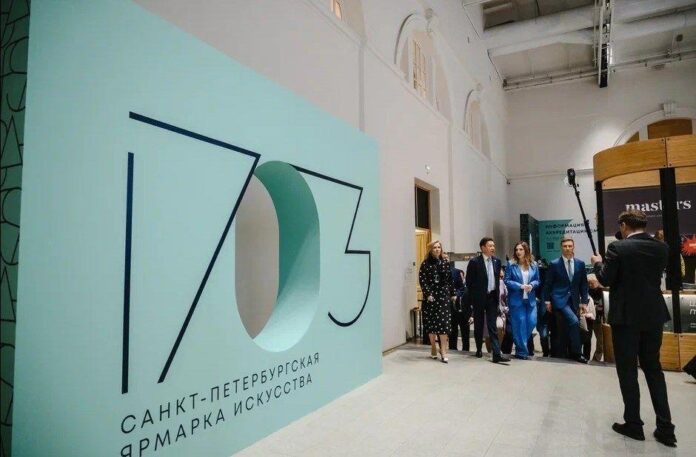 RUSSIAN GALLERY PLAYS TO BOTH SIDES

It’s now been five months since Russia invaded Ukraine, igniting a devastating war in which thousands have been killed, cities have been leveled, and critics have blasted the Russian government for alleged war crimes. Artists and dealers have since fled Russia en masse, condemning the war and separating themselves from the war machine as much as possible. Many added their names to a petition that amassed 17,000 signatures in February condemning the war as “a terrible tragedy” that collaterally jeopardizes Russia’s cultural standing. The petition drew the ire of the Kremlin, resulting in threats to those who signed it. Some especially bold actors even staged protests in Moscow. Suffice to say, there is a serious rift between certain members of Russia’s cultural circles and those inside the government.

As the turmoil continues, the country—suddenly reduced on the world stage—has made attempts to assert that its culture sector is alive and well. One such attempt to create the illusion of a thriving fine art scene was the 1703 art fair, which was staged in St. Petersburg in June the same week as many well-heeled collectors rushed into Switzerland for Art Basel.

Sixteen galleries, all of them from Russia, exhibited at the fair, which took its name from the year St. Petersburg was founded. And according to official reports, it was a financial marvel: the event, sponsored by Russian oil conglomerate Gazprom, reportedly put on display artwork that was estimated to be valued at 200 million rubles, or about $3.4 million.

In effect, the fair catered to our time’s axis of evil.

One of its participating dealers, Wet Paint can reveal, previously spoke out in condemnation of the war through one gallery, but took part in the St. Petersburg show under another name.

On February 27, Moscow’s Osnova Gallery posted to its Instagram an image of a dove with the caption “#nowar.” Two of its artists—Kirill Savchenkov and Alexandra Sukhareva—even withdrew from representing Russia at the country’s Venice Biennale pavilion in solidarity with Ukraine.

Yet Varvara Muratova, Osnova’s managing director, still took part in 1703 under the name Azot, a side business. Reached for comment, Muratova confirmed that the two entities are not legally separate, and a closer look at the Azot website reveals that any financial transactions done online with Azot go right back to Osnova, which appears on the website spelled in Cyrillic (Основа). 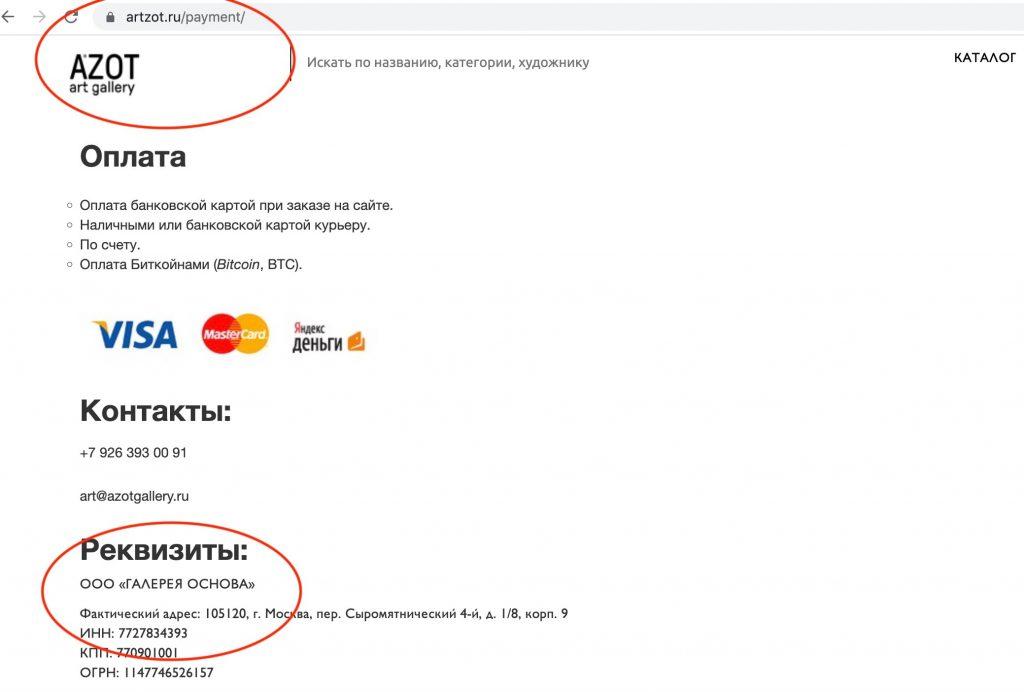 On Azot’s website, payment is remitted to Основа, which is Russian for Osnova.

“Since opening a business in Russia is not easy and involves a lot of expenses, Osnova helps in aspects concerning bureaucracy,” Muratova said of the financial tie.

Savchenkov, one of the Osnova artists who pulled his work from the Russian Venice pavilion, told Wet Paint he had no idea about the relationship between Azot and Osnova. He also condemned the existence of the fair, calling it “extremely awkward for the current context.”

DUST UP IN THE NADA NOODLE

When a gallery joins the New Art Dealers Alliance, it is granted access to something called the NADA Noodle, a Google group email thread in which every member—that’s more than 120 gallerists now—can ask for advice, contacts, or help of some kind. I’ve heard it described as a circle of trust, in which dealers can canvas each other for art-handler recommendations, ask to borrow pedestals, or put out feelers about collectors they have questions about.

Paola Oxoa, the owner of New York’s Mother Gallery, a NADA member, asked one such question to the thread recently. She told Wet Paint that a collector named Talal Abillama was several months late to pay an invoice after he bought a drawing and a sculpture at NADA New York, which caused her some concern. But the responses within the channel were generally positive, suggesting she had nothing to worry about.

“I read messages from two dealers that I don’t know, and they both vouched for him and said, ‘He’s great,’” Oxoa said.

She walked away feeling relieved that Abillama would catch up his late payments, and that further action wouldn’t be required. But Abillama, she said, caught her off guard when he called her this week, allegedly demanding to know why why Oxoa was “dragging his name through the mud.” Oxoa said Abillama became threatening, telling her she is “nothing” and to “stay in her place.” He also called off the sale.

“As a woman, it’s just triggering,” she said. “I tend to pride myself in being brave. But I’m a little scared, to be honest.”

Reached by Wet Paint, Abillama acknowledged the phone call and the cancelled sale, but denied making any kind of threat. He said he called off the deal because Oxoa was being too aggressive about payment, and he wants collecting to be an enjoyable experience.

“Of course I didn’t say she is nothing,” he said. “I told her I respect her fully. I cut off the deal and she got so pissed. She was harassing me to pay for the piece. It was so pushy. I buy so much art. I buy something almost every day. Of course I was going to pay it, but she was making a whole deal about it.”

Oxoa, who believes another dealer alerted Abillama about her message to the NADA Noodle, is now directing her ire towards that still-unidentified party.

“I have an invoice that has not been paid since May and a duty to my artists,” she said. “I reached out to this trusted group to get guidance on what to do next. And then my phone rang with a very angry man. Why would any of you do this?”

NADA has not responded to Wet Paint’s request for comment. 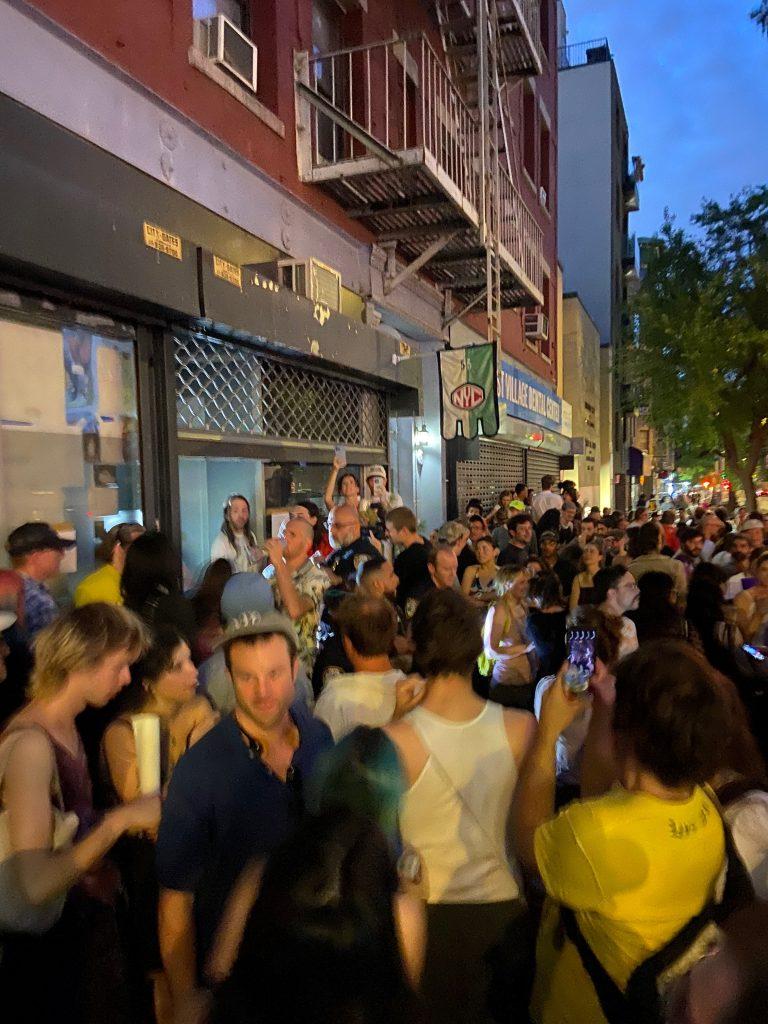 Bedlam outside of O’Flaherty’s maximalist approach to the summer group show. Photo by Annie Armstrong.

Former Various Small Fires director Joshua Oduga is opening his own project space in Los Angeles called Central Server Works this August … Sylvie Fleury is the latest artist to get dropped since the merger between the LGDR behemoth and her former gallery, Salon 94 … Kat Herriman has left her position as writer and creative director for magazine … Grimm now represents Brooklyn-based Anthony Cudahy alongside Hales and Semiose galleries… Jessica Silverman represents market superstar Loie Hollowell alongside Pace … The line outside O’Flaherty‘s Uber-democratic group show, “The Patriot,” which took submissions from anyone based in New York City that would drop off a piece, wrapped 130 yards around the block on Avenue C, and was shut down by police within an hour of opening …

*** Alex Katz wearing a t-shirt that reads “I’m not Alex Katz” in Maine *** Mary Boone paying a visit to the Barbara Kruger exhibition at MoMA *** Per Skarstedt, Tico Mugrabi, Loic Gouzer, Christoph Van De Weghe, and Alex Rotter bro-ing out—”serious gang,” commented Aby Rosen *** Gray Sorrenti taking a picture of the East Village community in the spirit of her late uncle, Davide Sorrenti, with Lucien Smith, Lua Beaulieu, Mario Sorrenti, and Louis Shannon all showing up for the snapshot *** David Zwirner throwing a party at the Bowery Hotel for the anniversary of its Platform initiative, and Miranda July, Richie Shazam, Nate Lowman, and Famke Janssen all showed up for the toast ***

It seems that people universally agree that the best party in the Hamptons is the Watermill Benefit. It was nominated for best party on Long Island by several people, including this week’s Wet Paint in the Wild Hamptons aficionado, Nicole Nadeau.

But photographer-about-town Casey Kelbaugh wrote in that perhaps the best party he’s been to out East was the benefit’s in 2016.

“We went back to Anastasiya Siro’s house I think? [Nicole] Nadeau, Ellie [Rines], and everyone else in the pool with us. Ja Rule lighting blunts. Some tops came off.”

There’s no column next week, but for when I return, I ask you to consider: What’s the absolute worst behavior you’ve seen at an opening? Write in your answer to [email protected]