Home News Did the Metropolitan Museum cover up its acquisition of a Nazi-looted Van... 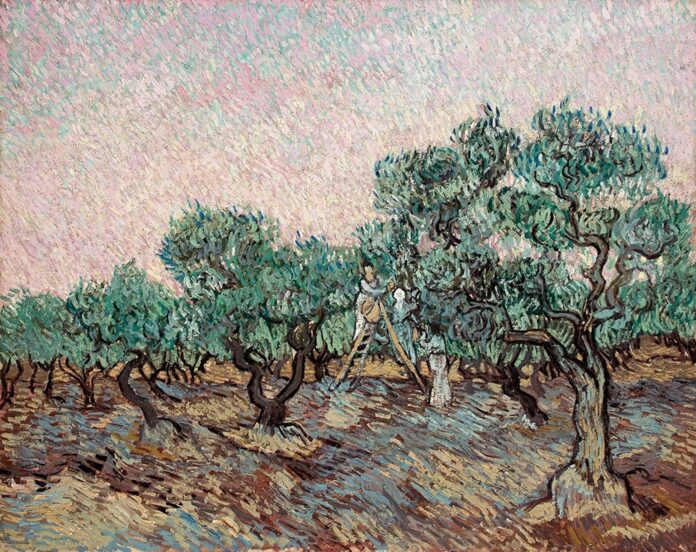 The heirs of a Jewish collector whose art was seized by the Nazis as she fled Germany in 1936 are suing the Metropolitan Museum of Art in New York and the Athens-based Basil & Elise Goulandris Foundation to secure the return of (or compensation for) a Vincent van Gogh painting.

The lawsuit, filed last week in the US District Court for Northern California in Oakland, lists as plaintiffs nine heirs of Hedwig Stern, a collector who fled Nazi Germany and eventually settled in Berkeley. The lawsuit alleges that the Basil & Elise Goulandris Foundation continues to hold the painting despite its provenance problems, and that the Met acquired it in 1956 and then “secretly sold” it in 1972 to avoid facing restitution claims.

The work in question, La cueillette des olives (The Olive Picking, 1889), was featured in Van Gogh and the Olive Groves earlier this year at the Van Gogh Museum in Amsterdam and is currently back on view at the Basil & Elise Goulandris Foundation’s museum in Athens. On the foundation’s website, its provenance does not include Stern but features a gap between 1924 and around 1948, a period that entirely covers the systematic despoliation of Jewish Germans’ wealth by the Nazis.

The complaint lists the painting’s value as “more than $75,000”, based on the minimum sum the plaintiffs claim the Met received for it, though its actual selling price in 1972 and its value today are certainly much higher. According to the Basil & Elise Goulandris Foundation website, after it was deaccessioned from the Met’s collection it was acquired by the foundation by way of the commercial gallery Marlborough Fine Art. A contemporaneous report by the New York Times suggested that the asking price for the Van Gogh was in the region of $1.5m.

The complaint alleges that the painting was acquired, quietly deaccessioned and eventually sold off at the direction of Theodore Rousseau, the museum’s chief curator and vice director, who had been a member of the Monuments Men and Women, the group of American and British curators, art historians and other specialists who sought to track down Nazi-looted art during and after the Second World War. As such, the claimants allege, Rousseau either “knew or consciously disregarded” the provenance problems surrounding La cueillette des olives (Stern actively sought its return between 1948 until 1955, according to the complaint).

“The sale of The Olive Picking met the museum’s strict criteria for deaccessioning—specifically, it was recorded that the work was deemed to be of lesser quality than other works of the same type in the collection,” a spokesperson for the museum tells The Art Newspaper. “While The Met respectfully stands by its position that this work entered the collection and was deaccessioned legally and well within all guidelines and policies, the museum welcomes and will consider any new information that comes to light.”

The plaintiffs in the case are nine descendants of Hedwig Stern living in California, Washington state and Israel. According to the complaint, they have been in contact with representatives of the Basil & Elise Goulandris Foundation, but have not been able to reach an agreement about its return. Representatives for the plaintiffs and the foundation had not responded to requests for comment at time of publication.

This is the second Nazi loot claim about a Van Gogh painting brought this month. On 13 December, the descendants of the German Jewish banker Paul von Mendelssohn-Bartholdy filed a lawsuit against the Japanese insurance company Sompo Holdings seeking the return of Sunflowers (1888).

A Short History of Surrealism

Taymour Grahne Projects will have a second space in London