Home News Did the National Gallery Botch the Restoration of This Italian Renaissance Nativity... 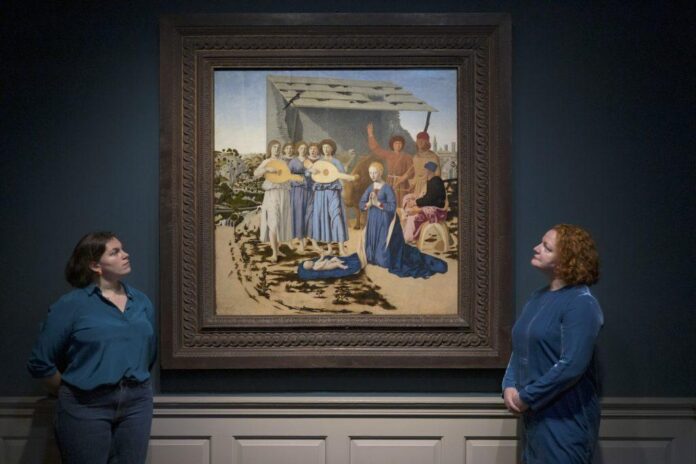 Time and overly enthusiastic cleaning had dealt enough damage to Piero Della Francesca’s masterful nativity painting, that when the National Gallery acquired it in 1874, the U.K. Parliament inquired just how original the work was.

The faces of Piero’s shepherds were erased, his colors appeared dim and dusty, and, in the ultimate Renaissance faux pas, the work was wrongly framed as an altarpiece, even though it was understood to be “a grand, domestic painting,” possibly even for the polymath’s own home.

The time, it seemed, for a touch-up was long overdue. A century-and-a-half after Prime Minister Benjamin Disraeli congratulated the National Gallery on its purchase, has returned to public viewing in London following an extensive 36-month restoration.

Presented in a “special display,” the 15th-century painting was supposed to be something of a festive gift; instead, some critics are claiming it’s a botched job, one that has ruined Christmas.

Most scathing was Jonathan Jones’s column in the Guardian. His criticisms are numerous: The shepherds look moronic, there’s a big white blob on the stable wall, every color has been changed, every line has been reemphasized, the ethereal and ghostly has been rendered dumb and gauche. The collective impact of these heavy-handed missteps, Jones writes, is to have nearly wrecked one of the world’s greatest nativity paintings.

“I don’t believe for one second this restoration is true to the original,” Jones wrote. “The [National Gallery] has shown astounding insensitivity to Piero’s magic.”

In response, the National Gallery told Artnet News that it is “a world leader in the technical study of Old Master paintings.”
It added, “Conservation work is only carried out by highly skilled and experienced conservators who have support of scientific staff.”

What do my followers make of the restoration of Piero della Francesca’s Nativity (c. 1475) by the National Gallery?

In an earlier press release, the museum said the painting had presented its conservation department with an unusually challenging job and that exploring it in-depth helped solve several mysteries about the painting. The lack of shadows is now interpreted as the work adopting the perspective of Saint Bridget of Sweden and the shepherd is thought to be pointing to a patch of divine light.

“Piero’s is a beautiful and profound meditation on the Christmas story,” said Gabriele Finaldi, Director of the National Gallery. “The recent conservation project has enabled us to see just how carefully planned every element of the picture is.”

Broadly speaking, Jones’s withering criticisms were not echoed online. “I get that restorations are fraught, but this seems a little hysterical,” Helen Barrett, a prominent art critic, wrote on Twitter. “I saw the painting this week. It’s fine.”

The Artist Thomas Demand Used a Legal Pad, a Paper Plate, and a Soda-Jerk Hat to Design a Conference Venue in Denmark. See It...