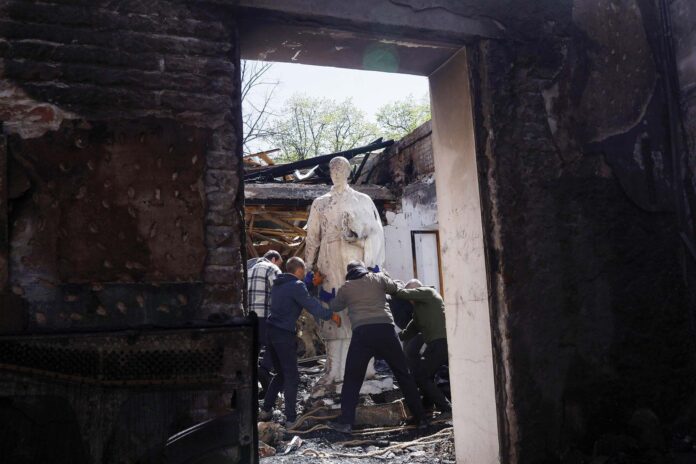 The UK’s Cultural Protection Fund has not got an allocation of money for emergency assistance for Ukraine in the current financial year, The Art Newspaper can disclose. The fund is administered by the British Council (backed by the Foreign Office), in association with the government’s culture department.

Although the fund was able to allocate £60,000 for Ukraine in March, no money has been made available in the current financial year, despite the tragic and widespread destruction of heritage buildings and museums which continues unabated.

As the British Council explains, the fund was set up in 2016 “to protect cultural heritage at risk”. So far it has allocated more than £30m, which has assisted projects in Iraq, Jordan, Kenya, Lebanon, Occupied Palestinian Territories, Sudan, Syria, Uganda and Yemen. Curators at the British Museum have played a key role in helping to evaluate applications and providing support.

In the last financial year, ending on 31 March, £2.4m had been available for grants. But by the time of Russia’s invasion of Ukraine on 24 February, there was, understandably, little money left. A British Council spokesperson told us Ukraine is also “not usually an eligible country” for Cultural Protection Fund grants, which operates “across the Middle East, North and East Africa”—but an exception was made.

In March the UK fund allocated £80,000 for Ukraine, which was channelled through the Prince Claus Fund in the Netherlands. The Dutch fund, a non-governmental organisation, is coordinating assistance for Ukraine, although its spokesperson says that “due to safety concerns, we cannot disclose specific information” on institutions inside the country that are being supported.

In March a first shipment of protection material for works of art and buildings was shipped by the Prince Claus Fund via Poland and a second consignment is now being organised. The spokesperson adds: “Unfortunately, it is too soon to start speaking about stabilisation and recovery actions because of the unpredictability of the situation, but together with our partners on the ground we are preparing for that phase as best we can.”

On 28 April the Cultural Protection Fund put out its regular newsletter with news of the Middle East and Africa, though without even a reference to the destruction in Ukraine that had been ongoing for two months. But there remains a hope that the Treasury may eventually agree on more money to help salvage Ukrainian culture. The British Council spokesperson says that “we can’t confirm what other funding might become available”.