Home News First Cosmoscow fair since Russian invasion of Ukraine to open with no... 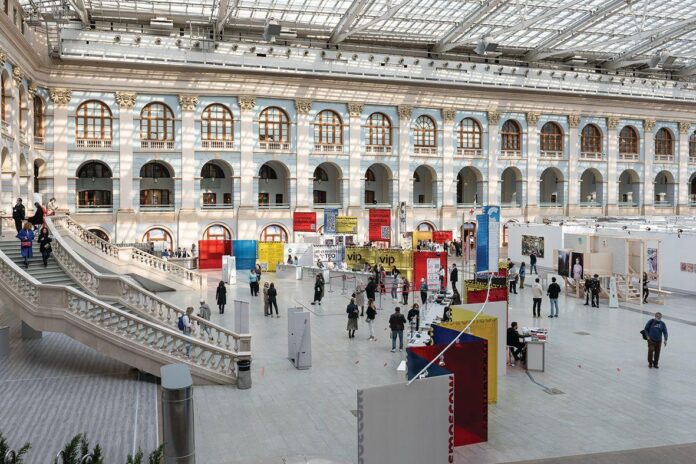 With Russia increasingly cut off from the world following its 24 February invasion of Ukraine, the country’s remaining contemporary art market, facing evident economic and often unspoken ideological pressures, is increasingly looking inward. The tenth Cosmoscow International Art Fair, which runs from 14 to 17 September, was no exception.

Even before the event began, such ideological pressures had apparently been felt by some of the participating dealers. A Telegram channel called Courier of Culture, run by a contemporary art publicist, reported that three unnamed galleries had complained about censorship by the fair, at the application stage, preventing “any political works or anything that could in any way be linked to the current state of affairs”—meaning the war—from being exhibited.

A law signed by President Vladimir Putin just days after the invasion makes it illegal to call the invasion a “war” and threatens those who spread “fakes” about the Russian military with up to 15 years in prison.

In April a criminal case was opened against the artist Oleg Kulik on charges of “rehabilitation of Nazism” for his sculptural installation Big Mother (2015), which was shown at the Art Moscow fair at the Gostiny Dvor centre, just yards from the Kremlin, which is also the venue for Cosmoscow. The work came under fire for allegedly mocking The Motherland Calls, a monument in Volgograd commemorating the Battle of Stalingrad. Kulik, who grew up in Kyiv, has said it was meant to depict the pain of his divorce.

Margarita Pushkina, Cosmoscow’s founder and director, says: “We have never allowed and do not allow internal censorship.” Meanwhile, the fair’s expert committee is “working as usual, selecting the best galleries to participate in the fair”.

The most important thing right now, Pushkina adds, is “not to multiply contradictions and conflicts”, but instead “to maintain human and professional relations, continue the dialogue and discuss ways to resolve complex issues”. The fair and galleries, she points out, “are all directly dependent on the state of the economy”.

For a long time there was a question mark over whether the fair would go ahead at all. Simon Rees, the artistic director of the fair’s previous edition, resigned immediately after the invasion. Pushkina says a successor has not been appointed because the fair’s priorities have shifted.

“One of the tasks of the artistic director of the fair has always been to develop international cultural dialogue and to attract galleries from other countries,” Pushkina says. “In the current situation, we understand that there is emotion involved for international galleries, as well as many difficulties and risks. First of all, there are logistical difficulties, so their participation does not seem simple and obvious.”

Indeed, there are no longer any direct flights to Moscow from the US, UK and elsewhere in Europe, except for Turkey and Serbia, and leading shipping companies are boycotting Russia over the invasion.

The only solution, Pushkina says, is to “now concentrate on working with Russian gallery owners in order to try to stabilise the situation and continue working on the development of the domestic art market”.

The vast majority of the more-than 65 participating galleries at Cosmoscow are Russian, compared with 82 galleries in 2021, when the fair had the “broadest geography in its history”, and on par with the 62 participants in 2020, at the height of the Covid-19 pandemic.

Ukrainian artists were always “an organic and integral part of the Russian art scene”, but “understandably” no Ukrainian galleries applied for stands this year, Pushkina says.

In recognition of the present situation, Cosmoscow is not marking its tenth anniversary with any special events, Pushkina says, though she did not directly mention the war.

“All of us in one way or another are influenced by current events and react to what is happening in our country and in the world,” she says. “In the current situation, it is impossible to remain indifferent. Everyone determines for himself which path to follow, to remain silent or to continue the activity in a modified format.”