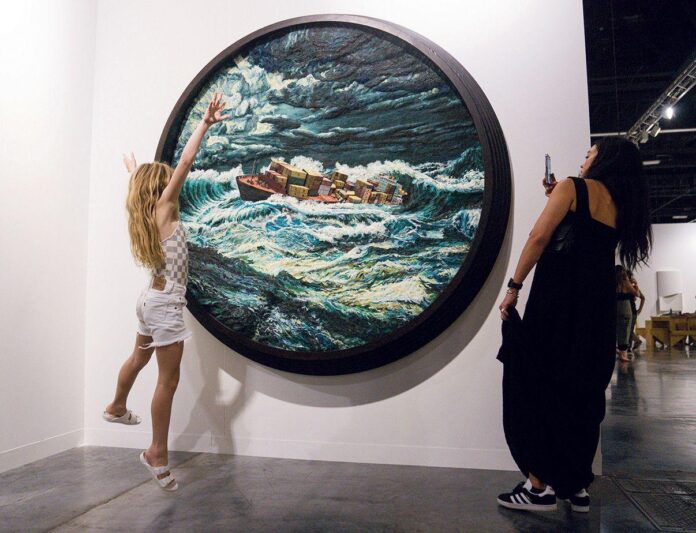 The art market is said to lag behind broader economic realities by several months—but some of those realities are already starting to be felt at Art Basel in Miami Beach this week.

“There’s a whiff of something in the air,” says one anonymous blue-chip dealer. And he is not just referring to the rain clouds that rolled in on Thursday afternoon, bringing a sudden downpour. “The market has reached something of a zenith and now everyone is buckling up for a bumpy ride.”

He notes a drop in visitors from other US cities, including New York, Chicago and Dallas, as well as a smaller cohort of Europeans and even fewer clients from Asian countries, where Covid travel restrictions have only recently been lifted. “It’s a combination of a reticence to travel and a reticence to buy,” the dealer adds.

Nonetheless, a short burst of seven-figure sales was reported by some of the bigger galleries in the first two hours of the fair’s opening on Tuesday, though much of this material is often pre-sold or all but finalised in person.

Top-line deals included an Agnes Martin painting from 1998 for $7m and a 1964 Andy Warhol Flower painting for $3.8m at Pace; a new mixed-media canvas by Mark Bradford for $2.5m and a 1979 Philip Guston in the range of $7m at Hauser & Wirth (the gallery reportedly racked up $18m in sales by noon on the opening day). Figures significantly tailed off by day two, with the vast majority of works selling for no more than six figures.

At Gagosian, meanwhile, a handful of works punctured the $1m mark, though most veered between around $300,000 and $500,000, including Anna Weyant’s Jaws (2020), which sources say found a home for just south of half a million dollars, and considerably below her auction prices.

Miami’s prices have never matched those at Art Basel’s flagship fair in Switzerland. But, in response to the more reserved figures being reported this year, one dealer says: “The majority of galleries played it safe with their material. If you see clouds forming, then you’re going to hold back some of your more valuable material for a rainy day.”

Other dealers cited the recent New York auctions—where a cool $2bn was spent at Christie’s alone—as having taken some of the wind out of Miami’s sails. The New York-based art adviser Adam Green points out that most collectors “have acquired substantial amounts of art over the pandemic-stimulated past two years”, which has “diminished the urgency to buy at this year’s Miami fairs”. He adds: “While works in great demand sold well, collectors are generally becoming increasingly selective, remaining liquid for the right opportunities.”

Sustained by high net-worth collectors, the very top of the art market is often considered immune to economic headwinds. “At our level, the market is as proofed or inured as any market could be,” says the US-based dealer Sean Kelly, who describes this edition of the fair as “very good” in terms of sales, adding, “it’s been better than expected”. Among other works, he sold five paintings by Idris Khan, including Underneath the Willow (2022), priced at £180,000; and Awol Erizku’s hanging sculpture, Nefertiti-Miles Davis (Gold) (2022), for $70,000.

Kelly admits his success “almost doesn’t make sense”, since interest rates have doubled and “there’s a lot of concern about the markets”. Nonetheless, he stresses, recession “is not being felt in [the top end of the art] market at this moment”.

With the froth coming off the top of the ultra-contemporary market, some dealers suggest secondary market sales of works by more established artists could help buoy their bottom lines in the months to come.

The New York dealer Christophe van de Weghe, who is one of the only to deal exclusively in secondary market works at Art Basel in Miami Beach, notes how supply is the perennial issue in his field. “If you have good things that are fresh to the market, then you do business,” he says.

By day three, however, Van de Weghe was still holding out for a buyer for Jean-Michel Basquiat’s The Ruffians (1982), priced at $20m. The dealer says he declined a $17m offer, but is confident of selling the work before the fair closes on Saturday.

Nonetheless, discounts are not uncommon for loyal clients, particularly in economically challenging times. As Van de Weghe puts it: “To do an art fair is expensive, so I’m not interested in asking crazy prices. I want to show things I can sell that I can make money on, while pleasing clients at the same time.”

For other in-demand artists with hundreds on their waiting lists, discounts are less common. The New York dealer Jack Shainman says he could have sold the new canvas by Lynette Yiadom-Boakye on his stand “ten times over” on the opening day. The British painter’s retrospective has just reopened at Tate Britain in London, having been cut short after two weeks in December 2020 when the UK went into lockdown, and also includes several new canvases.

Consigned just three weeks before the fair, and priced at around $3m, Shainman says the gallery is now carefully considering where to place her painting. Whoever the buyer is, a strict contract will prevent the work from being flipped at auction.

At the lower end of the market, the prospect of recession is more daunting. Sibylle Friche, a partner at the Chicago gallery Document, says she has seen “more caution from collectors who might have been a bit more impulsive in the past”.

Despite the lower price points on the stand ($2,000-$35,000), she says the gallery “is not selling in quantities like in previous years, which were a constant flow of people”. Nonetheless, more than half of the stand had sold by the end of the second day, mainly to Americans and Europeans.

Next year, Friche says the gallery plans to do fewer fairs, sticking only to the big-league events, “because, even if you don’t sell, those fairs still help with our image”.

Art Basel in Miami Beach might be the last hurrah of the year for some, but for others lower down the pecking order, it is a much-needed lifeline.

Artists created a portrait of a doctor-hero from wood