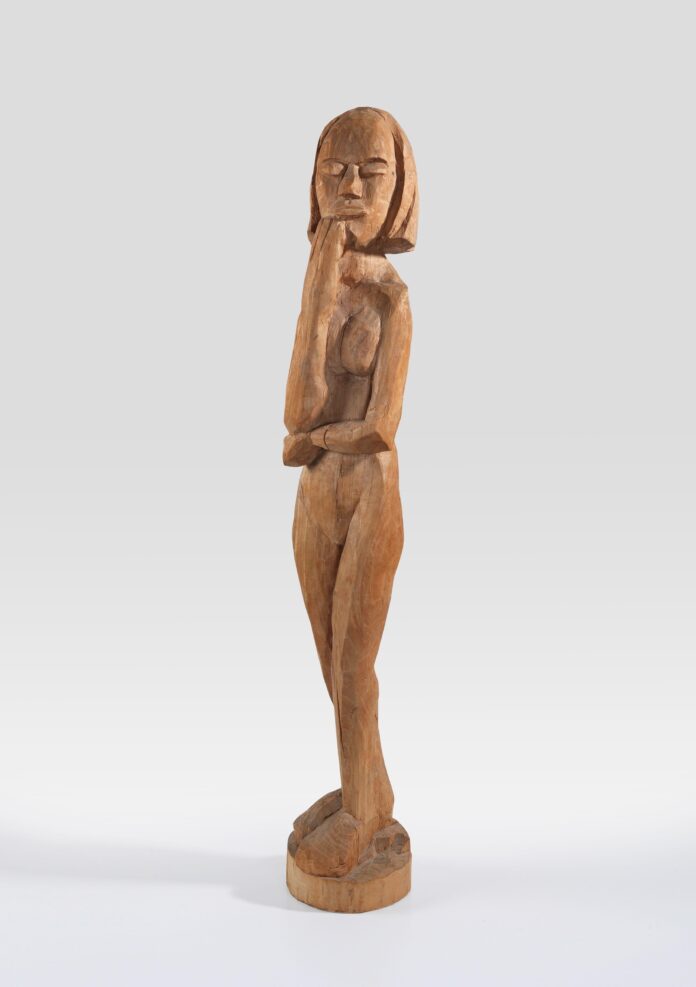 Just seven wooden sculptures by the German artist Erich Heckel, a founding member of the avant-garde Die Brücke movement, survive today. Five are held in museums or by the artist’s estate—none of them has come to the block until now. The Munich auction house Ketterer Kunst will tomorrow evening offer the 80cm-tall Stehende (standing, 1920) for €600,000 to €800,000 from the collection of 91-year-old German entrepreneur Hermann Gerlinger, whose private holdings of Die Brücke and German Expressionist work were among the most extensive in the world. His collection is being sold by Ketterer Kunst in dedicated sales across the next three years.

Quickly carved in rough and rapid movements from a poplar trunk and depicting a standing woman, the Heckel sculpture was acquired by Gerlinger directly from the artist’s estate in 2001. It is from a series of wooden sculptures made at Heckel’s home in Osterholz, near Bremen, and is the only one that survives; several of the artist’s sculptures were lost in the Second World War during a 1944 studio fire that was the result of a bombing raid.

It is being offered alongside another wooden sculpture, made by Heckel’s Die Brücke peer and close friend Ernst Ludwig Kirchner. Hockende (squatting, 1910), has an estimate of €700,000 to €900,000, and depicts a female nude crouched over a round plinth. Kirchner often painted his sculptures, to varying degrees, and in this instance he has coloured several parts of the work in black to denote hair, eyes and genitalia. It was identified via an old photograph as having been included in the 1910 Brücke exhibition at Galerie Arnold in Dresden, the first show to include sculptures by either Heckel or Kirchner.

Mario von Lüttichau, a scientific consultant at Ketterer Kunst, says that Kirchner’s sculpture was one of the ways the auction house came to determine the estimate for the Heckel sculpture (along with insurance claims from museums loaning these works).

Wooden sculptures by Kirchner have come to the block before, albeit rarely, with fewer than ten having been offered in the past 30 years. The record for a sculpture in any medium by Kirchner stands at $8m for a female figure in painted oak. Von Lüttichau says that while he expects both works to receive interest from museums, Ketterer Kunst has also received enquiries from private clients all over the world, not all of whom are “necessarily proven Expressionist collectors”.