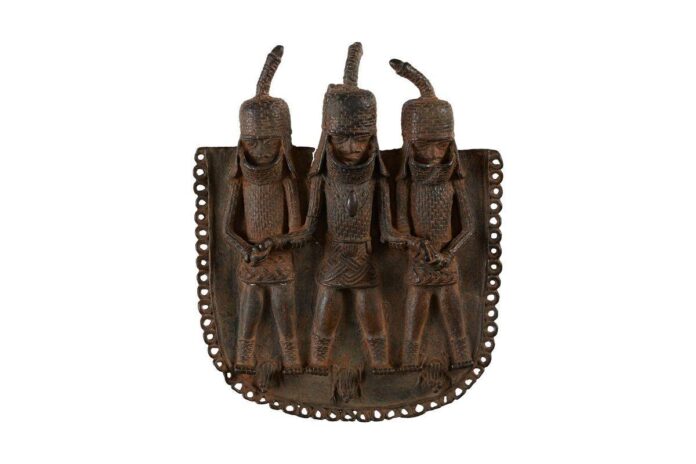 Arts Council England (ACE) has published long awaited new guidance for museums and galleries on restitution which aims to “provide advice and best practice for museums in England on responding to restitution and repatriation cases”. The new document, Restitution and Repatriation: A Practical Guide for Museums in England was developed in partnership with the educational organisation, the Institute of Art and Law.

The new guidelines, published in the wake of several high-profile restitution cases in the UK, could not be more timely after the Horniman Museum & Gardens in south London—an institution directly funded by the government via the Department for Digital, Culture, Media and Sport—announced it will transfer ownership of 72 objects in its collection, including 12 brass plaques (Benin bronzes), to Nigeria. Other objects seized by the British Army in 1897, such as a brass cockerel altar piece along with ivory and brass ceremonial objects, will also be transferred to the Nigerian government.

“The evidence is very clear that objects were acquired through force, and external consultation supported our view that it is both moral and appropriate to return their ownership to Nigeria,” says Eve Salomon, the chair of the museum trustees. The Horniman plans to discuss with Nigeria’s National Commission for Museums and Monuments the process for the formal transfer of ownership, and also the possibility of retaining some objects on loan for display, research and education. Earlier this month, the universities of Oxford and Cambridge agreed to repatriate more than 200 Benin bronze items.

The new ACE document meanwhile replaces previous guidance produced by the now-defunct Museums and Galleries Commission in 2000. “The guidance is underpinned by existing policy and legislative framework and supports museums in making decisions and managing cases in a legally appropriate and ethically responsible manner. It does not change any policy or legislation,” stresses an ACE statement.

“Museums in England will now have a go-to resource for dealing with claims for restitution and repatriation. In the past, there was often a lack of clarity about how museums should respond to claims, a situation which often made matters worse for both sides. With the new guidance, museums now have that clarity and can proceed considerately,” says Alexander Herman, the director of the Institute of Art and Law.

“While each situation is different, and a case-by-case approach is required, there are common issues which apply to all museums and for which broad, best-practice principles are recommended,” the ACE document says. It adds: “It is important to be alert to the possible sensitivities of claimants, and to the deep sense of hurt and alienation which some of them may feel. It is also worth remembering that the cost to a claimant of bringing a claim, both financially and emotionally, can often be very significant.”

Sections include “getting started” which incorporates checklists with questions such as “have you told the full story about an item through labelling and interpretation?” The second section, “working through a claim”, gives detailed information, covering ethical and legal considerations alongside best practice examples. Ethical assessments should be evaluated according to four factors such as “the significance of the object to the claimant” and “how the object was removed from its place of origin or from a past owner’.

“Implementing the outcomes” deals with the delicate issue of transferring ownership or loaning the works in question. The practical steps involved in a transfer would, for instance, include arranging or completing a permanent UK cultural object Export Licence. Another possible outcome is “rights of access or control” which involves “allowing the claimant or its representatives special access to the relevant object at the museum”. This gives rise to issues such as handling the object in ways that are “meaningful to the claimant” or controlling access to the item through digitisation and image use.

The new document, announced in 2020, was held back on several occasions due to its “increased political sensitivity”, according to Museums Journal, the publication of the UK Museums Association (MA) which welcomes the move. “[The ACE guidance] should be set in the context of the wider movement to decolonise museums and the Supporting Decolonisation in Museums guidance [issued by the MA],” the advocacy organisation says.

After 25 days, strike at the New School and Parsons School of Design ends