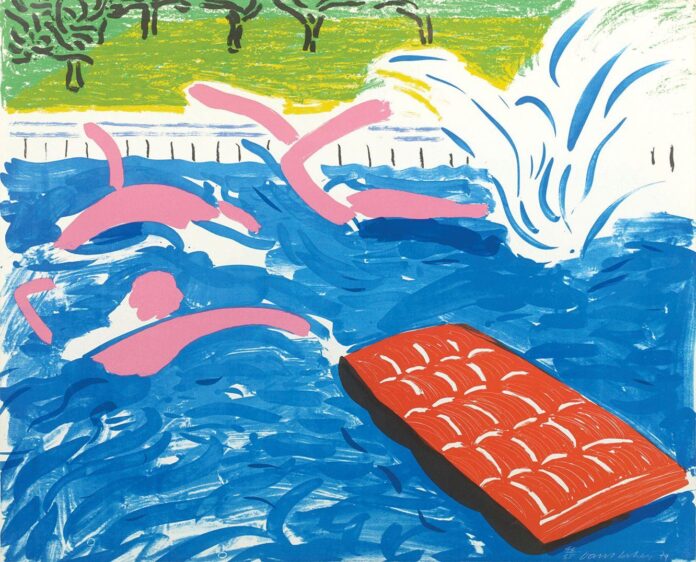 With its classic Hockney style, this lithograph is edition 25 of 55 and arrives at auction from the prominent collection of Andrew and Sandy Ovenstone, which is housed at Cape Town’s Stellenberg, a significant historic house and the last Cape Dutch property in private hands. It is being sold to fund the work of aspiring South African artists and, perhaps unusually for an auction with an overarching presale estimate of around £1.5m, sits in a sale designed to be “as inclusive as possible and to meet all price points, from a couple of thousand to a quarter of a million”, according to Robert Kennan, the auction house’s head of editions, Europe. He adds: “From his days in Bradford to Normandy today, Hockney has championed edition-making, for his own creative pursuits but also fully understanding the inherently democratic nature of prints to reach the widest possible audience. So we do have something for everyone.”

French-American artist Niki de Saint Phalle’s Nana figures are increasingly synonymous with her exploration of femininity, thanks to their bold, curvaceous, non-apologetic occupation of public spaces. This working fountain made of polyester resin will immediately spark interest in fans of the artist, who burst onto the art scene in the 1960s with her legendary Tirs (‘shootings’) paintings and is recognised for her contribution to American post-war art and role among the so-called Nouveaux Réalistes (in line with other major names such as Yves Klein, Pierre Restany and Christo). Fontaine aux Nanas (fond noir) is the first in an edition of three (plus two artist’s proofs and an hors-commerce); another is displayed at the Domaine du Muy sculpture park in Le Muy, on the Côte d’Azur, and the third is at the Tarot Gardens in Pescia Fiorentina, a sculpture garden designed by the artist to showcase some of her best monumental sculpture. The remaining versions are in private collections.

This sterling example of Bond memorabilia encapsulates a moment in popular culture. Up for sale on the 60th anniversary of the 1962 Bond film Dr No, the poster comes from an English collection, where it has been “for many years”. The lot is one of 122 items up for sale (including first-edition books, a signed gold-plated replica ‘golden gun’, and Terry O’Neil’s behind-the-scenes photographs from film sets) in a Bond-dedicated auction that is part of Sotheby’s wider ‘Luxury Week’. Fenella Theis, a Sotheby’s cataloguer, says: “This sale is the most comprehensive cross-category collection of classic James Bond material to come to auction in a generation, bringing together the books and the films in a unique celebration of the British literary and cinematic icon.”

The model in this Pre-Raphaelite painting is believed to be the stepdaughter of the artist, Marie Spartali Stillman. The work made such an impression on Dante Gabriel Rossetti that he is said to have asked the artist to sit for his own version of it. Described by the art historian Pamela Gerrish Nunn as the artist’s “masterpiece”, it was inspired by a Boccaccio sonnet. “Stillman, along with many other female artists of the period, has been reconsidered and her true value and importance more fully appreciated,” says Charles O’Brien, the head of 19th-century paintings at Bonhams.

These nine panels intricately inlaid with hardstones were created for the Florentine Grand Ducal Workshops at the peak of their reputation. With each panel depicting two or more animals, the pieces are acknowledged as bearing similarities to the work of Baccio del Bianco, a 17th-century Italian architect, engineer and painter who was known for his dynamic depiction of animals. These decorative examples come from the estate of Jack Baer, an established art dealer specialising in Old Masters and chairman of the Society of London Art Dealers, in addition to his work with the government’s acceptance in lieu of tax panel. They are part of a wider collection of items from his home that are being sold.