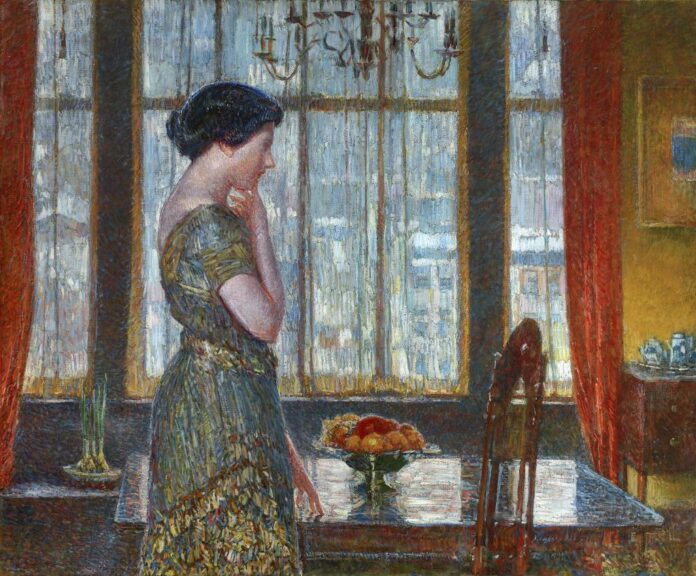 What You Need to Know: Impressionist Childe Hassam is one of the most influential American artists of the early 20th century—so much so that the artist’s flag-filled (1917) is now hanging in the Oval Office. Currently, New Orlean’s M.S. Rau, an esteemed fine art, antiques, and jewelry gallery, is offering two works by Hassam: New York Winter Window (1919) and The Golf Links (1926). The two works—the first a jewel-toned interior, the second a sun-bathed golf green—exemplify the artist’s wondrous sensitivity to color and his deep ties to the New York art world over an important decade in his career. 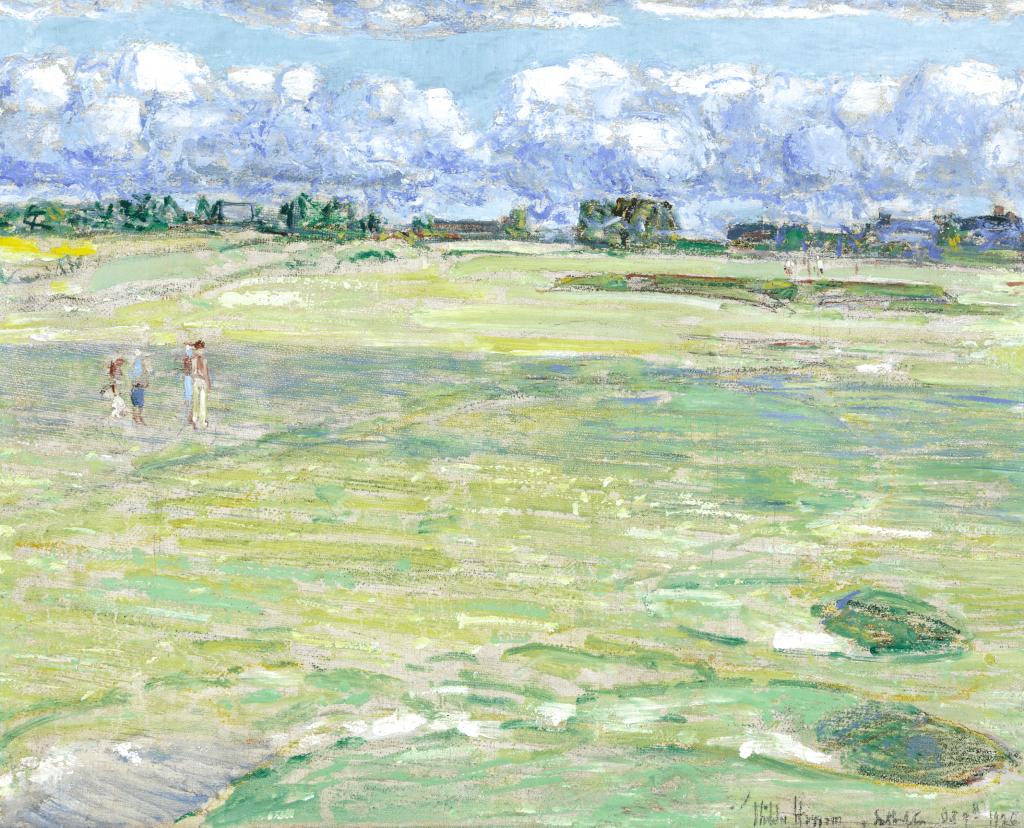 Why We Like It: New York Winter Window is among Hassam’s most significant painterly accomplishments. The painting comes from the artist’s “window series,” which Hassam began in 1910. The intimate, glittering painting captures an elegant, well-dressed woman in profile standing within a well-appointed interior and positioned before a window. The painting is suffused with rich autumnal colors and subtle, brumal light. The scene is set in the dining room of Hassam’s studio and residence at 130 West 57th Street in Manhattan. The woman is none other than Hassam’s beloved wife and favorite model, Maude. The tender image is regarded as a masterpiece of Impressionism.

Offering a stark contrast to the wintry ambiance of New York Winter Window, The Golf Links is a brilliantly lit ode to summer leisure. Made in the middle of the following decade, the painting depicts the calm tranquility of a golf course. The painting comes complete with its original frame, designed by Hassam himself. The work is representative of the artist’s enduring attachment to East Hampton, where he spent most of the summers in the last two decades of his life. It was during such a visit that he completed this work. Here, the artist captures the nuances of the sun-dappled lawn with an array of hues—greens, blues, yellows, and purples all form the expanse. The two works represent the artist’s enduring sensitivity to light and color, from two distinct, though important moments in his career.

According to the Experts: “A pioneer of American Impressionism, Hassam’s distinctly American subjects are both nostalgic and vibrant, and today are considered among the best of turn-of-the-century American art. Born in Dorchester, Massachusetts, Hassam began his artistic career as a freelance illustrator, working for national publications such as , , and the . His first solo exhibition of watercolors took place in Boston in 1883, and he quickly catapulted onto the international scene, winning a bronze medal at the Exposition Universelle in Paris in 1889. Upon his return from Paris, his work took on the distinctly impressionistic style for which he is today so beloved. A true master, Hassam depicted a way of life characteristic of both American and French society, and his work elucidates an important chapter in American history. Today, his work resides in numerous important museums, including the Metropolitan Museum of Art in New York, the National Gallery of Art in Washington, D.C., and the Museum of Fine Arts, Boston, among others.”

The U.K. Is on Its Third Prime Minister in Seven Weeks. Here’s What the Art Market Believes Rishi Sunak Needs to Prioritize