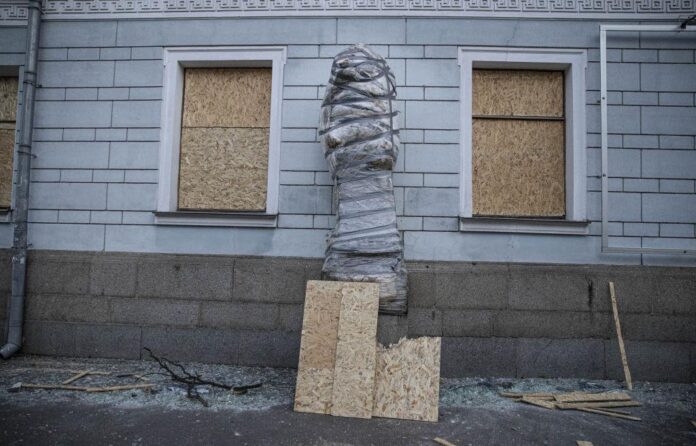 As a series of missile attacks on Monday, October 10, rained down on at least 10 Ukrainian cities, Ukraine’s culture minister, Oleksandr Tkachenko, wrote on Twitter that the Russian strikes have damaged several cultural institutions in Kyiv.

The Taras Shevchenko Museum, a museum dedicated to the late 19th century Ukrainian poet, was damaged, alongside the Khanenko art museum and the building that houses the country’s philharmonic orchestra, according to the culture minister. Ukraine’s deputy head of the president’s office, Kyrylo Tymoshenko, also claimed in a Telegram post that the Khanenko Museum in the center of Kyiv had been targeted in the early morning attacks.

The Khanenko Museum, whose official name is The Bohdan and Varvara Khanenko National Museum of Arts, is home to one of the largest collections of European, Asian and Ancient art in the country. The collection itself has been secured since the invasion began on February 24. On Tuesday morning, the museum confirmed on social meida that some of its windows have been blown out and were being repaired, and that further damages are still being assessed.

The Taras Shevchenko Museum also posted on its social media on Tuesday morning, confim damage to its building, including windows of the first and second floors. The institution is also still assessing the damage which it said “is quite significant.”

Ukrainians are waiting in bomb shelters and underground train stations as air raid sirens blare for a second day on Tuesday, October 11. At least eight people have reportedly been killed and 36 injured in widespread strikes from Russia that have largely targeted civilian areas, according the country’s state emergency service said.

It’s not the first time Russian attacks have hit Ukrainian cultural institutions. In February, a museum in Ivankiv dedicated to the beloved folk artist Maria Prymachenko was partially burned down and destroyed, resulting in a loss of 25 paintings by the artist. At the time, the Ukrainian ministry of foreign affairs decried the attacks, referring to her works as “world-famous masterpieces,” which led to Ukraine’s culture minister to ask UNESCO to revoke Russia’s membership.

As of September, UNESCO has verified damage to 196 sites since the invasion began February 24. By its count, 82 religious sites, 13 museums, 37 historic buildings, 36 buildings dedicated to cultural activities, 18 monuments, and 10 libraries have been affected. In its last update in September, the Ukrainian Culture and Information Policy Ministry had reported more than 500 cases of either destruction or damage at Ukrainian cultural heritage sites.

Attacks on the country’s cultural heritage have also led to increased looting. Peter Doroshenko, the newly appointed director of New York’s Ukrainian Museum, who recently launched an assistance program called SAFE, told Artnet News that a number of “artifacts have somehow appeared on the black market or in museums in Moscow,” but with the deteriorating security situation, it is difficult to evaluate much less known precisely how much of the country’s heritage has been destroyed or looted.

Odesa, which was subject to air raid sirens Tuesday morning, according to the , has officially applied with UNESCO for World Heritage Status.