Home News Graffiti Art Gets a Permanent Home in L.A. With the Opening of... 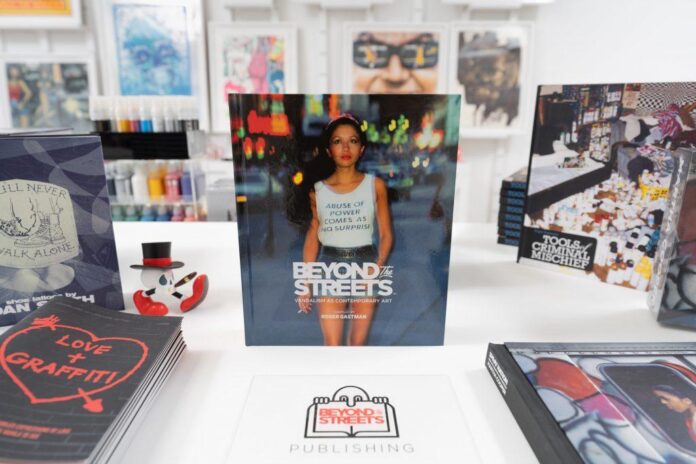 Roger Gastman, the noted graffiti historian and street art collector, is opening a permanent Los Angeles home for Beyond the Streets, his popular series of museum-scale exhibitions celebrating street artists both past and present.

The gallery will offer a mix of museum-style shows with loans from private collections, as well as exhibitions with new works for sale—something that was never officially part of previous “Beyond the Streets” shows.

“It’s never been publicly for sale, but we do place a lot of art in collections,” Gastman said. 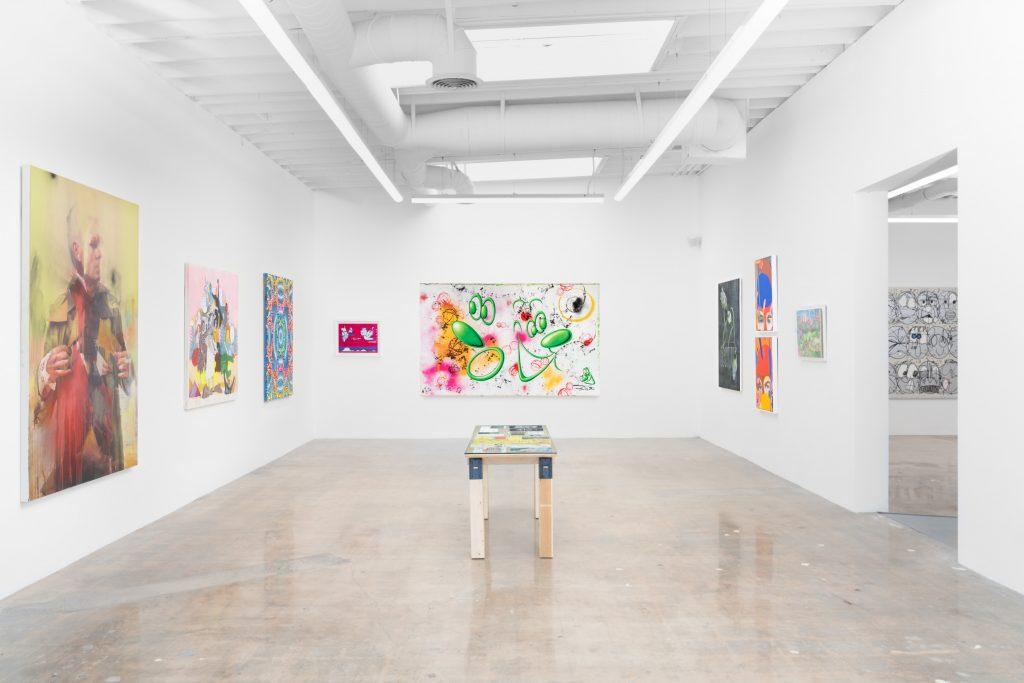 The roots of the project go back to 2011, when Gastmas curated the hit exhibition “Art in the Streets” at the Museum of Contemporary Art Los Angeles. In 2018, he took over a 40,000-square-foot Los Angeles warehouse to stage the first “Beyond the Streets” show.

A New York edition followed in 2019, and London and Shanghai versions, delayed by the pandemic, are both currently in the pipeline. (There was also a virtual Beyond the Streets art fair in late 2020.)

But for Gastman, a smaller, more nimble space that would operate on an on-going basis always stuck in the back of his mind.

“When we do these massive Beyond the Street shows, they’re incredible and we love them, but we’re focusing on 100-plus artists at a time. It’s hard to give all of the artists the attention we want to give them,” he said. “Here we can focus on one theme or on individual artists for six to eight weeks, and then we can do it again a few weeks later—and it’s free for visitors.” 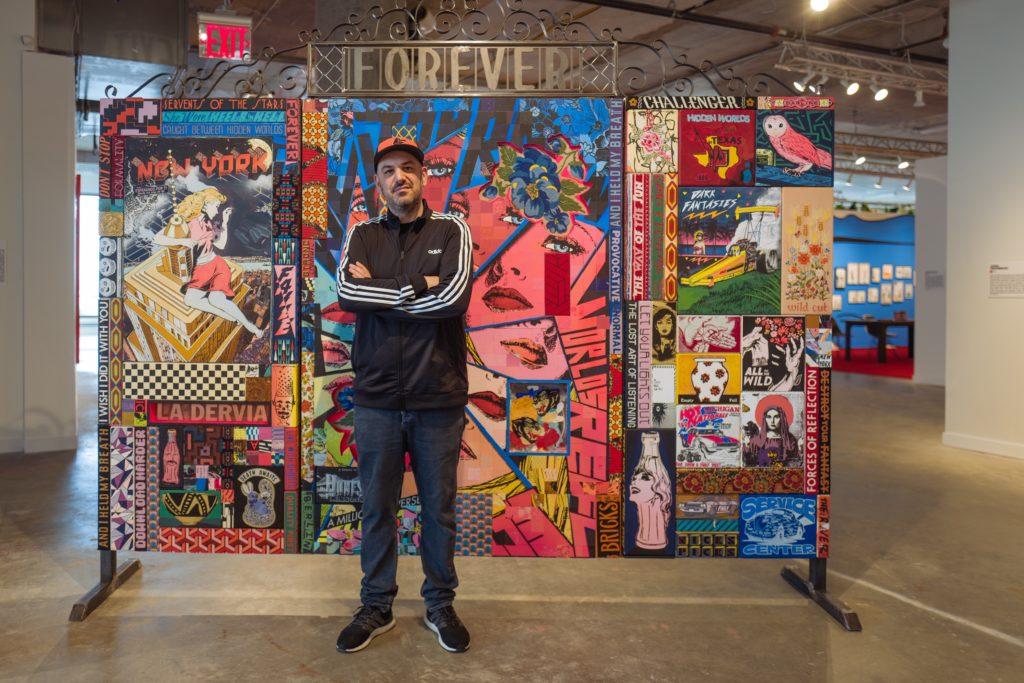 When he decided it was finally time to move forward with the idea, Gastman scoured the city’s rental properties before falling in love with a 6,000-square-foot building on La Brea Avenue. It boats tall ceilings, skylights, and—crucially—its own parking lot.

“It just seemed so perfect. Within a week we had signed a lease,” Gastman said. “This is an area that I love, that’s so central and convenient for everything—and there are so many galleries on this block.”

The space will launch on September 24 with “Post Graffiti,” an exhibition tracking the evolution of graffiti, from the scene’s living legends such as CRASH, Eric HAZE, and Lady Pink, to younger artists such as POSE, Othelo Gervacio, and Nehemiah Cisneros. 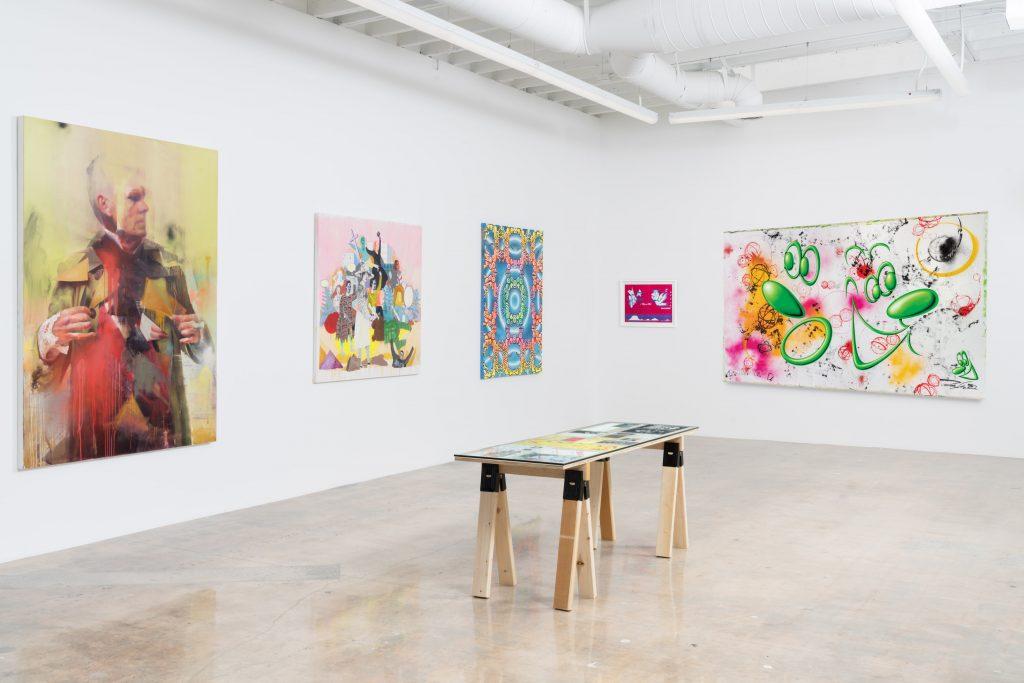 “Often with street art,” he added, “it’s just instantly much more acceptable to the general public. It’s prepared ahead of time in the artist’s studio, with imagery that is often more identifiable, versus a name that’s written very stylistically.”

The show’s title comes from the early 1980s, when graffiti artists, who had gotten their start painting illegally on walls and subway cars, first began migrating into the galleries.

“I wanted to do a show sort of as homage to that, bringing in a few of the incredible early New York city artists who were part of that scene,” Gastman said.

Of course, translating such work from the urban environment to the white cube is never without its difficulties.

“There’s absolutely the complete purists who don’t ever want to see graffiti or street art in a gallery,” Gastman admitted. “You can paint graffiti on a canvas, or take a photo of it, but often that energy is lost. You can have someone come and spray paint your whole gallery, and it can look great, but it’s never gonna feel the same as it does on the street.” 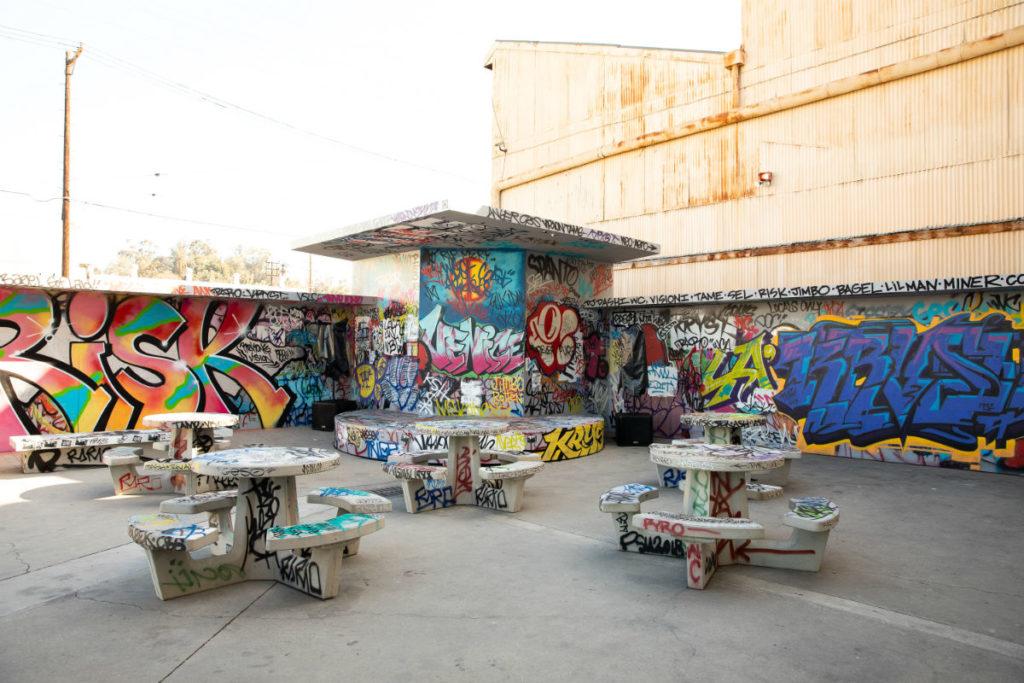 Recreation of Venice Beach’s Pavilion. Installation view in “Beyond the Streets” in 2018. Photo courtesy Beau Roulette.

At the same time, however, there are art collectors with deep pockets who abhor graffiti on the streets, but who spend large sums on artists who got their start in the medium. Gastman feels he has a responsibility to educate them about the origins of that work, and its connections to a world illicit art that continues to this day, even as street art continues to make inroads to the blue chip art market.

“There’s people who still travel the world painting clean subway trains—and you’ll probably never see their work because a lot of times the trains don’t even run,” Gastman said. “Those people are risking their lives to do that, because that’s what they want to do.”

Among the show’s highlights will be the first-ever collaborative work by longtime friends FUTURA2000 and Kenny Scharf. Their large-format painting will be displayed along a poster from their 1983 two-man show at New York’s Tony Shafrazi Gallery. Prices for works on view will range from $1,400 for photographs to close to $300,000 for the most expensive paintings.

For street art fans with lower budgets, the new gallery will also include a fully stocked gift shop, which was always an in-demand aspect of previous exhibitions. 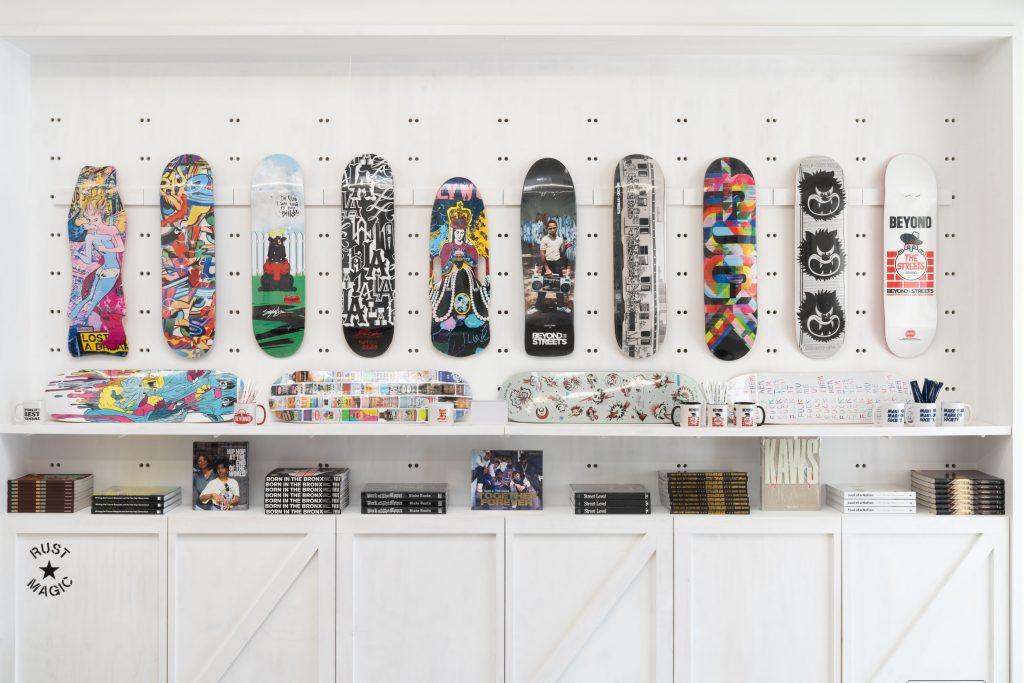 “It’s full of custom items that we created, plus a lot of great items directly from artists that are hard to get, and just an incredible selection of books,” Gastman said.

There will also be two separate exhibition spaces, Beyond the Streets and a new concept called Control Gallery, which Gastman will run with creative agency and artist representation firm Icnclst and its CEO, Sky Gellatly.

“There’s so many artists who we love that don’t come from graffiti and street art who we would love to work with, but Beyond the Streets doesn’t make much sense as a platform for them,” Gastman said.

There will be separate entrances for the two outfits, but the interior spaces are contiguous, giving the gallery the opportunity to stage exhibitions across both spaces, like the inaugural show. And there will be a joint quarterly print newspaper, , dedicated to art and music content. 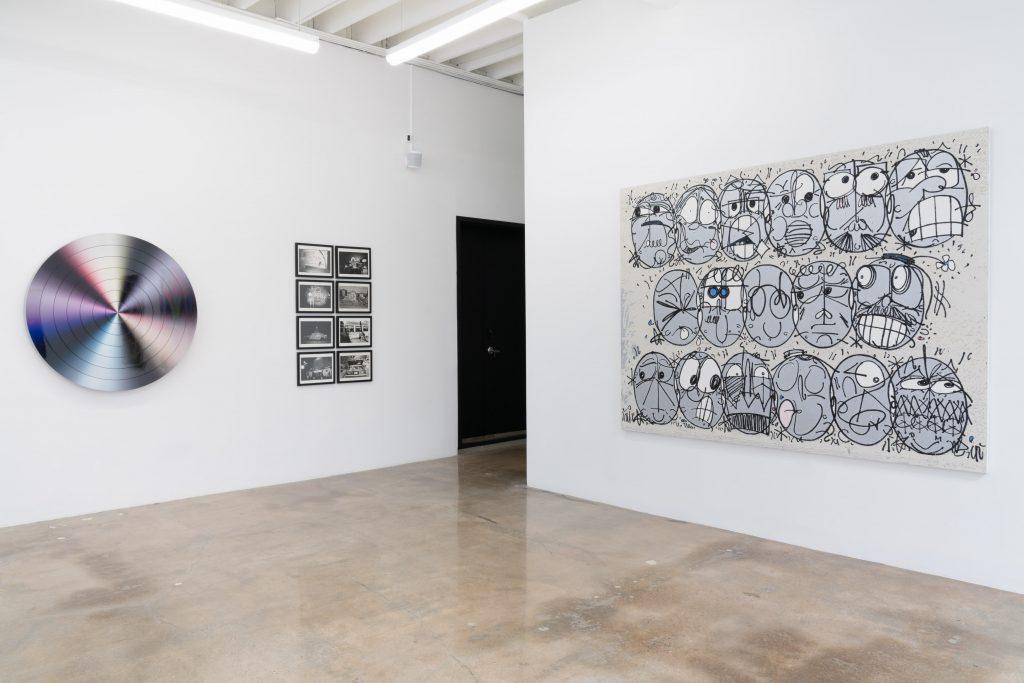 Dante Parel and Aurora Fisher-Kendrick will be Control’s directors, and Ozzie Jaurez, a young street artist who is featured in the opening show, has been brought on as a curator to help bring in emerging talent.

“It’s important to me to weave in the stories of the younger artists in what we’re doing,” Gastman said, admitting that “it’s so hard” to do that while also continuing to foster his longstanding relationship with giants of the scene.

“I don’t want to say I’m the grumpy old man who only cares about historical things, but I want to continue to dig up the stories of the culture of graffiti and street art before they disappear,” he added. “The artists are getting older. A lot of them are dying. Collections are getting ruined in basement with floods and stuff like that. It’s just so important for me to keep preserving the historical stories.”

Art Industry News: Hamline Professors Call for the University’s President to Resign Amid Furor Over Prophet Muhammad Art + Other Stories

‘I never run out of ideas’: an interview with Yayoi Kusama and highlights from her new catalogue