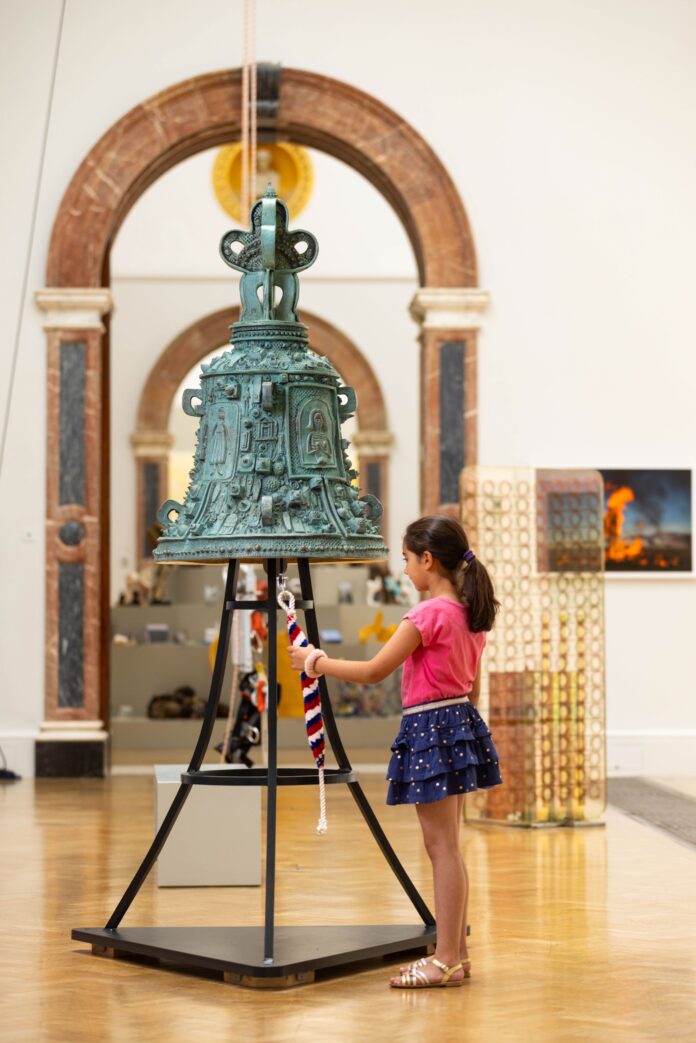 The Turner prize-winning artist Grayson Perry will unveil a bronze bell at this year’s Summer Exhibition at the Royal Academy of Arts in London (21 June-21 August), which visitors will be invited to ring.

Perry says in a statement: “This bell I conceived as a memorial to the dead of the pandemic, it is covered in what looks like an aerial view of a multicultural cemetery. It also features a doctor and a patient. It could also be rung as a celebration that we have survived.” The Covid Bell was fabricated by the digital heritage preservation company Factum Foundation and cast by Pangolin Foundry in Gloucestershire.

A Factum Foundation representative says that “Grayson Perry made the bell to help shed light on the dying art of bell casting in the UK and in particular to support the campaign to reinstate the Whitechapel Bell Foundry which closed in 2017.”

Last May, after years of wrangling and debate, the UK government approved a controversial plan to turn the centuries-old Whitechapel Bell foundry in east London into a boutique hotel development. Established in 1570, the foundry was famous for casting celebrated bells including Big Ben and the Liberty Bell in Philadelphia.

The site was sold to the US investment group Raycliff, founded by the New York-based entrepreneur Bippy Siegal, which plans to preserve the Grade II listed building at the front of the site and demolish a 1980s extension at the rear, making way for a boutique 103-room hotel, café and studios for creative businesses. A rooftop pool also featured in the designs submitted by the London-based 31/44 Architects. Crucially, the plan was backed by the heritage body, Historic England.

There was an alternative though. The Factum Foundation teamed up with the conservation group Re-Form Heritage to turn the site back into a working foundry. Both organisations wanted to acquire the foundry and buildings and form a charitable trust to then hold it in perpetuity as a working foundry. Factum Foundation says in a statement that “the [former foundry] site on Whitechapel Road remains empty and looks increasingly run down”.

Factum Foundation has since co-founded the London Bell Foundry, a new company dedicated to preserving ancient bell-making traditions. Adam Lowe, the founder of Factum Arte, says that Perry has made four editions of the Covid Bell; proceeds from the sale of one of the bells will go towards the London Bell Foundry.

Lowe adds that the artists Conrad Shawcross and Paula Crown have also been commissioned to create bells as part of the foundry project while a film about traditional bell casting has been commissioned with Nigel Taylor, the former Tower Bell manager at the Whitechapel Bell Foundry. Perry will also create smaller versions of his Covid Bell which will be available via Victoria Miro gallery. “It will be an incredibly cathartic experience to ring the bell in a public space [at the Royal Academy],” Lowe adds.

Art Industry News: Auction Houses Insist that the Art Market Is Still On Fire. Are They Telling the Whole Truth? + Other Stories