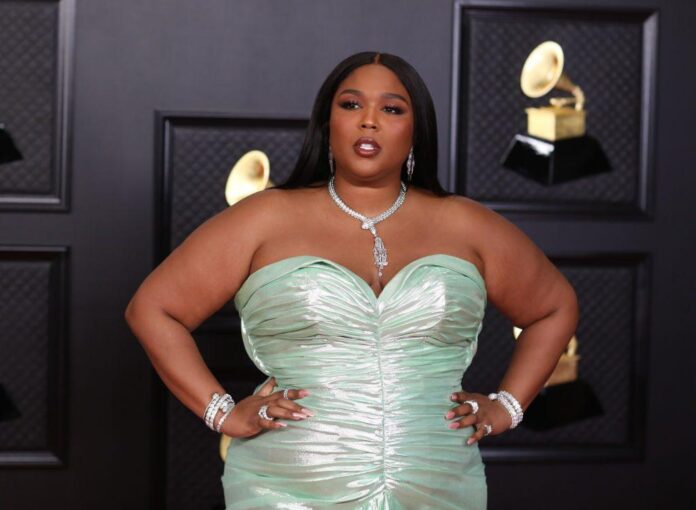 Four studio albums in, Lizzo’s undiluted songs about the Black female experience are at turns poignant and thought-provoking, danceable and irreverent, but they’re always relatable. With lyrics about desperate DMs, break-ups, and female camaraderie, relatability has been as integral to Lizzo’s chart-stomping success as twerking and feel-good bangers.

Fitting, then, that Lizzo’s December 17 performance on of “Break Up Twice” paid homage to Annie Lee, another Black artist who focused on painting everyday experiences for 40 years.

As the camera cut to the Grammy-winning singer, (ca. 1985), the artist’s solitary self-portrait that became a cultural symbol at the turn of the century, was immaculately recreated. The wall was cast in the same shades of nightmare blue, a lamp and clock lingered feebly to the side, and Lizzo, dressed in a matching white slip, embodied Lee’s own posture, one that was tired but resolute.

Lee may have been capturing the relentless toil of her decade spent working in Chicago as a railroad clerk and Lizzo singing of break-up fatigue, but the reference worked. It was an earnest gesture of solidarity to those whose labor too often goes unseen and unheralded.

Needless to say, it was extremely well-received. “Lizzo is unapologetically about her place in the cultural zeitgeist,” read a post that went viral on Twitter. “This hung in every black household at the turn of the 21st-century.”

The artist’s grandson, Abe Ilo, who holds the rights to his grandmother’s work, was likewise thrilled by Lizzo’s tribute. “For her to use her time in the spotlight on to honor my grandmother,” he told the Chicago Sun-Times, “was definitely awe-inspiring.”

Though better known for referencing astrology, Lauryn Hill, and her hometown Minnesota Vikings, Lizzo has upped her art bona fides here—and in under a week, if her post-show Instagram post is to be believed. To do so, she pulled together a team that included Los Angeles wardrobe stylist Brett Alan Nelson, star producer Quintin Gulledge, and choreographer Tanisha Scott whose work with Rihanna and Beyoncé has been celebrated for bringing Jamaican dancehall into Billboard hits.

Unlike Lizzo, whose fresh take on hip-hop and body positivity garnered the singer acclaim in her early 20s, Lee didn’t commit to a life as an artist until her late-40s. Once she did, however, her quiet paintings of African-American family were widely celebrated. Her debut gallery show in 1985 sold out within hours and her work went on to be featured in Bill Cosby’s and Eddie Murphy’s . Prints of  continue to sell.

“My paintings are of everyday life,” Lee once said in interview. “I try to paint things that people can identify with.” Swap out painting for singing and it could be Lizzo herself speaking them.

A U.K. Couple Found a Literal Hoard of Rare Gold Coins Buried Under Their Kitchen Floor During Home Renovations