Home Art market 10 of The World’s Most Expensive Watches 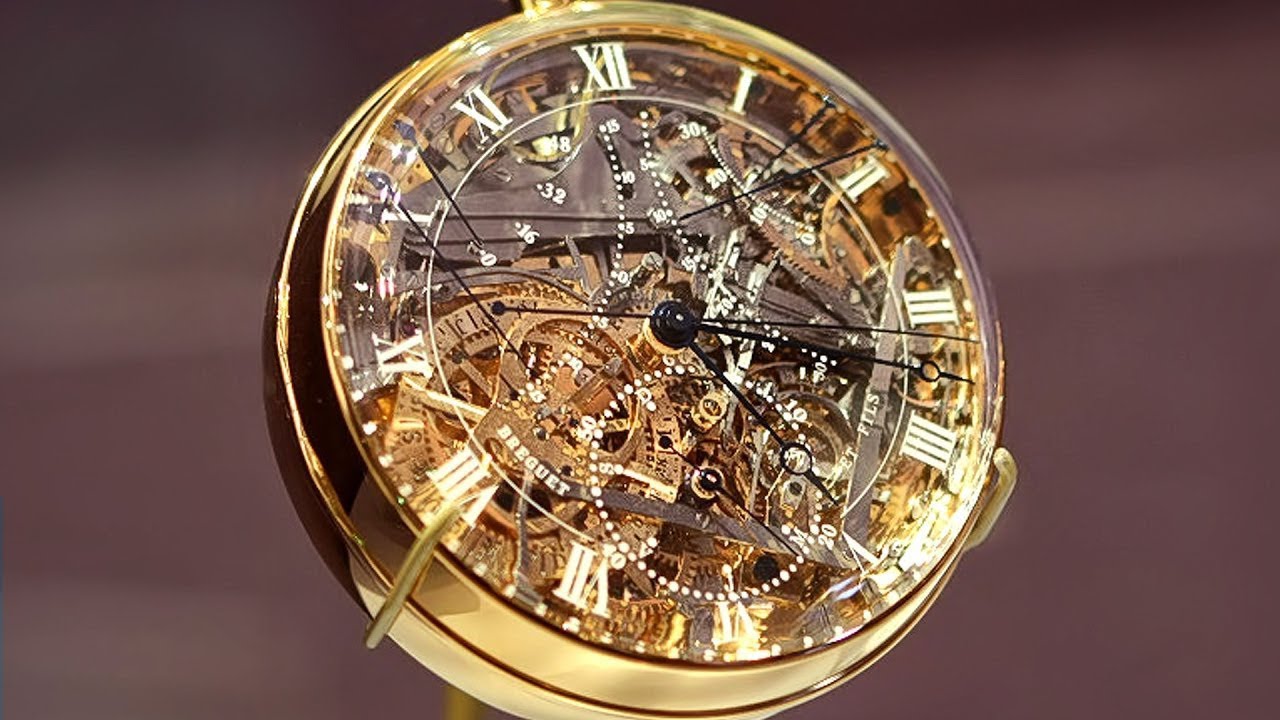 All models from this list were created in a single copy and exactly half of them at one time became real sensations of the largest watch auctions. 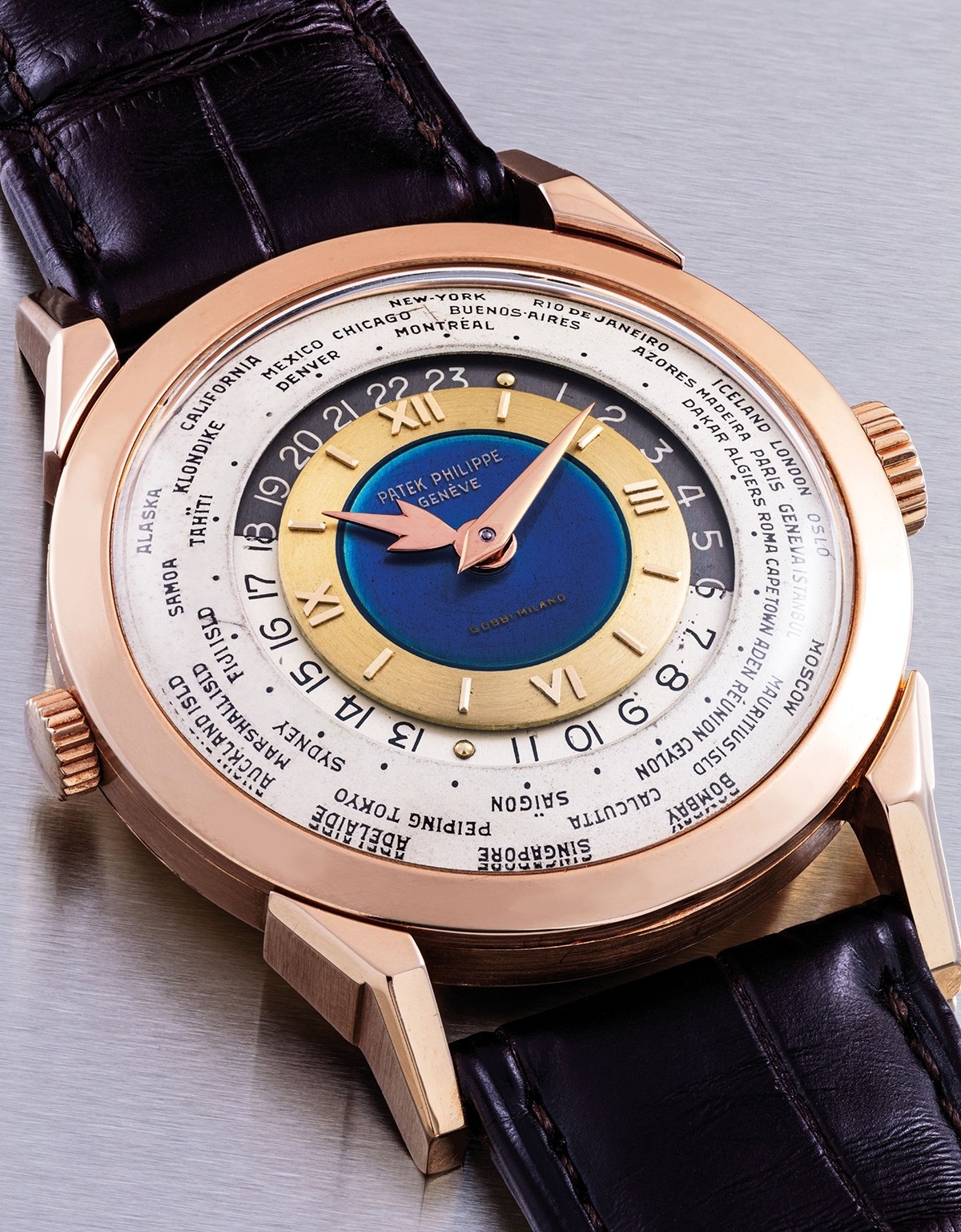 In November 2019, at Christie’s Hong Kong auction, the most expensive watch in Asia was sold. It is well-known among collectors vold timer Patek Philippe ref. 2523, to be exact, its extremely rare version. The watch, created in 1953, has a pink gold case. Instead of the more traditional world map for this model, the dial in the center is finished in blue enamel. Another nuance that indicates the uniqueness of the watch is the signature of Gobbi Milano on the dial. This is a direct indication that the watch was once sold through the Milan-based retailer Patek Philippe. The total price of the model at auction was $8,967,380. 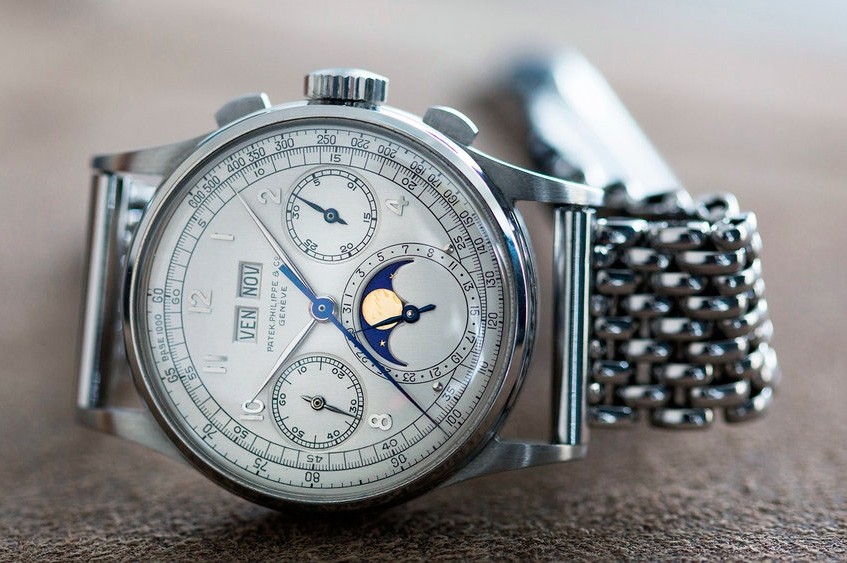 In November 2016, at the regular session of the auction house, Phillips has exhibited a steel chronograph Patek Philippe ref.1518, which went off the hammer for € 10,250,000. This model was once the first watch with chronograph and perpetual calendar functions to be mass-produced by Patek Philippe. It was produced between 1941 and 1955 when a material as common today as steel was not very popular: in 14 years of production, only 4 versions of the model in steel were launched. Moreover, according to the engraving on the case back, the model from the November 1943 Phillips trades was the first watch in these four. Interest in the rarity of Patek Philippe was also fuelled by the fact that the watch was auctioned for the first time in 10 years. 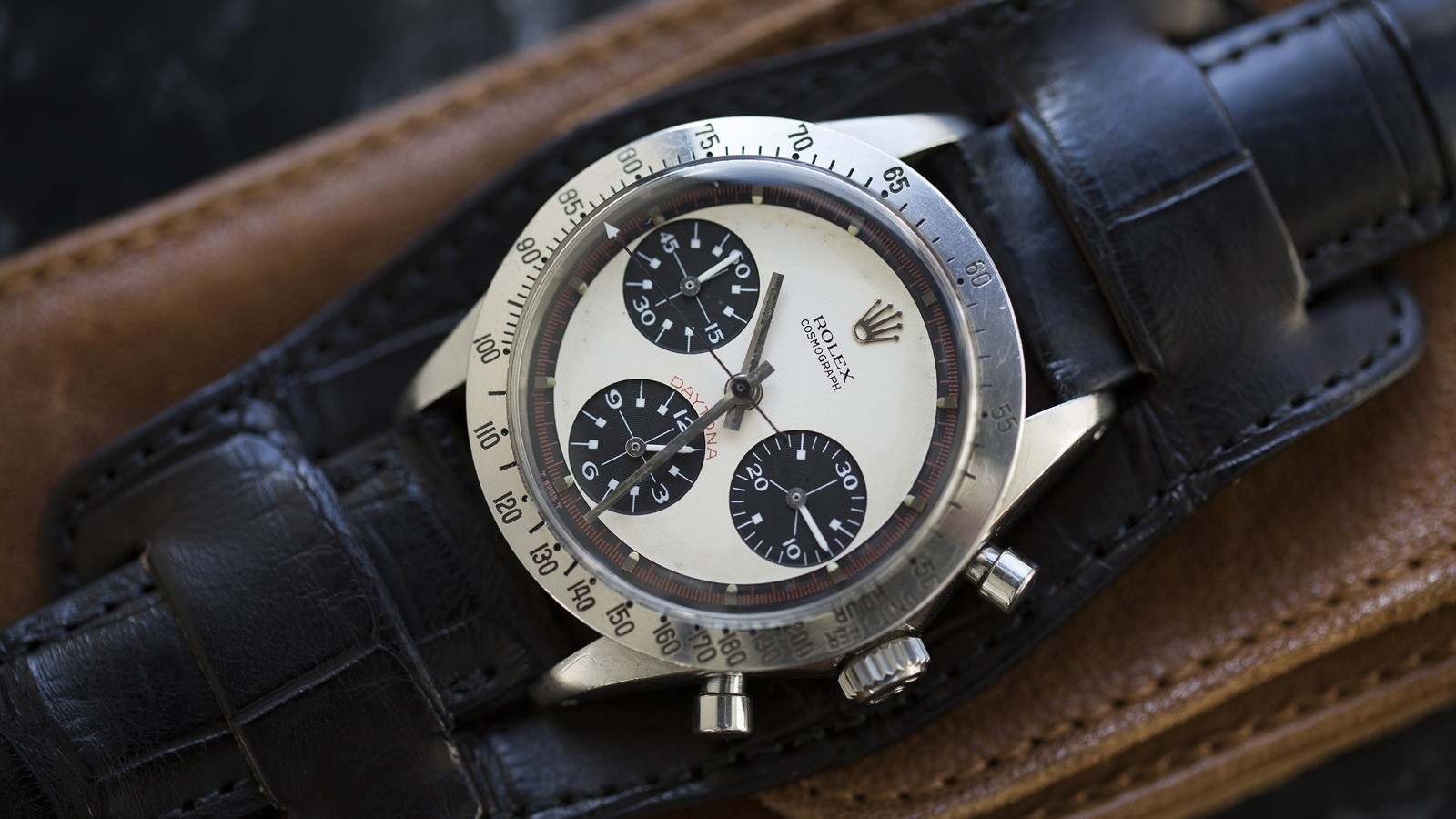 The first hourly auction of the auction house Phillips in New York (October 2017) did not do without a sensation. Up for sale a Rolex Cosmograph Daytona “Paul Newman” ref. The 6239 left the hammer for a record of $17,752,000, the most expensive wristwatch ever auctioned. Behind the high price of the model is a painfully simple secret: this watch once belonged to Hollywood actor Paul Newman, whose name became the second name of all Cosmograph Daytona chronographs with a similar style. In 1969, the watch was given to the actor by his wife Joan Woodward. Knowing her husband’s unbridled passion for high speed, she ordered a personal engraving on the case back of “DRIVE CAREFULLY ME”. To date, this watch tops the list of the most expensive Rolex models. 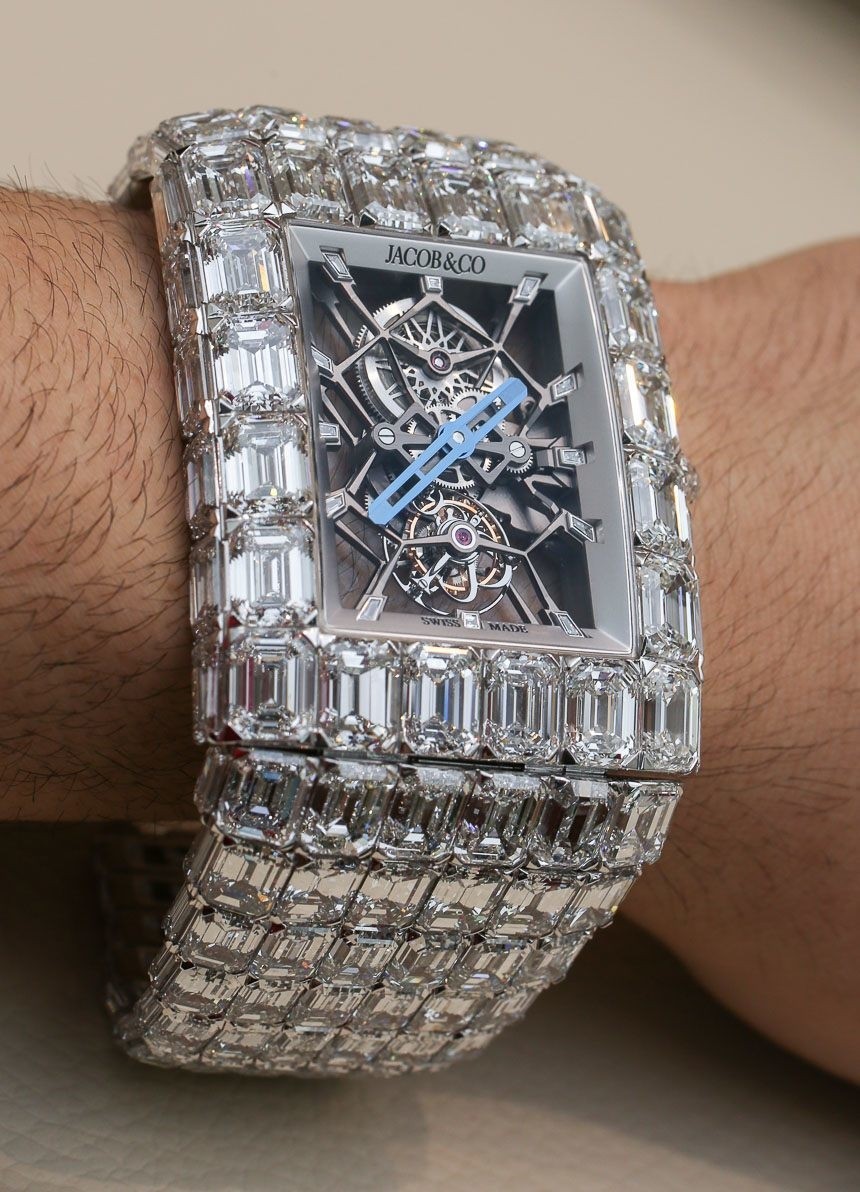 The eye-catching skeleton called Billionnaire was unveiled to the public at the 2015 Baselworld Jewellery and Watch Show. The open tourbillon movement in this model is framed by a white gold case and bracelet set with 260 emerald-cut diamonds. The design of this watch was developed by Jacob & Co in collaboration with Italian businessman Flavio Briatore. The declared value of the model is $18,800,000. 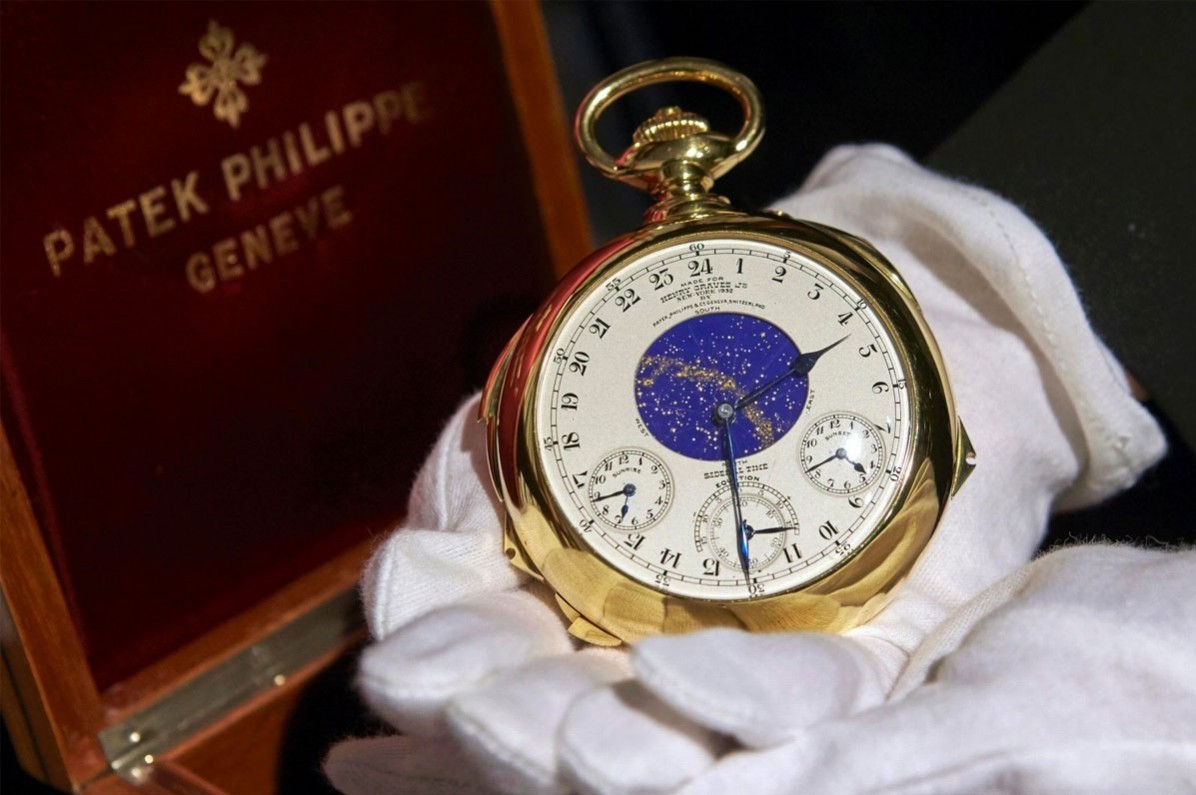 Since its creation in 1933, this model has held the title of the most complicated watch in history for 56 years. Its first owner was the New York banker Henry Graves, one of Patek Philippe’s regular customers, who set out to get the most complicated watches in his collection. Among the 24 complications that Patek Philippe’s masterpieces equipped with this pocket masterpiece are a perpetual calendar, moon phase indicator, sidereal time, minute repeater, and a completely unique feature – display of time of sunrise and sunset over New York, to be more precise over Manhattan. On November 11, 2014, the watch was sold at Sotheby’s auction for $24.3 million. Curious fact: the Supercomplication Henry Graves model twice became the absolute record-breaker in watch trading. In 1999, an elegant pocket watch in a yellow gold case was sold for $ 11,000,000. 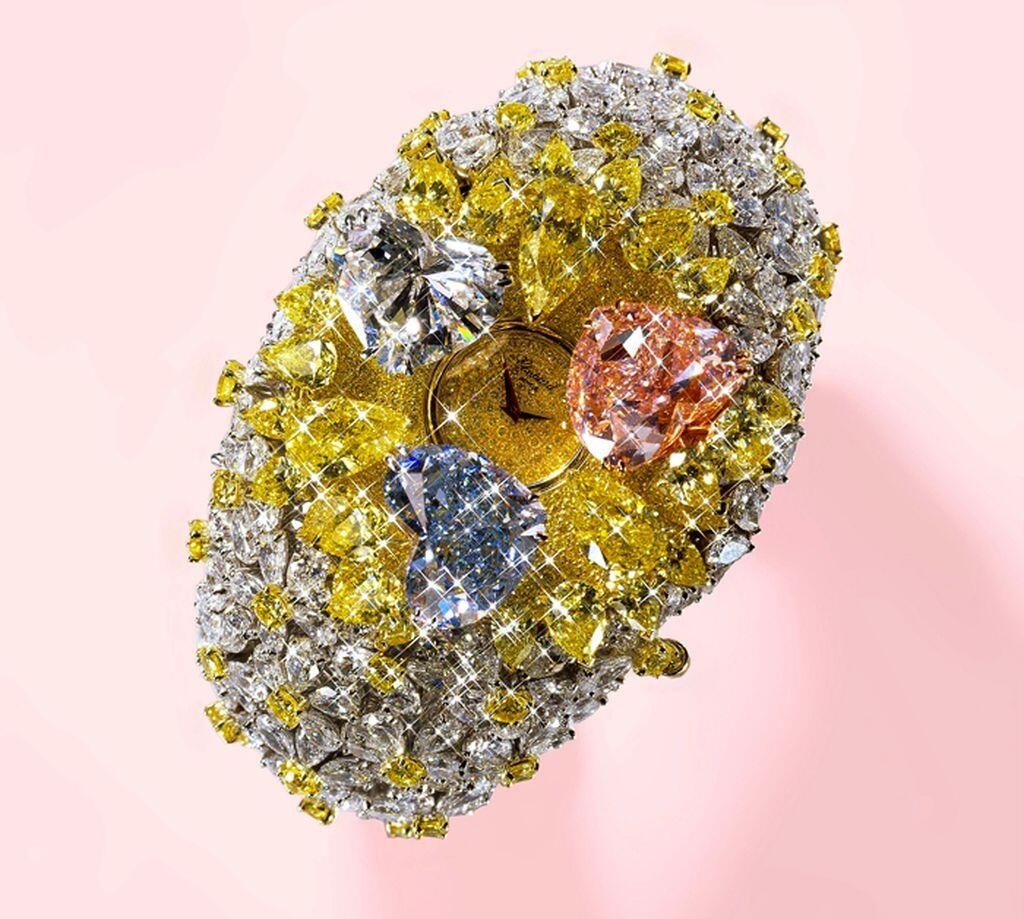 Created in a single piece, Chopard 201 Carat is set with 874 diamonds in white, yellow and pink. The model’s dial is framed by 3 large, irregularly shaped diamonds weighing a total of 38 carats. According to the design concept, the diamonds on the watch are set in the form of flowers in which white stones are petals and yellow diamonds symbolize the core and stems of flowers. The cost of this flower and jewelry symphony is $25,000,000. 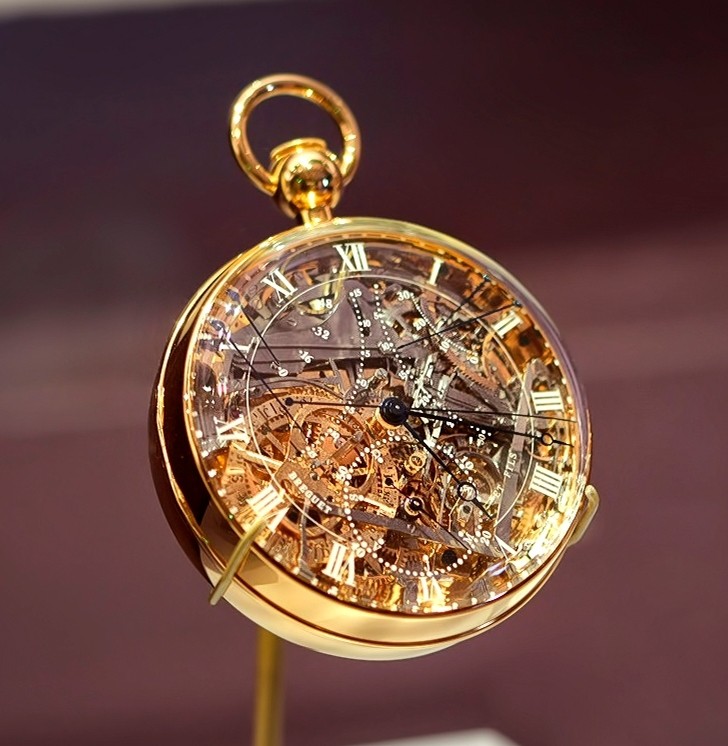 According to legend, in 1783 this watch was ordered for the French Queen Marie Antoinette by her mysterious admirer. The order was to be executed by the court watchmaker of the French monarchs Abraham-Louis Breguet, but the master did not have time to finish his work. His son Antoine Louis took over the master’s work, but by the time the clock was finished the queen, alas, had climbed the scaffold. In total it took 44 years to make the watch! A series of tragic events in the history of the model did not end there. In 1983 the clock was stolen from the museum in Jerusalem, and only in 2004, it was decided to restore the lost masterpiece with the help of documents and drawings found in the archives of the Breguet museum. The restoration process took 4 years and if the Queen could have seen the result of this work, she certainly would not have been disappointed. The 60mm case of the copy contains a mechanism of 823 parts, which supports the functions of a perpetual calendar, minute repeater, indication of the equation of time, and a number of other functions. In total, the watch has 23 complications, and the cost of the model is estimated at $ 30,000,000. Auction models Patek Philippe surpassed in price and so few people manage, and if it is a special lot for charity trades, then expect the watch will set another record. In November 2019, at the 8th Only Watch Charity Auction in Geneva, a Patek Philippe double-sided watch with 20 sophisticated functions went from the hammer for CHF 31,000,000, which once again confirmed Patek Philippe’s status as the top record holder for watch auctions. The watchmakers of Patek Philippe took the double-sided watches created in 2014 for the brand’s 175th anniversary. Pink gold was replaced by rare steel, and the dial on the front side was painted with the current salmon color. Functionally, nothing has been changed. The movement with its patented rotating case seems to support all the complications known to modern watchmakers (except for the turbine, the equation of time, and some kind of tide indicator) and is also equipped with an absolutely unique option to rehearse the date. Not to get confused in the control buttons help hints in the form of engravings. The Fascination model, created within the walls of the Graff Diamonds jewelry house, appeared in public for the first time at Baselworld 2015. Setting an absolute price record of $40,000,000, the platinum quartz transformer watch impressed guests with its fantasy finish and flawless clarity of diamonds weighing 152.96 carats. The model’s drop-shaped dial covers a large pear-cut stone that can either be used for its intended purpose, showing the current time, or turned into a luxury bracelet. A stone removed from the dial can be placed in a necklace or ring if desired. It must be admitted that the name for the watch was chosen quite successfully: the Hallucination model, presented by the British jewelry house Graff Diamonds at Baselworld 2014, is estimated at $55,000,000. Wouldn’t it be a hallucination to look at this dizzying kaleidoscope of colorful diamonds weighing 110 carats. No, not a hallucination. According to the head of Graff Diamonds Lawrence Graff, he thought for many years about creating a truly special watch that would reflect the brand’s all-consuming love for diamonds. Well, the most cherished dreams tend to come true. Even if for $55,000,000.

Wait! What’s Going On In This Pictures?