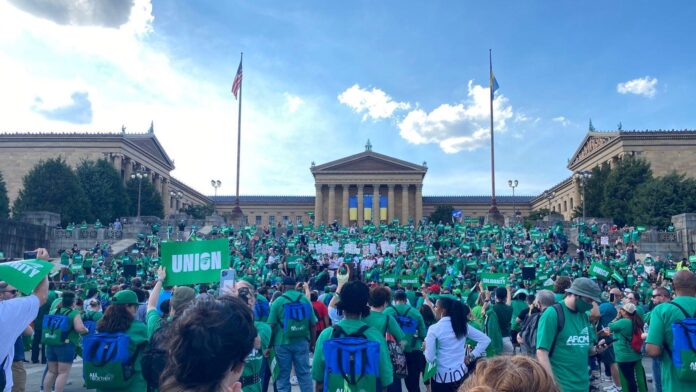 Unionised workers at the Philadelphia Museum of Art (PMA) held a rally on Wednesday (13 July) that drew nearly 2,000 people, according to organisers, to the iconic steps of the museum and surrounding areas. This is the third public event the union has held in recent months to draw attention to its slow progress in contract bargaining efforts with museum administration. Last month the union and its supporters held a rally that drew a crowd of around 600 people.

Formed in 2020 with AFSCME, the union organised a smaller bargaining committee in spring of this year that has been meeting with the museum administration on a weekly basis. Even so,  unionised workers and museum administrators remain at odds and the PMA union has gone without a contract for 23 months. A new union’s first contract can take an especially long time to negotiate and ratify.

“I would say that negotiations have been strained. I think now that we’re moving towards having only wages and benefits on the table, we’ve moved off a lot of non-economic issues,” says Nicole Cook, programme manager for graduate academic partnerships at the museum and a member of the union bargaining team. “And now that we’re focusing on wages and benefits, it’s very clear that our proposal as a union and the proposal that management has kind of stuck with for the past several sessions of bargaining, are very far apart.”

Throughout, the museum’s union has been very active on social media with updates about bargaining sessions. Two major issues they have called attention to are wages and maternity leave. An Instagram post from May stated: “Back in negotiations at 1 pm. We still need paid parental leave. This is a major museum and large employer with a $60m dollar budget that has ZERO parental leave.”

When asked about parental leave, a spokesperson for the PMA said, “The museum in May proposed to provide paid parental leave at 100% of the regular pay rate for up to two weeks of leave, subject to certain standard eligibility criteria.”

Issues related to reproductive rights and childbearing have gained a new sense of urgency following last month’s Supreme Court ruling overturning Roe v. Wade. Many museums and institutions in the US do not have clear guidelines on maternal and paternity leave. On average, most businesses in the US offer up to four weeks of paid leave, according to the New York Times.

Another post from the PMA union’s Instagram from 6 July notes, that in the museum’s most recent financial disclosure, among the museum’s eight curatorial departments the people with the two highest-paid positions are men. Another post claims that of the top 206 museums in the country, the PMA ranks 16th yet its workers are paid on average 17% less than the median pay for their jobs across all US art museums.

“The museum respects the right of the union to make their voices heard, and is dedicated to making further progress together in the negotiations,” a museum spokesperson says. “The museum and the union have reached agreement on over two dozen proposals covering a number of issues, ranging from the establishment of a labor-management committee to anti-harassment. Negotiations over a first contract can often take two or more years. The museum continues to meet regularly with the union and is committed to reaching a fair and appropriate contract.