Chinese artist-activist Ai Weiwei is cynical about the protests against anti-Covid restrictions sweeping across China and predicts that they are not likely to last.

“I don’t see that there’s a crucial organization or leadership in these protests. There’s no clear political agenda, so it’s very easy to arrest them and move on,” Ai said in an interview with Reuters from his home in Portugal on Monday.

His comments on the protests, which broke out over the weekend following a fire in Urumqi that killed 10 people who were reportedly trapped because of the region’s extreme Covid lockdown rules, mirrored remarks he made upon receiving the 2022 Praemium Imperiale sculpture prize in September. At the ceremony in London, he said that he was told by a security bureau officer that he could be jailed for simply asking for freedom, and was warned of the consequences should he set foot in his home country again. 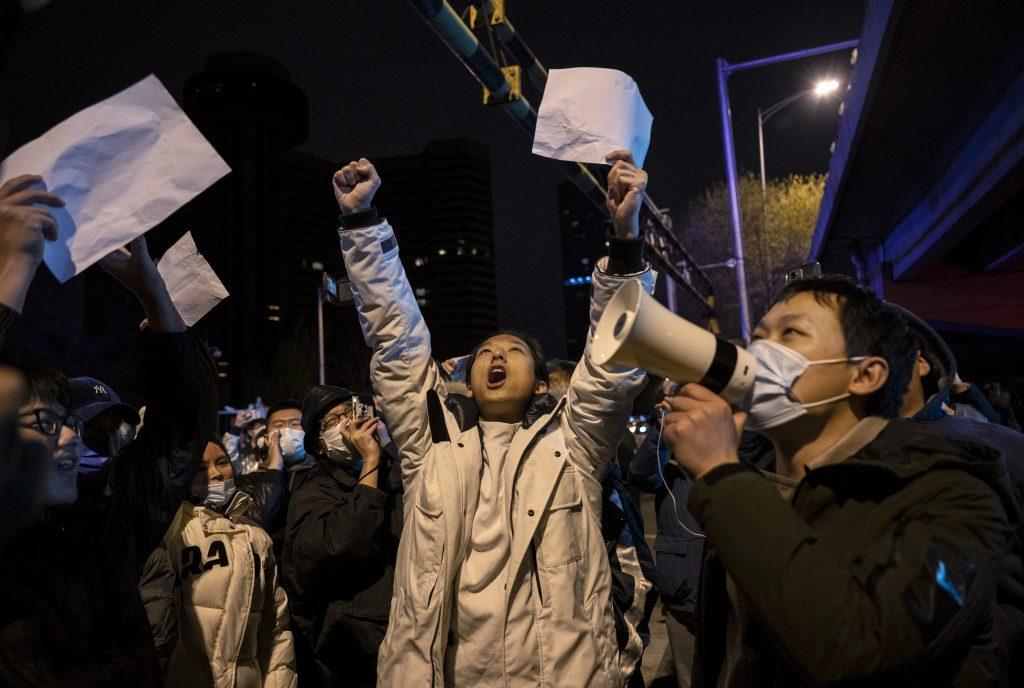 “I don’t think anybody can lead this kind of protest because China has no [such] political environment. Over the past 70 years, they [the Chinese Communist Party] cleaned out people like intellectuals and the media who can raise questions,” Ai continued.

“I’m quite cynical about this. I’ve seen too many young people who have been arrested, and other people became silent.”

The protests, now known as “A4 Revolution” or “White Paper Movement” because of the pieces of blank A4 paper held by the demonstrators,  have taken place in at least 18 cities and provinces across China, including Beijing, Shanghai, Hangzhou, Chongqing, Nanjing, Wuhan, Chengdu, Guangzhou, Shenzhen, and Xi’an.

Crowds have gathered in public spaces to commemorate the victims of the Urumqi fire while demanding the end of the prolonged, strict lockdown measures imposed in accordance with China’s ongoing zero-Covid policy. The order is championed by President Xi, who recently broke party tradition and secured an unprecedented third term as general secretary of China’s Communist Party.

Ai Weiwei, Study of Perspective: Tian’anmen (1997). M+ Sigg Collection, Hong Kong. The image of the work can no longer be seen on the museum’s web archive. © Ai Weiwei.

Protesters are demanding more than just the relaxation of Coivd rules. They also asking for freedom and political change, chanting “Down with Xi Jinping” and “Down with the Chinese Communist Party.”

But in the eyes of Ai—a long-time critic of Beijing, who was detained by the Chinese government for 81 days in 2011 and has been living in exile since 2015—chanting and protesting with a piece of blank paper will make little difference when you consider the outcomes of the 2019 Hong Kong protests and the 1989 pro-democracy movement that ended in bloodshed during the Tiananmen Square massacre.

“Even if something happens [on] the Hong Kong scale or 1989 scale it [still] won’t shake the government,” Ai said.

Another reason for Ai’s pessimism is the lack of real support from Europe. “European nations never really support human rights in different nations. They have their own agenda. They want to do business in China, that’s their priority,” he said.

As of Tuesday, November 29, footage of increased police presence in cities where protests have occurred was being circulated online. Uniformed officers were spotted performing stop-and-searches and checking people’s smart phones, both in the streets and on underground trains. Video clips of individuals being taken away by the police are also being circulated, but it is unclear how many people are being detained. Yesterday, the U.S. Embassy issued a statement warning American citizens in China to stock up on a 14-day supply of medications, bottled water, and food.

Despite the challenging circumstances, some are not giving up hope for change. More protest art is being created and circulated, and more artists, cartoonists (see Hong Kong’s Ah To’s work above), and artists in exile are showing support by creating new works that respond to the protests.

Chinese dissident artist Badiucao, who is opening his exhibition “We Are the Last Generation” on Tuesday at the European Parliament in Brussels, remains hopeful.

🧵1/ We Are the Last Generation

🔥I will have a new exhibition in European Parliament @Europarl_EN. 我将在欧盟议会举行新展览 《我们是最后一代》

“I think the younger generation is always more informed than we understand. From no one taking to the streets to protests in the city becoming an option is already a huge success,” Badiucao told Artnet News, while urging people to listen to what the young protesters are saying.

“The fire is still burning and every minute people are learning from the protest itself and developing new strategies. So yes, there is hope. As an artist [living] abroad, creating art supporting the movement and informing the outside world about the situation and the hope in China is what I can do.”

Badiucao is staging an A4 blank paper protest during the opening of his Brussels show, which addresses the Covid lockdowns in China.

A Christmas Miracle? Israeli Archaeologists Are Freshly Excavating a Tomb Believed to Hold the Woman Who Helped Deliver Baby Jesus