Home News In the Midst of a Volatile Market and Gloomy Economy, Christie’s Hong... 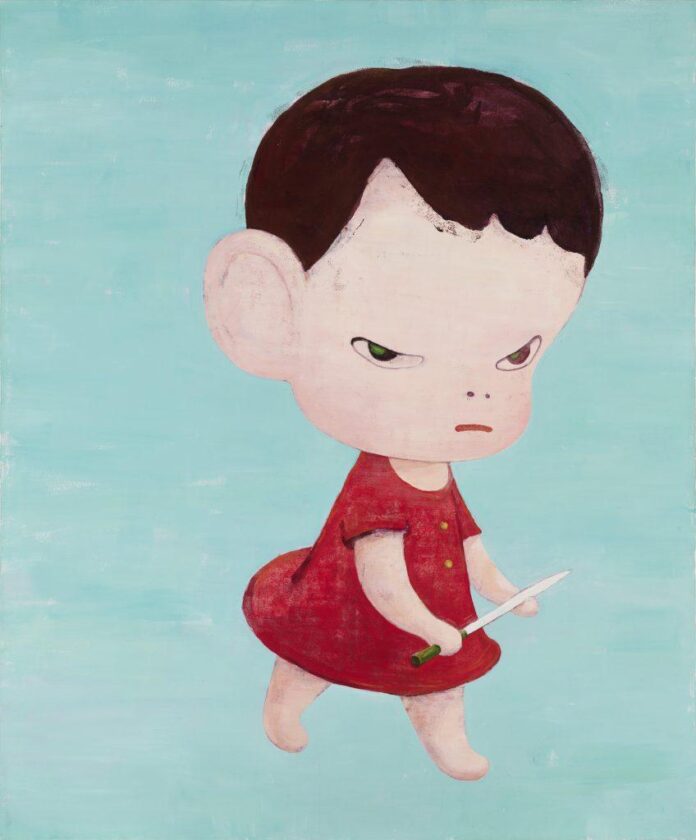 Christie’s Hong Kong evening art sales on Wednesday achieved a combined total of more than HK$817.8 million ($104.8 million). Although results were within the presale expectations, they were only around half the amount brought in over the past three editions of evening art sales held by the house in Hong Kong this and last year, despite the successful sales of some of the star lots, such as the Asia debut of Joan Mitchell, and works by sought-after Asian names such as Yoshitomo Nara and Yayoi Kusama.

The less than three-hour event that was part of the house’s marquee autumn sales series in Hong Kong was a combination of two sales offering a diverse range of Asian and western blue-chip names, as well as emerging ones. The 20th/21st Century Art evening sale offered a total of 51 lots, with adjusted presale expectations at HK$616 million to HK$916 million ($78.9 million to $117 million, all final sale prices include fees, presale estimates do not). This was followed by the debut of the Post-Millennium Evening Sale, which offered 17 lots that “reverberate the ever-evolving world of images compelled by technologies and ephemeral content of our times” and expected to sell for between HK$112.5 million and HK$164 million ($14.4 million to $21 million). 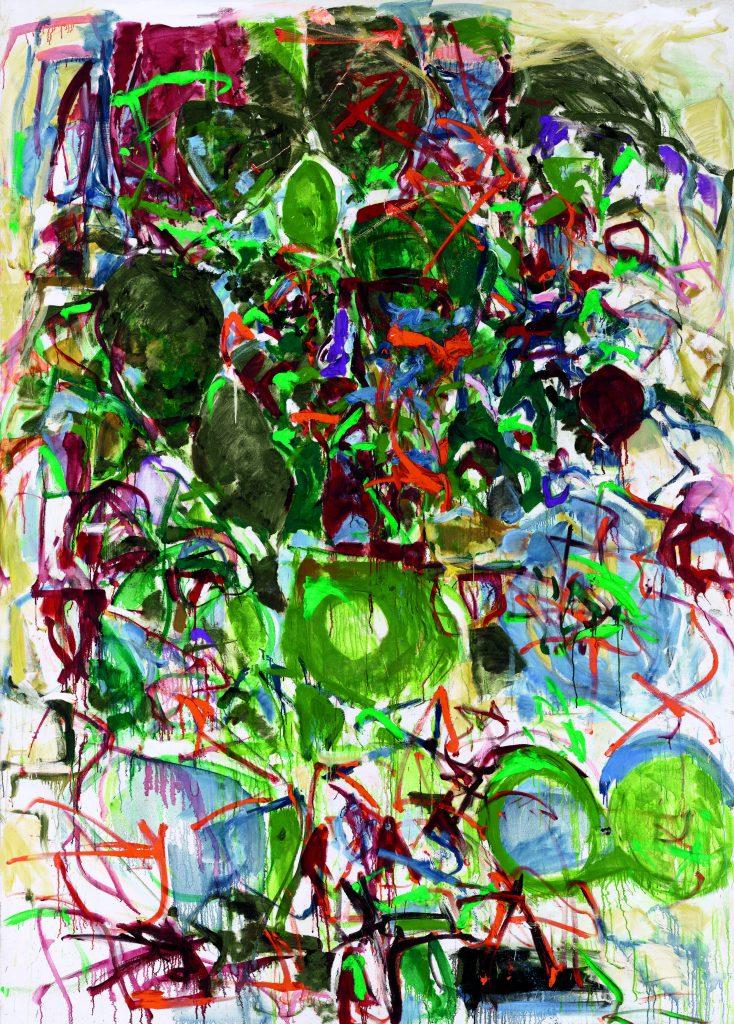 About a month prior to the sale, the house shared a much higher estimate of more than HK$1.7 billion ($216 million) in a November announcement, aligned with previous results for such sales. But a number of high value lots were either withdrawn before the sale or left unsold. First, it was the T.rex skeleton named Shen that was yanked after questions were raised about its completeness. Sanyu’s (1940), which graced the cover of this season’s catalogue, and was expected to fetch between HK$85 million and HK$100 million ($11 million to $13 million), was withdrawn before the sales kicked off. Paintings by prominent 20th century names including Zao Wou-ki (HK$68 million to HK$98 million/$8.7 million to $12.6 million) and Wu Guanzhong (HK$19 million to HK$25 million/$2.4 million to $3.2 million), for example, failed to sell.

Several works by Southeast Asian artists from a similar period failed to find a buyer. Pierre-Auguste Renoir’s 1910 painting that was expected to sell for HK$15.5 million to HK$23.5 million ($2 million to $3 million) and a 2019 painting by American artist Pat Steir were bought in as well. Chinese contemporary artist Zhang Enli’s 2005 painting with expectations at HK$3.5 million to HK$5.5 million ($450,000 to $700,000) was also pulled before the sale night began. 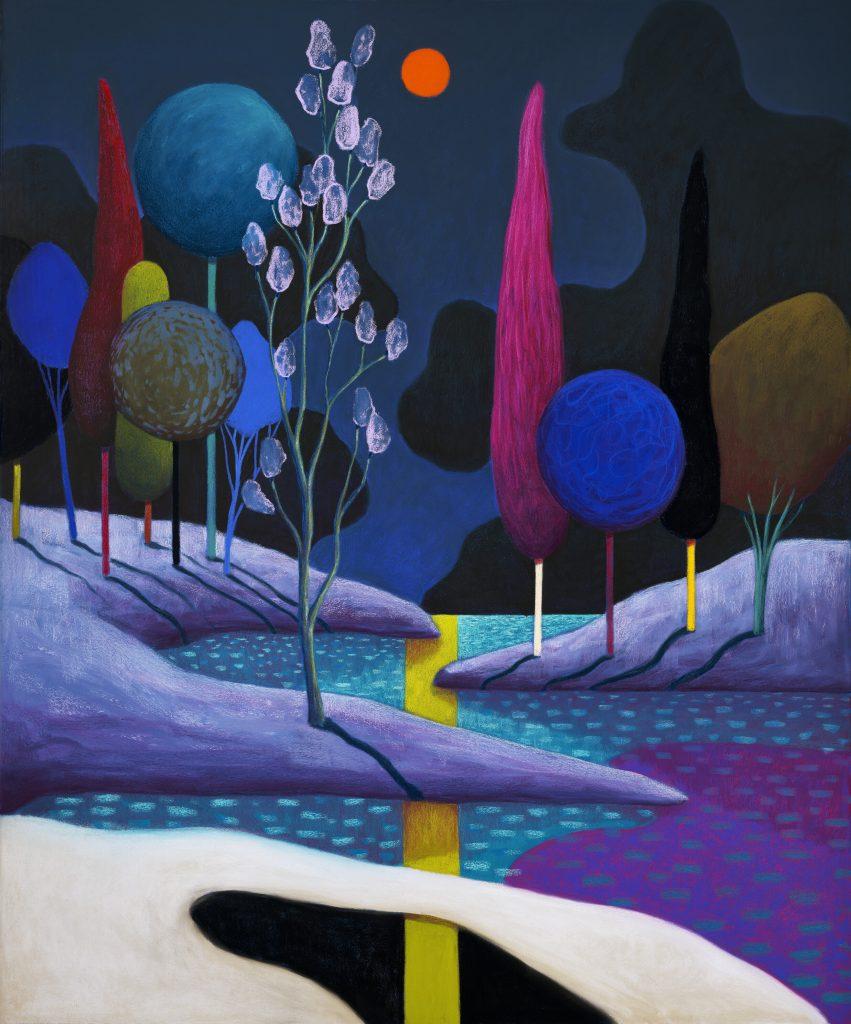 The disappointing performance of the high value lots contributed to the sale total coming in at significantly less than the HK$1.4 billion ($184 million), achieved in May this year, last December‘s HK$1.5 billion ($192.6 million), and the robust HK$1.6 billion ($204 million) in May 2021. The fact that Christie’s did not issue a post-sale release after Wednesday’s evening sale in order to wait to include Thursday’s day sale could be an indicator of its performance. Another reason could be a smaller number of lots offered. Christie’s only offered 68 lots in total throughout the night, less than the 70-something lots offered in recent editions.

The results could point to the turning tide of the global art market amid an increasingly uncertain future for the global economy and geopolitical instability. Wednesday night’s auctions were also held against the backdrop of current volatile situation of China’s economic and socio-political situation.

The sales went live just hours after news of the death of former Chinese leader Jiang Zemin. Jiang was a figure associated with China’s accelerating economic growth at the turn of the century, but the country’s economy is now facing tough challenges brought by its zero-Covid policy. It also coincided with the anti-Covid restrictions protests that erupted over the weekend across the country, the largest unrest China has seen since 1989. 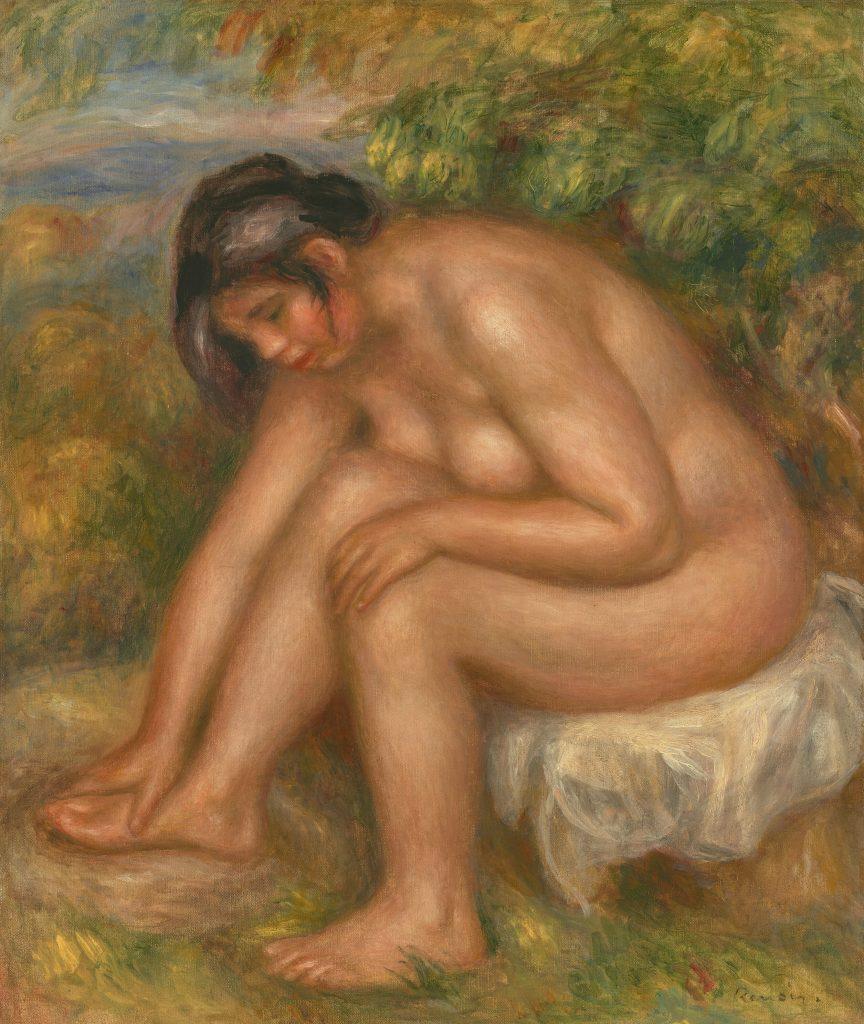 Nevertheless, Wednesday’s sales still saw a number of new records set, particularly among the younger artists. Hence the results were already better than expected amid the challenging circumstances, several industry insiders from Asia told Artnet News. “This is not a seller’s market,” said one Hong Kong-based art consultant who declined to be named.

But the evening event was nonetheless a lively one as some of the house’s staff from offices across the world turned up for the sale in person, rather than taking part via livestreaming, a notable change after the mandatory hotel Covid quarantine was lifted for the city.

The 20th/21st Century Art Evening sale rounded out at HK$678 million ($86.9 million), just above the lower end of its presale estimate, with a sell-through rate of 84 percent (eight works unsold). It had 16 lots guaranteed, including two house guarantees, while the rest of them guaranteed by a third-party.

This was followed by Yoshitomo Nara’s (1994), which sold for HK$71.9 million ($9.2 million), also within estimate—and nearly 44 times the price achieved when it was last sold at a 2004 Sotheby’s sale in New York for just $209,600, according to the Artnet Price Database. This painting nearly passed but it was eventually sold to a Christie’s staffer from the house’s Rome office, who was bidding on behalf of a client on the telephone. 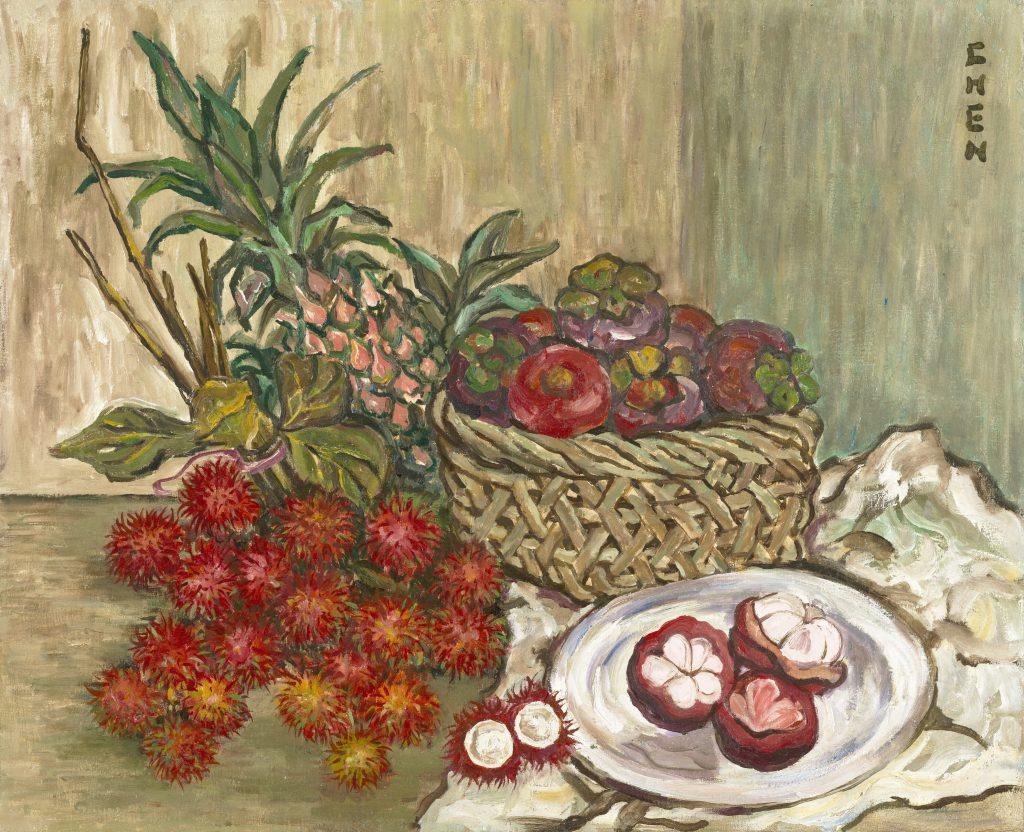 Kusama’s painted in 2006 was another highlight of the night. It sold for HK$53 million ($6.8 million) after rounds of fierce bidding. The sale price nearly doubled that made in 2019 when the work was last sold at a Christie’s Hong Kong sale.

Indonesian artist Christine Ay Tjoe’s 2016 abstract painting, attracted competitive bidding, with 16 phone bidders fighting for the work at one point. It sold for HK$10.3 million, nearly five times the higher end of the presale estimate, although it did not break her artist record. Canadian artist Jean Paul Riopelle’s widely exhibited 1954 painting sold for HK$42.5 million ($5.4 million), nearly double the presale estimates. A new artist record was achieved for Singapore’s Georgette Chen with the sale of a painting (circa 1960s). The work sold for HK$13 million ($1.7 million) more than double the sale price from the last time it was sold at a Christie’s Hong Kong sale in 2018. 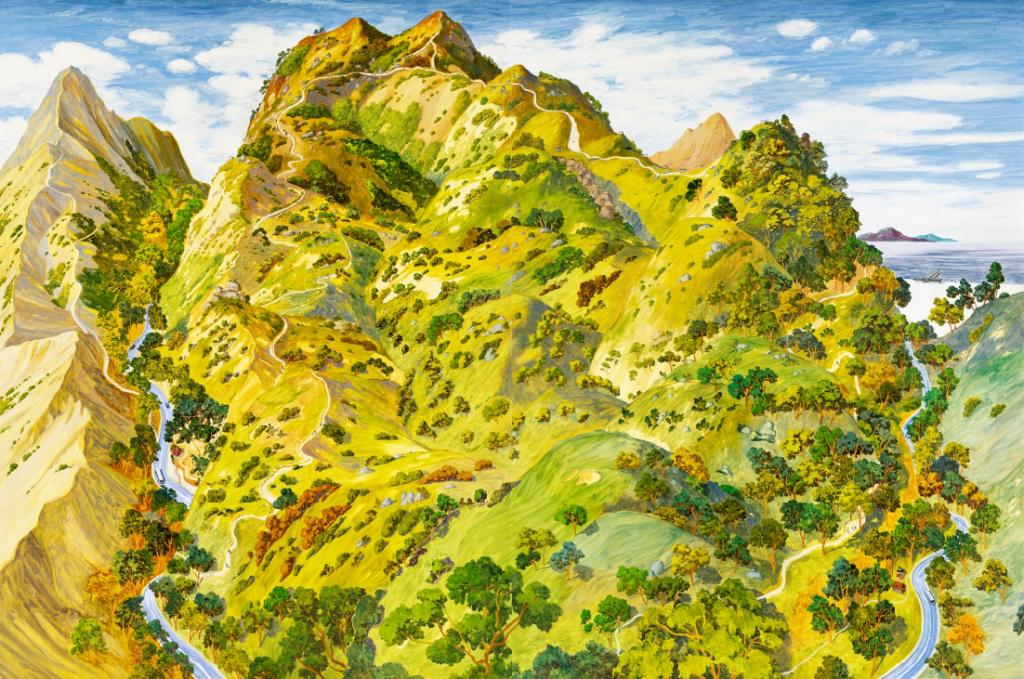 Only one lot was unsold at the Post-Millennium Evening sale, which achieved a within estimate sales total at HK$139.6 million ($18 million) with a 94 percent sell through rate. Two lots carried third party guarantees.

The top lot of this sale was the 1980-born Nicolas Party’s (2018), which sold for HK$52 million ($6.7 million), a new artist record achieved since last November’s Christie’s New York sale. Korean artist Anna Park, born 1996, also had her artist record set at HK$3.8 million with the sale of her 2020 charcoal on paper work  The 1986-born Hong Kong artist Stephen Wong Chun Hei, who is having his London solo debut with Unit London at the moment, made his auction debut with 2018 painting . The work attracted a lot of interests and it sold just above the HK$1 million ($128,109), four times the higher end of the presale estimate.

After the middling results achieved by the earlier evening sale, the results for the Post-Millennium sale show that while buyers might be responding to the unstable geopolitical and global economic climate on the higher end of the market, there is still interest in taking a chance on younger names.

Read the 15 Most Popular Artnet News Stories of 2022, From Intentional (and Unintentional) Art Thieves to a Gold Cube With Its Own Security