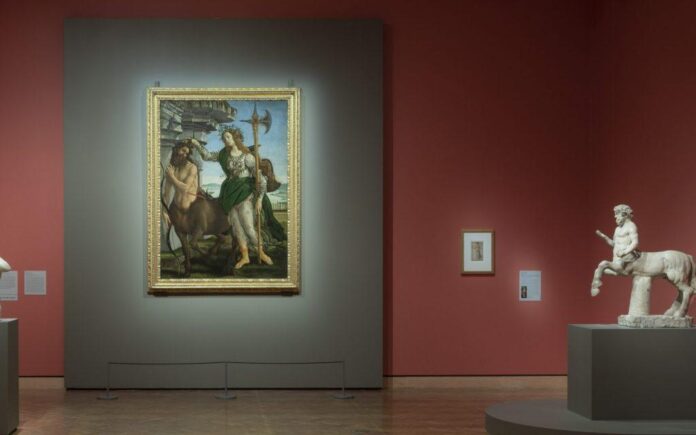 Botticelli’s Minerva and the Centaur (ca. 1482), which typically hangs beside his iconic Birth of Venus at the Uffizi, is among the 45 works shipped from Florence to the Minneapolis Institute of Art (MIA) for a major new show. In Minnesota, its new neighbor is an ancient Roman sculpture of a centaur, also from the Uffizi. This is one of several stunning juxtapositions in “Botticelli and Renaissance Florence: Masterworks from the Uffizi” (until January 8, 2023)—an exhibition made possible by the close relationship between the Italian and American museums.

According to several individuals involved in its planning, the show is a reflection of the powerful ties between the two art institutions. The Uffizi’s director, Eike Schmidt, was curator of decorative arts and sculpture at the MIA for nearly seven years before taking up his post in Florence in 2015.

Two years ago, in the midst of the global pandemic, the Minneapolis museum decided it needed to plan something big for when life returned to normal. “We thought, we know this guy at the Uffizi, why don’t we give him a call?” Matthew Welch, the MIA’s deputy director and chief curator, told Artnet News at the show’s preview. “Of course, he was happy to talk to us.”

Welch added that the show is timely considering how we have spent the past two years practicing social distancing: “The Renaissance is all about the human touch. This is the perfect invitation back into the world.”

The exhibition, said Katie Luber, the Minneapolis museum’s president and director, “is an amazing example of the power MIA has to work with international partners—in this case the Uffizi—to bring works of art to our community that many of our visitors would never otherwise have the opportunity to see.”

She sees similarities between Florence and Minneapolis, which also has a vibrant art scene and a lot of cultural philanthropy. “There’s a spirit of inquiry here that I think is very similar to what you would see in Florence,” she said. Luber, who called Schmidt a “genius,” noted that his ability to successfully fulfill roles in both Minneapolis and Florence also speaks to the similarities between the cities.

When Luber and Rachel McGarry, the MIA’s chair of European art—who co-curated the show with Cecilia Frosinini, the director of painting and drawing conservation at Florence’s Opificio delle Pietre Dure—visited the Uffizi, she asked McGarry to see if Schmidt would loan the centaur sculpture. Although his initial response was no, he soon agreed. “It was because we were there together, looking together, thinking about these things together,” Luber said.

Schmidt said knowing the team in Minneapolis put him at ease about the exhibition. “I knew with whom we would be working,” he said. “If it would have been another museum, I would have also been open-minded, but I would have needed to figure out how many people do we have, what’s their background.”

Many new discoveries were made ahead of the exhibition. For example, a technical analysis of the MIA’s portrait of a young woman (ca. 1495) confirmed it is by Benedetto Ghirlandaio, brother of the more famous Domenico Ghirlandaio. And visitors to the MIA will be able to view delicate, rarely-seen Botticelli drawings—which can only be displayed 12 weeks every five years. One was requested for a show in San Francisco, so the Uffizi is sending it for six weeks each to Minneapolis and California.

“We took inspiration from King Solomon,” Schmidt joked of cutting the time in half. Among the drawings on display in Minneapolis is Two Male Nude Figures (ca. 1475–82), which hangs beside Spinario (late first century B.C.E. to early first century C.E.), the sculpture he copied.

Here is what Schmidt told us about three other highlights from the show: 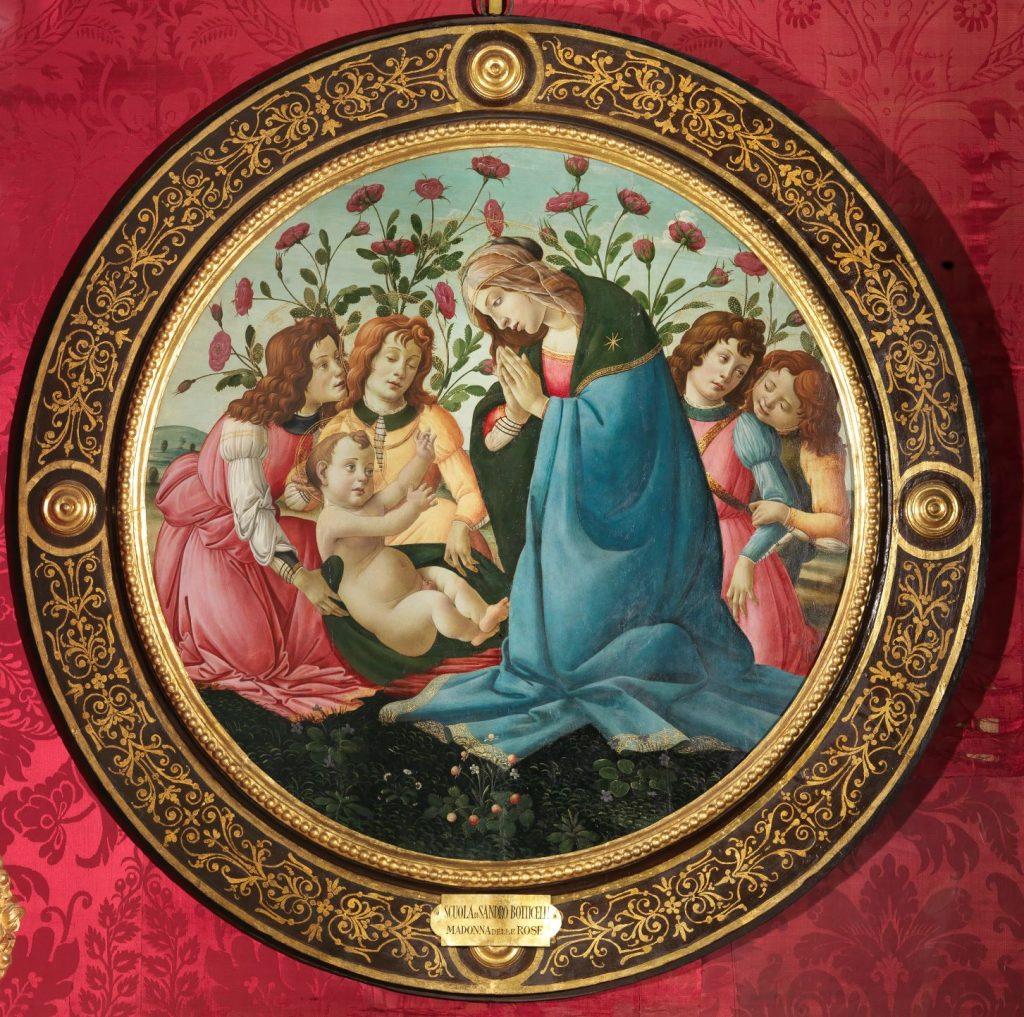 The frame of the Adoration of the Child with Angels, also known as Madonna of the Roses (1490–1500), still reads “Scuola di Sandro Botticelli,” but conservation and scholarly analysis has reversed the attribution. “Before, it was thought to be a workshop [piece], with perhaps [details by] Botticelli,” Schmidt said. “It’s a Botticelli with workshop [details].” Student work can be seen, particularly in an awkwardly drawn figure on the right, and Schmidt doubts that the older, in-demand Botticelli painted each leaf and flower. The Madonna figure, however, is characteristic of his hand. 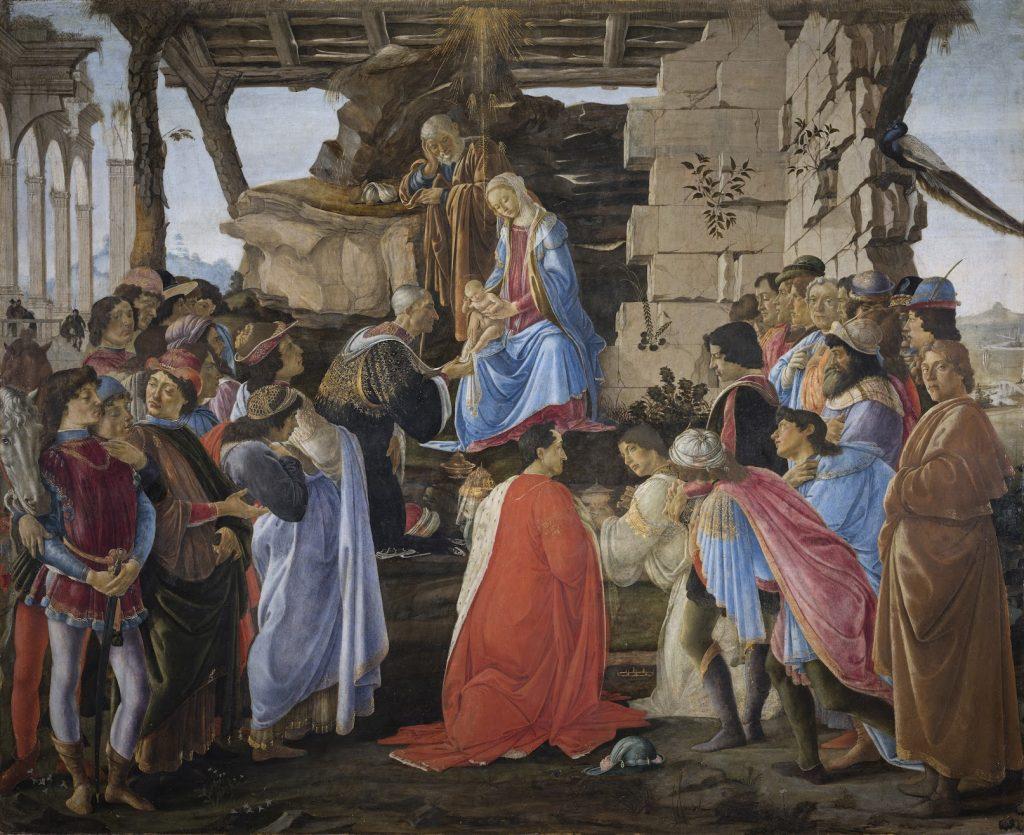 Adoration of the Magi (1470–75) famously features a self-portrait of Botticelli in the foreground on the right. In the New Testament scene, the artist included the painting’s commissioner alongside several prominent Medici family members—both living and dead.

“Nowadays, we would think, ‘How dare they!’ But it’s the opposite,” Schmidt said, explaining that it actually shows their humility as they get down on their knees to take part in this very old tradition. He noted that the Medici would dress as the Magi as part of a sacra rappresentazione, or sacred theater, during annual events to mark the Epiphany.

The picture reflects the wealthy’s desire to be close to Mary, Joseph, and the Christ Child, and for Florentines to appear alongside the Medici. “It’s about being close to power—taking your selfie with a famous baseball star,” Schmidt said. “It’s a diagram of power in Florence.” 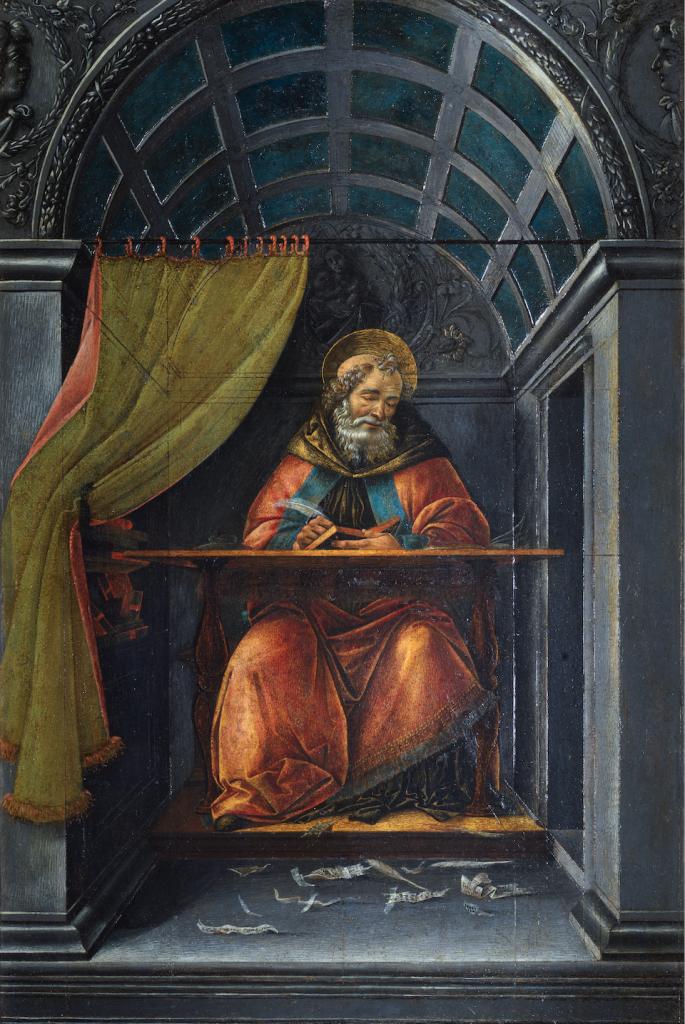 Another newly understood work is Saint Augustine in His Study (ca. 1494), which features the saint along with roundels of Roman emperors and the Madonna and Child, suggesting continuity between Saint Augustine and pagan antiquity. Some scholars think the saint is translating a text, but the torn papers on the floor don’t jibe with that analysis. One would scrape and reuse costly velum, rather than discard it.

“The new theory—which is totally convincing to me and is published for the first time here in the catalog—is that these are actually [Saint Augustine’s] retractions,” Schmidt said. “Towards the end of his life, when he looked back at all his theology, he said, ‘Well this is where I was wrong.’”

Botticelli’s blend of ancient Roman symbolism with (then) contemporary Catholic iconography is a recipe that is at the heart of the exhibition, and it typified the Renaissance, said Schmidt. “I would argue that this is more relevant than certain things that are explicitly reacting to specific issues of the present day,” he said.

“Botticelli and Renaissance Florence: Masterworks from the Uffizi” is on view at the Minneapolis Institute of Art, until January 8, 2023.

Germany 6 times increased its budget for the purchase of art