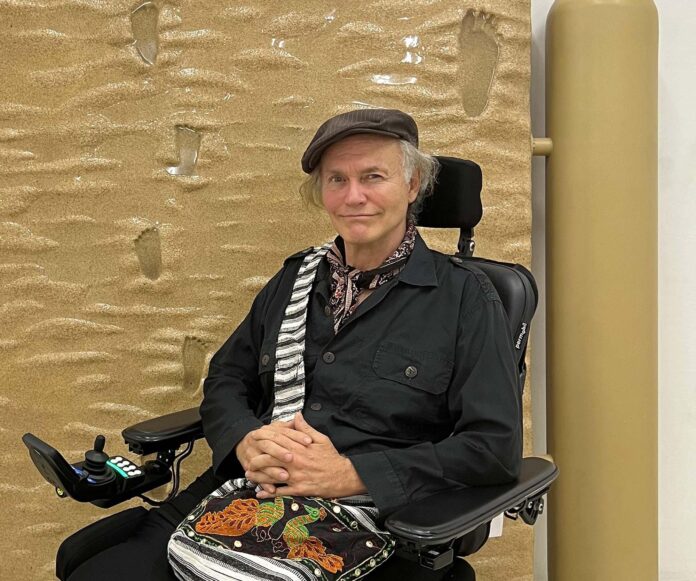 Ashley Bickerton, a breakout star of New York’s Neo-Geo art scene of the 1980s, died on 30 November at his home in Bali, Indonesia. He was 63. His death was confirmed by Gagosian, which began representing the artist in May of this year. He had been diagnosed with ALS (also known as Lou Gehrig’s disease) last year. Bickerton was best known for his inventive, often bitingly satirical mixed-media practise, which ranged from slick sculptural riffs on corporate iconography to meditative works investigating identity and environmental degradation.

Bickerton was born 26 May 1959 in Barbados, where his father, a British linguist and scholar, was conducting research on pidgin tongues. That scholarly pursuit would cause the Bickerton’s family to relocate numerous times during his childhood— they lived on four different continents before eventually settling in Hawaii in 1972. Bickerton attended the California Institute of the Arts, where he studied under the famed conceptual artist John Baldessari. After receiving a BFA in 1982, he moved to New York City and enrolled in the Whitney Museum’s Independent Study Program, eventually becoming enmeshed in the city’s lively East Village arts scene, where he found an enriching artistic environment that would shape his material and conceptual focus for years to come.

“My identity was forged [in New York], and my language was forged there,” Bickerton told the Brooklyn Rail last February. “Even my sense of being an artist in the larger world was forged there. In that sense, I’m a New York artist, always will be.”

The works that Bickerton created in New York were slick, slippery things that fused painting, sculpture and corporate branding into sly assemblages that took aim at America’s consumer culture. His wry conceptual approach is encapsulated in a work like Tormented Self-Portrait (Susie at Arles) #2 (1987-98), in which the titular self-portrait is a collection of corporate logos, which Bickerton figuratively signed with his brand identity alter ego, Susie Culturelux. This deadpan discipline would eventually be woven together with the work of Bickerton’s East Village contemporaries such as Peter Halley and Jeff Koons into the movement dubbed Neo-Geo, although Bickerton preferred the term Commodity Art. For much of the 1980s, Bickerton found increasing critical and market success.

Eventually, though, the proximity between art and commerce became too much for Bickerton, and in 1993 he relocated to Bali. The works Bickerton made after leaving New York’s art world grew into complex figurative examinations of an identity in flux, folding in meditations on his itinerant childhood, his relationship with language and the postcolonial prisms that informed his stretches of island living. They also grapple with the environmental destruction wrought by the capitalist culture he had so consistently skewered years earlier. These are works possessed by blue-skinned parodies of Euro-American decadence, as seen in pieces like The Preparation With Green Sky (2007), or obsessed with visions of spoiled beachfront idyll, as captured in his Flotsam series of paintings.

Bickerton may have modulated his material approach and conceptual focus over the decades, but his work earned acclaim for much of his career. He exhibited extensively throughout the US until his death, and his debut solo exhibition with Gagosian is set to open next year. His works are in the collections of institutions including the Museum of Modern Art in New York, the Stedelijk Museum in Amsterdam, Tate Britain and the Whitney Museum of American Art, among many others.

“Ashley had a rebellious and singular voice in the art world that continuously captured the ethos of the time,” Larry Gagosian said. “He remained innovative until the very end, even with his latest body work that is yet to debut. I am proud to have known him.”