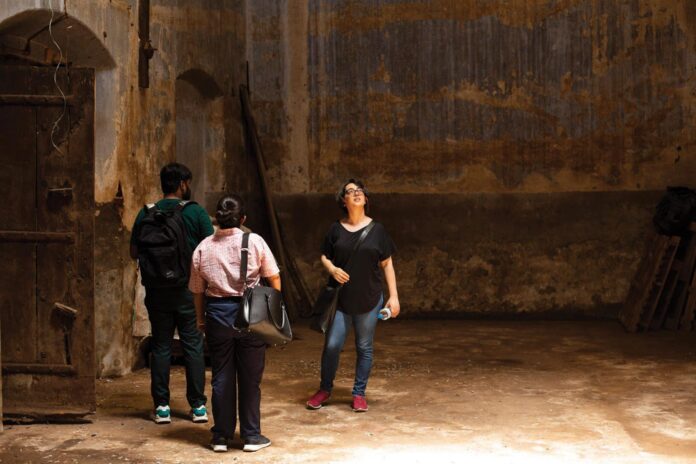 After a two-year delay due to Covid-19, the Kochi-Muziris Biennale in Kerala, southern India is finally about to hold its fifth edition next week. But while the 60-strong artist line-up has largely endured the wait, the content has shifted.

“Previously the show was more tactile, now there are more video and audio works—things that can be transferred online and succeed in the digital realm,” says the curator, Sinagporean-Indian artist Shubigi Rao. This poses something of an issue for the show’s identity, as the biennial is known for its high percentage of site-specific commissions. Artists are typically asked to respond to the history of Fort Kochi, and the ancient lost harbour of Muziris, as ports along extensive trade routes. But ongoing delays and uncertainty since 2020 have meant that a number of works commissioned by the biennial debuted elsewhere. Large installations by the Pakistani artist Ali Kazim and Vietnam’s Thao Nguyen Phan were first shown earlier this year at the 59th Venice Biennale before making their way to India.

Still, several of the artist line up—mainly from South and Southeast Asia—will show new works commissioned by the biennial, which includes sculptures by Amol K. Patil, paintings by Vasudevan Akkitham and a film essay by Priya Sen chronicling Delhi through and after lockdowns. Goa-based Sahil Naik will present the large-scale installation All is water and to water we must return that charts the history of a village lost to a reservoir, and which resurfaces briefly each year.

While her time as the biennial’s artistic lead has seen enormous global tumult, Rao says her curatorial statement, drafted in various airports during 2019 as she travelled the art world circuit, has remained virtually unaltered: “My specific interests driving this show—the global spread of information, conditions of precarity and inequity—haven’t changed, they’ve only grown more apparent.”

Centred around a theme of “optimism even in the darkest absurdity”, Rao hopes that her show will reflect the endurance of art practices that have weathered the pandemic’s storm and, furthermore, will stand as a testament to the loyalty and resilience of the biennial’s exhibitors and workers. “The artists and collectives in the show have in some cases changed their practices, broken apart, lost their studios and gone through great loss—and still they stuck with us,” she says. “Talk about care and community in the art world is often just that—talk. This to me feels like a rare instance of it being put into practice.”

Extra public scrutiny will be no doubt be paid to the validity of such claims: the last edition of the biennial, which opened in December 2018, has been mired in a number of administrative scandals. Chief among them is a dispute between the exhibition’s labourers and contractors, who accuse the Kochi Biennale Foundation (KBF), which organises the event, of not paying them promptly and in full. KBF officials maintain that these accusations are baseless, a claim supported by the local architecture firm who was assigned to mediate the dispute. Nonetheless, as recently as this month, some contractors have told local media that the issue has not been resolved. The last edition also saw its co-founder Riyas Komu accused of sexual harassment in posts published anonymously on Instagram. Komu stepped down as KBF secretary during an internal investigation, which, in the absence of an official complaint, cleared him of any wrongdoing. He declined to resume his position.

This time round, the biennial seems determined to prove that politics of care and resilience can indeed can be ones that extend beyond art practices and into social ones too. Evidence of this ethos can be found in new features such as the Invitations exhibition programme, which provides space for parallel shows by other, unrelated, arts festivals in South Asia, such as the Chennai Photo Biennale. This is a sure sign of the biennial’s maturity as an institution, according to its founder-president Bose Krishnamachari, reflecting on his time leading the show. The biennial celebrates a decade of existence this month, having held its first edition in December 2012.

And while the Kochi-Muziris Biennale continues to spread its roots across the subcontinent, Krishnamachari maintains that its focus remains doggedly local, and will always treat Keralans—around 500,000 of whom visit the show every year—as the primary audience. “We didn’t get our name of ‘the people’s biennial’ for nothing,” he says.

To help fulfil this commitment, the Keralan government, which partially funds the biennial, was recently engaged in talks to buy Aspinwall House—a large sea-facing heritage property that regularly hosts parts of the biennial—from the commercial property developers DLF. This purchase would have allowed the Kochi Biennale Foundation to use the venue throughout the year, allowing it to maintain permanent programming. Talks ultimately fell through earlier this week, New Indian Express reports, with DLF backing out due to issues over the asking price. The biennial’s fifth edition will use Aspinwall House as one of its venues during the four month run.

Set backs aside, that the government now considers the presence of a year-round contemporary art venue for the foundation to be a priority is “a huge achievement”, Krishnamachari says. He points out that when the biennial first launched, the state of Kerala lacked a single contemporary art museum. Asked whether he can quantify the effect the event has had, he says: “Before we came, no one understood art speak—installations and wall texts were totally foreign. Now local films in Malayalam will throw around the term ‘biennial’. I consider that as good a mark as any.”

• Kochi-Muziris Biennale, various venues, Kochi, 12 December-10 April 2023; the exhibition is supported by the government of Kerala and its official partner BMW