Home News ‘My grandma will jump from a helicopter, naked and listening to Elton... 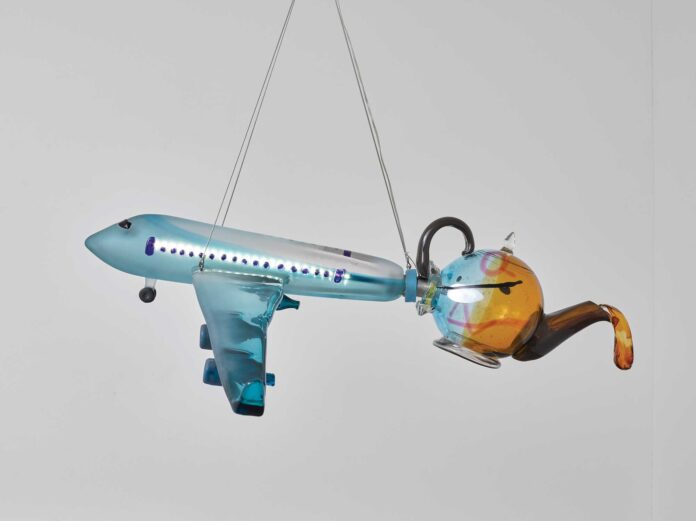 Laure Prouvost makes richly inventive, idiosyncratic mixed-media installations that combine film, sound and sculptural elements. These elaborate mise-en-scènes confound conventional formats and narratives and use a mixture of wordplay along with personal, literary and artistic references to muddy distinctions between fact and fiction. Prouvost won the Turner Prize in 2013 with an elaborate work revolving around her grandfather and Kurt Schwitters and featuring teapots made by her grandmother. At the 2019 Venice Biennale she filled the French Pavilion with a tentacular sculptural installation that included pieces made by glassblowers from Murano, live performances by magicians and a dreamlike film in which Prouvost and a motley band of travellers made an odyssey from Paris to Venice. Now she’s the first artist to be commissioned to fill the National Museum’s spectacular 2,400 sq. m Light Hall.

The Art Newspaper: How do you feel about inaugurating the National Museum of Norway’s new Light Hall?

Laure Prouvost: It’s definitely the biggest project I have done and a great honour to have this opportunity in such a special building where it’s just like you’re in the clouds. They saw the pavilion in Venice and were really keen to work together and so it’s a nice dialogue with the water of Venice and the sky of Oslo. In some ways my whole project is around this idea of levitation, of birds flying, which I was already winking towards at the end of the video in Venice.

There’s a great deal of glass and very few solid walls: does that pose a challenge?

I think it’s quite challenging to not have white walls but to have light. There’s a little thin layer of marble in between the glass and you are in a milky, cloudy sphere—it’s stunning. Of course, it’s also tricky—you can’t put anything on the wall and you either have to levitate from the floor or dig your way in or out.

What have you conceived for the space?

The project is really in response to the space. When I went to see it, I felt as if I was levitating above the clouds. So, post-pandemic, with how we have lived in the past few years where we have really felt stuck to the ground and unable to move, I really wanted to have a feeling of escapism both in mental terms, but also the idea of physical escapism, of losing the weight of your body. Could we levitate? Could we be above the clouds? Could we be closer to the birds? We have all had dreams where we tried to fly, it’s in the subconscious of humans. So there are a lot of winks to the birds and the desire of humans to fly. Also—and this was in my Venice pavilion too—there is this idea of migration, of not belonging to a state or a nation.

Do you find the prospect of filling this vast expanse daunting?

I have a tendency to try and fill a space, so it’s more about finding the right rhythm in the way that people can experience it. I really like tiny, tiny, cosy spaces as well, so it’s also about managing to create moments of intimacy within a very large picture. I am playing with a few tunnel corridors where you enter from one space to another and into different parts with paths to guide you. One is very much like you’re at the bottom of a valley, a bit dark and very physical and messy, and then in the second space it gets lighter and lighter, you’re above the sky and above the clouds. Then there are two videos with two birds where it’s as if you are under the nesting birds, being cocooned like a bird that is keeping its eggs warm. There will also be low smoke that makes you feel like you’re walking above the clouds and there are going to be fountains, very playful and joyous. And my grandma will jump from a helicopter, naked and listening to Elton John.

Wow. I know your grandmother sometimes features in your work but is she really doing this? How old is she?

Eighty-two. Yes, she always wants me to show her. She’s a sculptor—her teapots were in my Turner show and I did a piece on her dreams as well. Now she asks my uncle to take her in his helicopter and she jumps naked every weekend, or whenever she can. He attaches a rope to her and then he pulls her back in. She loves that, so she’s going to do an appearance.

This is Norway’s new National Museum. Was this national context a consideration?

I have been filming in the Ekebergparken [a sculpture park on the edge of Oslo] and think I will use some of those images, but the work is more about physical sensations and the idea of humans being very much in connection with nature and migrating like birds. We all belong somewhere, but I try to escape from this idea of nation. Keeping the imagination going, that’s what is really important.