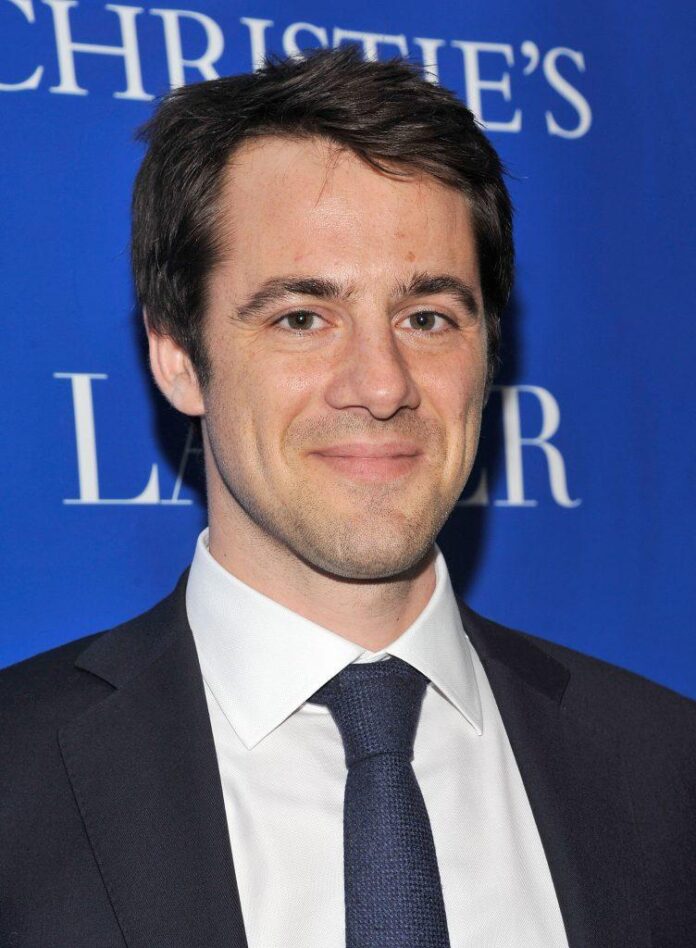 DRY SPELL FOR THE RAINMAKER?

Loïc Gouzer, whom the once deemed “the daredevil” of Christie’s auction house, has had the eyes of the art market on him for years. After he left Christie’s to strike out on his own, many took his next moves as a sign of where the market was headed. Last year, when he dove headfirst (as many did) into the crypto-sphere and began advising Beeple, it seemed as though he was teed up to bring his “rainmaker” status to the digital art landscape. Now that crypto winter has descended, though, I have a theory: he may be less of a rainmaker and more of a meteorologist. Allow me to explain.

Remember Particle? Around this time last year, Gouzer announced his fractionalized ownership venture through which he—alongside cofounders Shingo Lavine, Oscar Salazar, Philip Eytan, and Harold Eytan—was going to buy physical artworks and digitize them into 10,000 unique NFTs to sell to the . At the time, fractionalization was quite the trend, with companies such as Artemundi, Masterworks, Yieldstreet, and others all chopping up work. The first piece that Particle shredded (metaphorically speaking) was Banksy’s Love Is In The Air, which the Particle Foundation (the non-profit arm that owns the works) bought at auction for $12.9 million, and split into $1,500 NFTs (er, ). 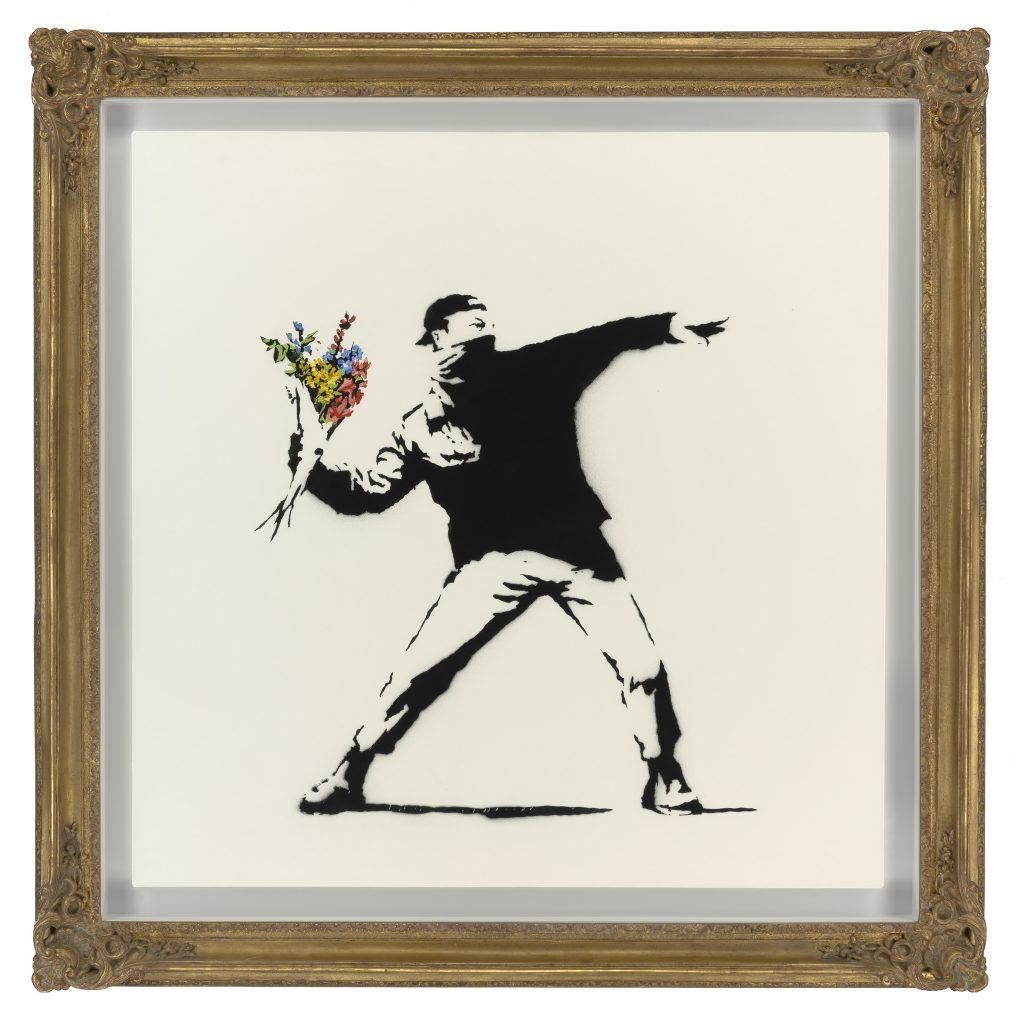 Banksy, Love is in the Air (2005), purchased at Sotheby’s this year by Particle. Courtesy of Particle.

However, as I reported back in May, the fine details of this arrangement may not work out so well for the investors, given that the Particle Foundation never intended to cash out by selling the paintings for profit.

So far this year, the only work to enter the Particle Foundation’s collection is by an NFT artist named GucciGhost. No hate (or, maybe just a ), but this strikes me as odd, given that the company set out to buy up high-end works with the idea that they’d be Robin Hooded over to people who couldn’t otherwise pay for them.

Their strategy continued to shift with the Phillips partnership, which included zero NFTs and was instead billed as an effort in “educating Particle holders and the art community on the intersection of fine art and digital art with this IRL exhibition.” Weirder still, many of the works were sourced by art advisor Charlotte Eytan, the sister of two of the co-founders, and the director of the Particle Foundation. According to Eytan, the foundation is taking half the proceeds, and splitting the rest with Phillips.

Particle declined to provide any additional details on the impetus for the sale, but TL;DR it sounds like they might be doing what Silicon Valley folks like to call a pivot—or were just in need of some excess cash flow.

Another Gouzer project once heralded as the future of the business is the app Fair Warning, which offered one artwork per week to a select group of collectors in a semi-private online auction. Notably, Fair Warning sold an untitled Basquiat for $10.8 million in the thick of the pandemic. But all’s been quiet since the auction houses reopened and physical sales returned. Sources close to Wet Paint confirmed that the app has been inactive in more than a year.

Gouzer told Wet Paint that Fair Warning is “taking a siesta” but “it will probably come back soon.” I asked what, if any, consignments were lined up, and was met with radio silence. A review on the app’s download page from April of 2021 reads, “After a number of invasive questions and two rounds of ‘we will try to decide if we’re going to give you an account,’ I still don’t have an account. I don’t think this app is for real!” (It’s worth noting that one of the only three reviews was from Loïc himself, who wrote, “best app of all time.”)

On the topic of consignments though, I  also catch wind that Gouzer offered up Liu Wei painting to Christie’s this November, which wound up being bought in. Gouzer denies that he was the consignor, but I have it on good authority that he offered it for sale to the auction house, representing the piece as though it was his, which sounds like a consignment to me.

Whether he’s a rainmaker or meteorologist, if Gouzer thinks it’s time to sell, you might want to prepare for stormy weather ahead.

A CORRECTION TO THE DOWNFALL OF DOWNS & ROSS

Last week’s Wet Paint investigated a trail of vague statements regarding Alexander Ross‘s decision to step away from his gallery Downs & Ross, the Lower East Side space that launched in 2017 and reps buzzy artists such as Jiang Cheng, Ivy Haldeman, and Rute Merk. But I failed to get the full story on the situation that led to his exit from the gallery.

After speaking to Ross, his gallery co-founder and former romantic partner Tara Downs, and several other people, I reported that the dealer was burnt out, with his mental health hanging by a thread, and thus he excused himself to go find the proper healthcare he needed. I felt sympathetic for the guy; it can be hard to talk about these issues—especially for men—and I commended his decision to put his health first.

“It was a personal decision,” Downs told me from their booth at NADA. “Alex has to take care of himself, and everything else sorts itself out from there.”

Both Ross and Downs denied that there was an inciting incident that led to Ross leaving, but an email leaked to Wet Paint this week confirms that, in fact, several instances of violent domestic abuse from Ross against a romantic partner (not Tara Downs, to be clear) were brought to Downs’s attention prior to the announcement. The email, sent by anonymous concerned parties on November 17 and viewed by Wet Paint, also included a demand for Ross to no longer work with the space and for his name to be removed from the gallery.

Downs responded to the email the same day (also viewed by Wet Paint). “At my request Alex Ross has handed in his resignation at Downs & Ross and he is no longer with the business or in contact with our artists and staff members. A change in name will follow,” she wrote.

That response wasn’t altogether true. As I previously reported, Ross continued to remotely execute sales for their offering in Miami at NADA. As of this morning, the gallery maintains its name of Downs & Ross.

I spoke with both Downs and Ross about the new information that came my way. Ross, over a series of several messages, did not deny the abuse, and continued to emphasize that he would just like to “heal and atone.” As for Downs, she said that her “personal partnership [with Ross] ended a year ago after our romantic break-up, upon which we chose to remain professional in our correspondence.” She declined to state anything on the record about the allegations of abuse.

In regards to Ross’s continued involvement with the gallery, she informed me that “all legal and financial matters are being resolved on an as soon as possible schedule,” and that upon the new year, she’ll be starting her own shop called Tara Downs Gallery.

Collector Scott Lorinsky has donated his Agosto Machado sculpture Shrine (2022) to the Museum of Modern Art … Larrie’s final show is opening this week at their 27 Orchard Street location … The Swiss Institute is teaming up with some pretty great artists for a series of watches to be auctioned off with Phillips to benefit the institute (if anyone would like to snag me the Matt Copson time piece, be my guest!) … Josh Brolin was one of the first to nab one of the new Scott Kahn monographs from Almine Rech … The pay-to-play Agora Gallery is hiring a sales assistant … Anna Wintour was a notably tipper at Balthazar, according to Keith McNally, and you know that guy is honest about how his staff gets treated … TEFAF has tapped Bart Drenth as their new global managing director … Crypto-fraudster Caroline Ellison was maybe spotted at a Soho coffee shop this week …

PLEASE CONFIRM: A user claims that they spotted Caroline Ellison at Ground Support Coffee on West Broad in SoHo Manhattan at 8:15 AM. This would mean she is not in Hong Kong and is in NY not in custody. pic.twitter.com/QUduYO9GfZ 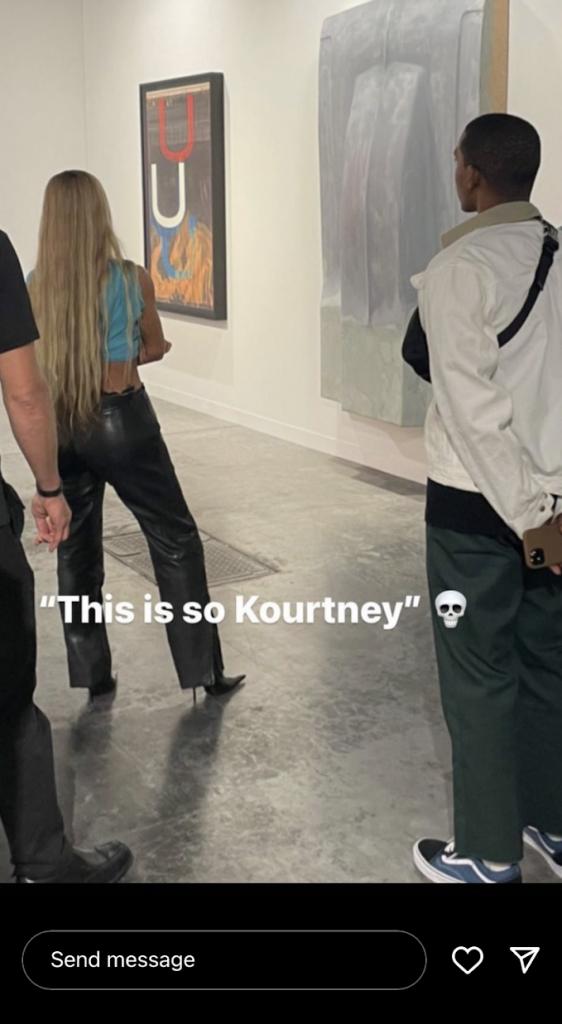 *** Kim Kardashian walking the halls of Art Basel Miami Beach this weekend with her advisor Meredith Darrow, pronouncing “this is so Kourtney” about a either a Wade Guyton piece or a Richard Prince sculpture, depending on where Kim’s eyes are pointed in that photo (sound off in my inbox? My bet is that it’s the Prince) *** Jerry Saltz took to Instagram (where else?) to denounce some of the decoy accounts that pretend to be him and calling his followers to action to block them as he does, which is funny, because just a few weeks ago he told me that he didn’t know how to block people on social media *** Michelle Williams, Nicholas Braun, Glenn Ligon, and Thelma Golden at Creative Time‘s gala honoring Charles Gaines *** Hunter Biden dropped by Lisa Schiff’s SFA Advisory opening of drawings by Lisa Edelstein (aka Dr. Cuddy from House) *** 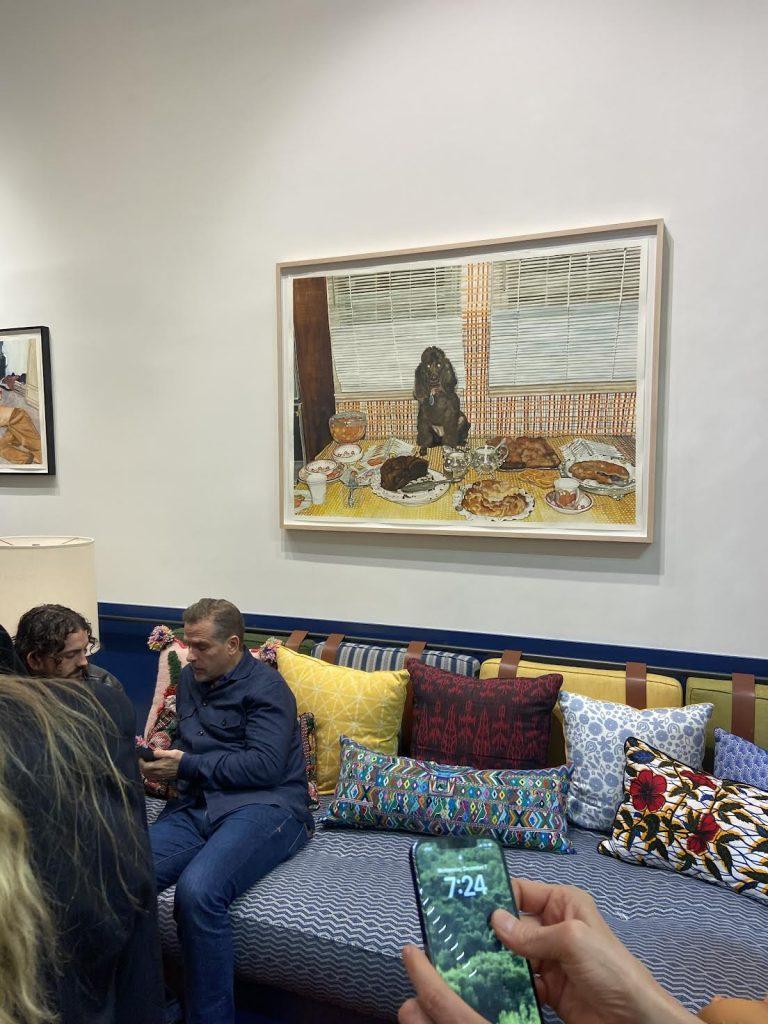 Anecdotally, taking this sly photo of Hunter Biden was infinitely easier than taking a sly photo of Adam Driver, who had security that immediately hounded me. No secret service objected to Wet Paint snagging this photo in Lisa Schiff’s office.

Phew, we got through another Miami. Personally I am very glad to be back home in New York, and not in my floor-to-ceiling linoleum Airbnb in North Beach (echem, any hospitality PRs want to hook it up next year?). Horrible Miami sleeping arrangements are part of the fun, though, as many of you seem to have gone through this rite-of-passage as well.

Lisa Cooley wrote in, “There used to be a deeply depressing Days Inn on Collins Park that may have also been the worst hotel I’ve ever stayed in—anywhere, not just in Miami Beach. But dealers 15-20 years ago loved it because it was dirt cheap and within stumbling distance of Art Positions (and massive nightly parties) when Positions was shipping containers on the beach. But I’m not sure if that made up for the stained carpet, or the stained comforters or the sallow lighting. Hilariously, Google Maps suggests that it’s now a Bulgari hotel. Honorable mention for the “sighing” elevators at the Deauville, RIP.”

Up next: Write in your response to [email protected]