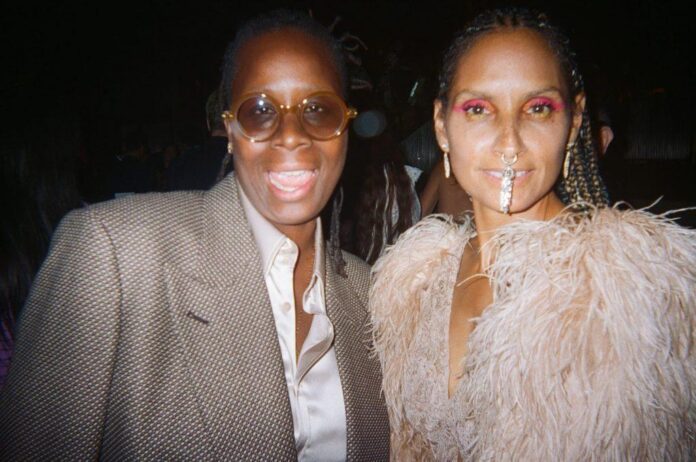 ALL IS FAIR IN LOVE AND COMMISSION RATES

The sad, previously unreported news that the beloved art-world power couple broke up in 2020 after a decade together, published just over a week ago in , was confirmed by the duo, who told the publication: “We ended our long-term personal relationship but remain committed to completing our current projects as Deux Femmes Noires.”

For the uninitiated, the pair, who began dating in 2011, run Deux Femmes Noires as a platform for queer artists of color. Among their joint projects is a new show up now at Parrish Art Museum in Water Mill, New York, featuring work by Torkwase Dyson, Kennedy Yanko, and Leilah Babirye.

Curating for nonprofits is one thing; their business relationship is another. Because, as Wet Paint can exclusively reveal, their financial arrangement was not only good for Thomas, but also for Chevremont, who earned a handsome 20 percent sales cut on commissioned works she was involved in. (Another source close to the matter also independently confirmed to Wet Paint that the 20 percent commission structure for Chevremont was in place.)

Here’s the breakdown. According to a 2020 spreadsheet from Thomas’s studio leaked to Wet Paint, an 80-by-60-inch painting—the smallest commissioned work in the document—would cost around $14,000 to produce. The price, however, is a markup: $580,000. 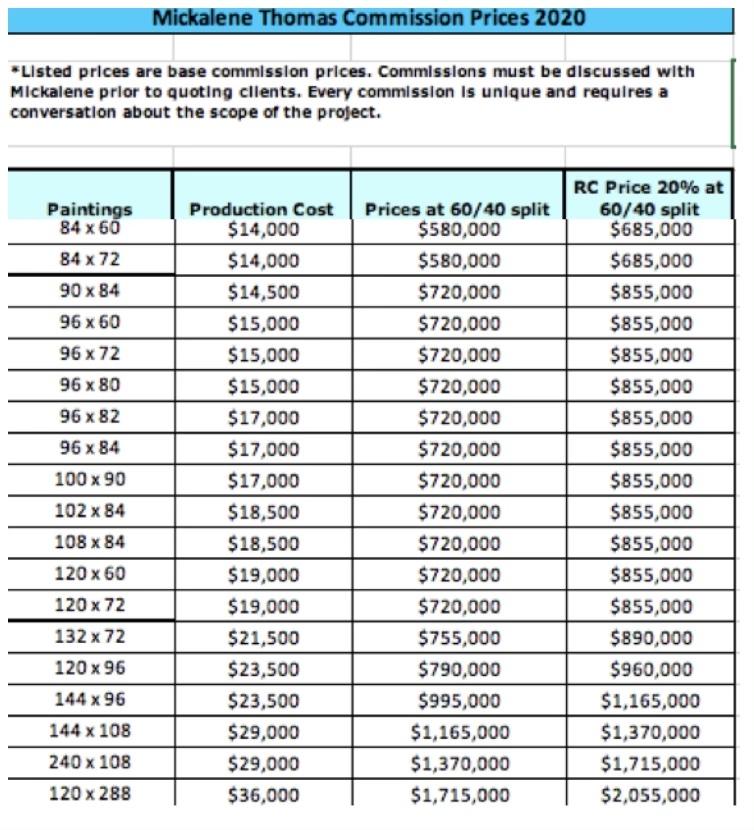 A 2020 chart leaked to Artnet News detailing prices for commissioned works by Mickalene Thomas. The column at the far right, labelled “RC Price 20% at 60/40 split,” details prices that include a commission for Thomas’s former romantic partner, Racquel Chevremont.

The source who provided Wet Paint with the document said they were given the impression that the up charge for artworks Chevremont was involved with accounted for a manager’s fee, which is consistent with their understanding of the relationship between Thomas and Chevremont. Which is to say, Chevremont wasn’t making passive income. According to the source, Chevremont effectively filled the role of Thomas’s business representative, and it’s not uncommon practice for people in that role to get a slice of the pie.

Contacted for comment, a representative for Thomas told Artnet News that the document was “an outdated internal studio working document that was used as a pricing guideline for special commissioned works, not for retail paintings. The price differential reflects an increase from the base pricing when Racquel is depicted in the painting, as that body of work is rarer.”

The spokesperson added: “It is a single page taken out of context from a multiple page document that applied to just a single body of work. In general, the pricing of Mickalene’s works differs based on subject matter, medium and size.”

Chevremont, for her part, also said the pricier works depicted her. Yet in a tantalizing detail, she added: “However, I have not received any portion of those sales to date.” Asked if she was still Thomas’s financial partner, she said: “I am no longer acting as her business manager, we do still have business together. “

No matter the exact reason for the fee, Chevremont is (was?) a frequent collaborator and muse to Thomas, posing for some of her most beloved collages and photographs. But those days appear to be over. Although neither Thomas nor Chevremont would comment on whether their business arrangement was through, did report that they were splitting not only only romantically, but professionally, too.

As of now, after departing from Lehmann Maupin about three years ago, Thomas is listed as “affiliated with” LGDR on the gallery’s website. 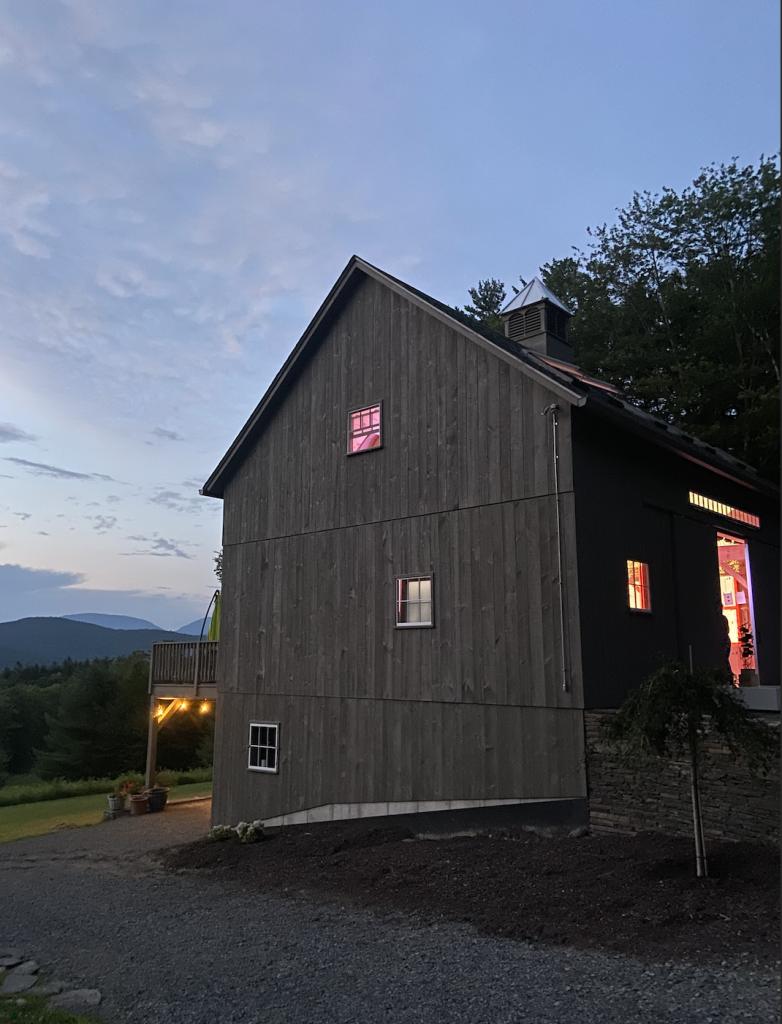 The barn at The Swimming Hole.

Somewhere between the old-school showiness of the Hamptons and the quaintness of the new scene up in Maine is Upstate New York’s art scene. Last weekend, dealers and art-lovers flocked up yonder for the annual Upstate Art Weekend, hosted by Helen Toomer. And the overall vibe was calm and idyllic.

For me, the weekend began with the harsh realization that being without a car would be an immense challenge. As most everyone I knew made their way to Saugerties for Eric Oglander’s opening of understated, elemental sculptural works at Swivel Gallery, I had the distinct pleasure of chilling out in a calmer setting at the Swimming Hole, a new artist residency program deep in the Catskill mountains, named for the pristine swimming hole on its campus.

“I bought it during lockdown,” its owner, Deb Johnson, who is also a professor at Pratt Institute, told me on the three-mile drive from the road to where the house is tucked away. “I liked that I could just be away from all that.”

Johnson, who started the residency program about a year ago, was hosting a slate of artists during my visit, among them Nancy Davidson, Rick Klauber, David Provan, Rebecca Welz, Lyn Godley, and Sky Pape, each of whom had one week to create and mount a group show centered on the theme of birds.

“We’ve been having the most interesting conversations,” Welz, who contributed wire sculptures that cast elaborate shadows on the barn’s wall, told me. “It can be such a solitary existence, being an artist. It’s been really fun to see how each of us reacts to having to work together.” (As she told me this, I began to imagine the world’s most gentle reality television show taking place, with all of these artists politely disagreeing about the placement of delicate paper cranes.) 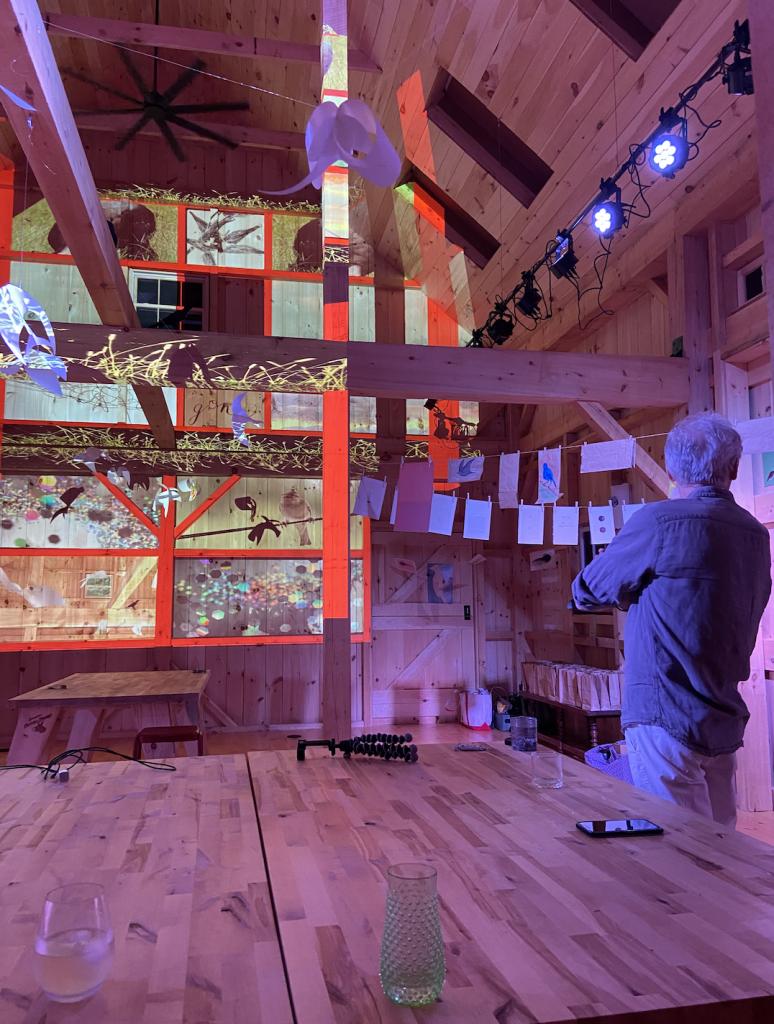 After a deeply soothing slumber in the barn (the show included a particularly hypnotic audio component), I was whisked off the premises by a friend with a car about 40 minutes southeast to Port Ewen to see a group show in a derelict post office building owned by artist Kate Steciw.

Inside, arts nonprofit Noise For Now’s group show, “Bless This Mess,” included works by Charlotte Hallberg, Letha Wilson, Amber Renaye, and Josh Reames. It was almost oppressively wholesome to watch a child pick up and attempt to eat a ceramic deviled egg, and a group of young artist parents all laughing together. 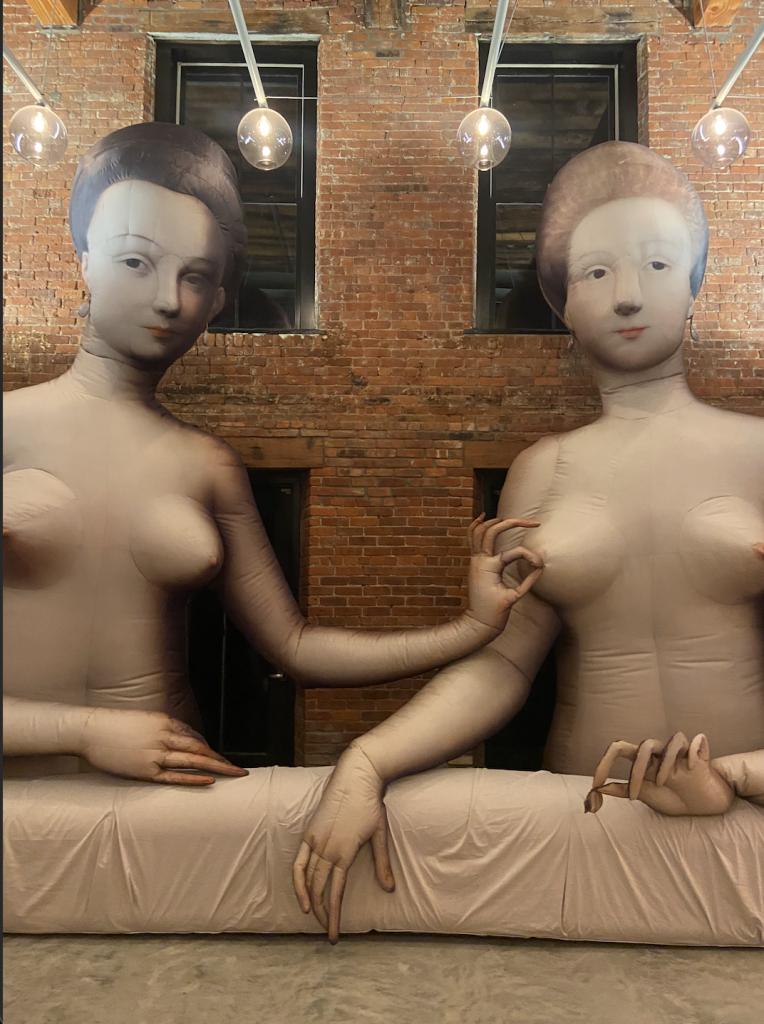 I mean, look at this thing!

The rest of the day was a blur of pool gatherings and group shows, all dwindling down into a party at Foreland, the mixed-use arts space in an old factory just west of the Hudson River. I missed the open studios during the day, but was privy to a DJ set by Tschabalala Self, who played “Gasolina” by Daddy Yankee to a crowd that included artists such as Lyle Ashton Harris, Sky Hopinka, and Steve Locke.

The crowd milled around a giant inflatable version of the mysterious and beloved painting , which was tied with the sunset over the river for most Instagrammed image of the weekend.

… Olmo Schnabel is continuing his career in the movie-making business with a new film currently in production … Allison Katz is no longer listed on Luhring Augustine’s roster … Broadway Gallery is expanding into the space next door, and is set to reopen in early September with a Jamilah Sabur solo show … Ugo Rondinone’s beloved site-specific sculpture is getting a month-long pressure-wash out in the dusty hills of Nevada (me next?) … The Dallas Museum of Art has tapped Gowri Natarajan Sharma as president of the board … Lower East Side frat haven Hair of the Dog was overrun with downtown scenesters for the premiere of Blaketheman1000’s new song about Dean Kissick, for which the bar shut off the Mets–Yankees Subway Series game to the dismay of many … 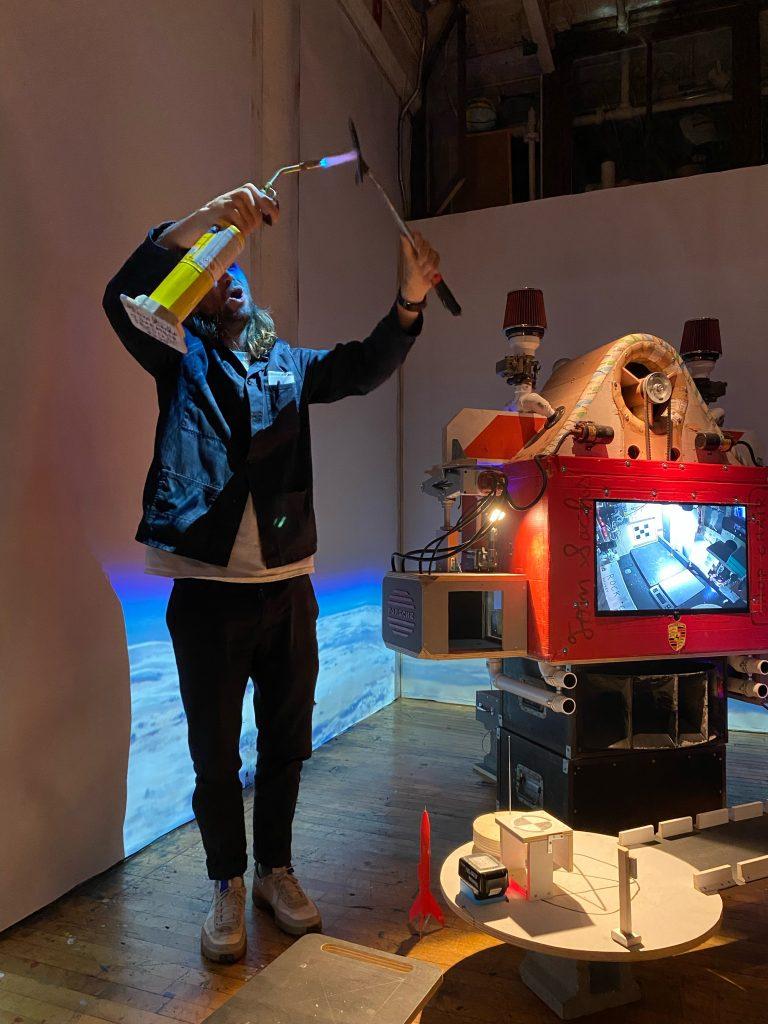 I’ve seen some bad behavior at art galleries before, including (but not limited to) a sculpture getting shattered, drugs being openly consumed, and an outright brawl. I seem not to be alone.

Curator Lolita Cros has a story that I’m sure will hit home with many females in the art world: “For many years, every time I had a show up, an old man would always come up to me with disdain at the opening asking if he could speak to my boss, ‘Lolita Cros.’”

Sigh. Another curator, Brooke Wise, detailed that a collector stole a small sculpture from a show “as a joke,” only to return it to her unceremoniously. Yikes!

My next question: Which artist is the best chef? Email your responses to [email protected]