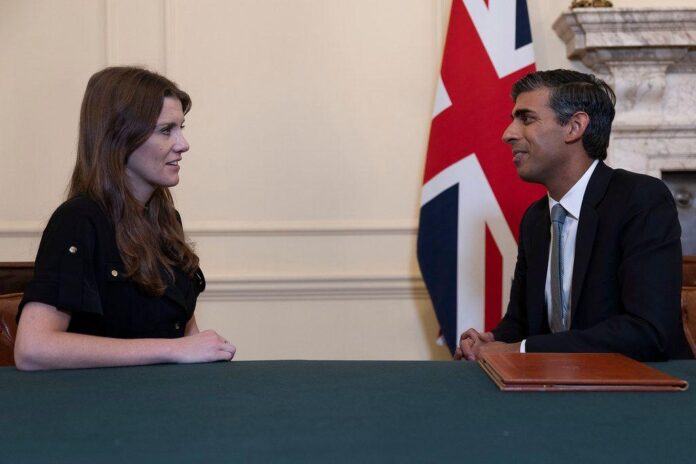 Despite the current chaos of the UK’s revolving politics, our latest prime minister—Rishi Sunak—has kept Michelle Donelan on as culture secretary. There’s no escaping the fact that she has a heaving inbox mind. For a start, “culture” isn’t her only remit—her role includes a few other biggies: digital, media and sport. Within culture alone, her priorities include keeping the lights on in UK museums through an energy crisis.

Among the art trade, Donelan has been broadly welcomed—or at least is more of an unknown than some of her unwanted predecessors—but is it even worth the hampered art market trying to get a look in? There is one overriding issue at the moment: the additional paperwork, logistics and tariffs brought on by leaving the European Union. Donelan, meanwhile, is part of a government that is stubbornly proud of “getting Brexit done”. But like it or not, these issues are dragging art businesses down. Hugo Barclay, the director of the UK’s three Affordable Art Fairs, says that overseas attendance is down 30% since the UK left the EU. He appeals to the government for a return to frictionless trade, “one of the core values of true conservatism,” he says.

Why does the art market’s international appeal matter? Well even before Brexit, there was plenty of trade lobbying on its behalf because, says Anthony Browne, the chairman of the British Art Market Federation (BAMF), “It is something that we are good at.” Indeed, the UK has long shuffled between the second or third place in the global art sales league table—not bad for a small island.

Its art businesses have positive knock-on effects beyond the taxes and levies that direct trade brings in. In an Arts Economics report for BAMF in 2017, Clare McAndrew found that there were 7,580 art businesses providing 41,700 “knowledge-intensive and gender-balanced jobs” in the UK. A further 94,710 “ancillary” jobs—through events and specialty skills such as restoration and conservation—came out of an estimated £3.3bn spent by the auction and gallery industries. Tourism also plays a part—as Browne puts it, “The art market is a niche, slightly glamorous industry.”

The good news is that lobbying for the market involves fiscal issues such as import VAT reforms, which can be directed at government officials in other departments. But the Treasury and trade teams also have a lot going on just now and the optics are difficult in a country struggling with a cost-of-living crisis—in part because of the art market’s glamorous sheen. Sunak’s appearance at this year’s VIP opening at Frieze London likely won’t help art’s association with the wealthy “liberal elite”, a lazy culture war label that will take some time to erase.

Meanwhile, however good a hearing Browne, Barclay and others might get, they could quickly be back to square one during these turbulent times—Donelan is the UK’s seventh culture secretary in six years. It is very early days into a new government, and indeed a new sovereignty. The best we can hope for is that, one day, the art market gets lumped in with other struggling cross-border industries and business-as-it-was can resume within some form of pre-Brexit arrangement. And hopefully before much more damage is done.

Bulgari Celebrates World Children’s Day With Digital Collages, Plenty of Rainbows, and a Pledge to Donate 10 Percent of Its U.S. Sales to Arts...