Home News Jeopardy’s ‘Tournament of Champions’ Was Filled With Clues About Art. See How... 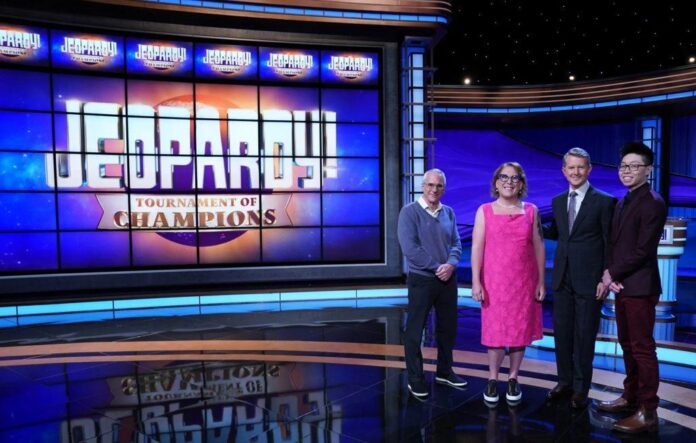 Monday marked the conclusion of a thrilling edition of the  “Tournament of Champions,” with the victory of Oakland’s Amy Schneider, who prevailed over competitors Andrew He and Sam Buttrey. And the clue that put her on the path to victory was a Daily Double category dedicated to painting.

Schneider and He came into the game, the fifth in a best-of-seven affair, tied at two wins a piece, with Buttrey yet to have notched a victory. Schneider had taken games two and four, with He reigning supreme in the first and third contests, largely on the strength of aggressive wagering.

Schneider and He were both poised to take the championship with a third and decisive victory on Friday, and it seemed within He’s grasp when he hit two consecutive Daily Doubles. At $5,000, He doubled his score to $10,000 by identifying Toni Morrison’s debut novel, .

The next clue was the second and final Daily Double of the round, and He once again went all in—a strategy that had proved instrumental to his tournament run up to that point.

But He finally hit on a clue he didn’t know in the category “Paint Samples,” dropping his score from a potential $20,000 to zero, and making way for Schneider to lock up the title with a third victory, cementing her place among the “Tournament of Champions” pantheon of winners.

The clue that stumped He was: “Don’t try to pet this cat in a tricky canvas by Louis-Leopold Boilly, who invented this French term.” Think you know the answer? Test your knowledge below, along with a slew over other art clues that appeared throughout the tournament.

Highlight the text in black to read the answers and see how you would have stacked up to the competition. (On an iPhone, highlight and select “look up.”) 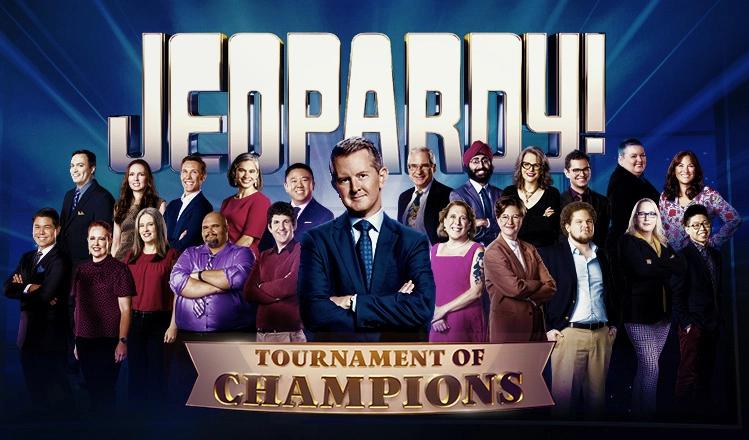 $400 clue: “In 2004 armed robbers stole two of this artist’s best-known paintings from his museum in Oslo”

$1,600 clue: “In 1979 this architect famous for his ‘Glass House’ in Connecticut was the first recipient of the Pritzker Prize”

$1,200 clue: “Don’t try to pet this cat in a tricky canvas by Louis-Leopold Boilly, who invented this French term”

$600 clue: “A depiction of Nike discovered on a Greek island in 1863, this statue is thought to commemorate a sea battle”

$1,000 clue “I was a big fan of the late Stephen Sondheim and I am honored to have originated the role of the artist Seurat in this Jame Lapine-Sondheim musical that was inspired by a painting”

$800 clue: “A man and a woman hold each other close in by this French painter”

$1,200 clue: “This artist donated the proceeds from her portrait of Breonna Taylor to fund college scholarships” 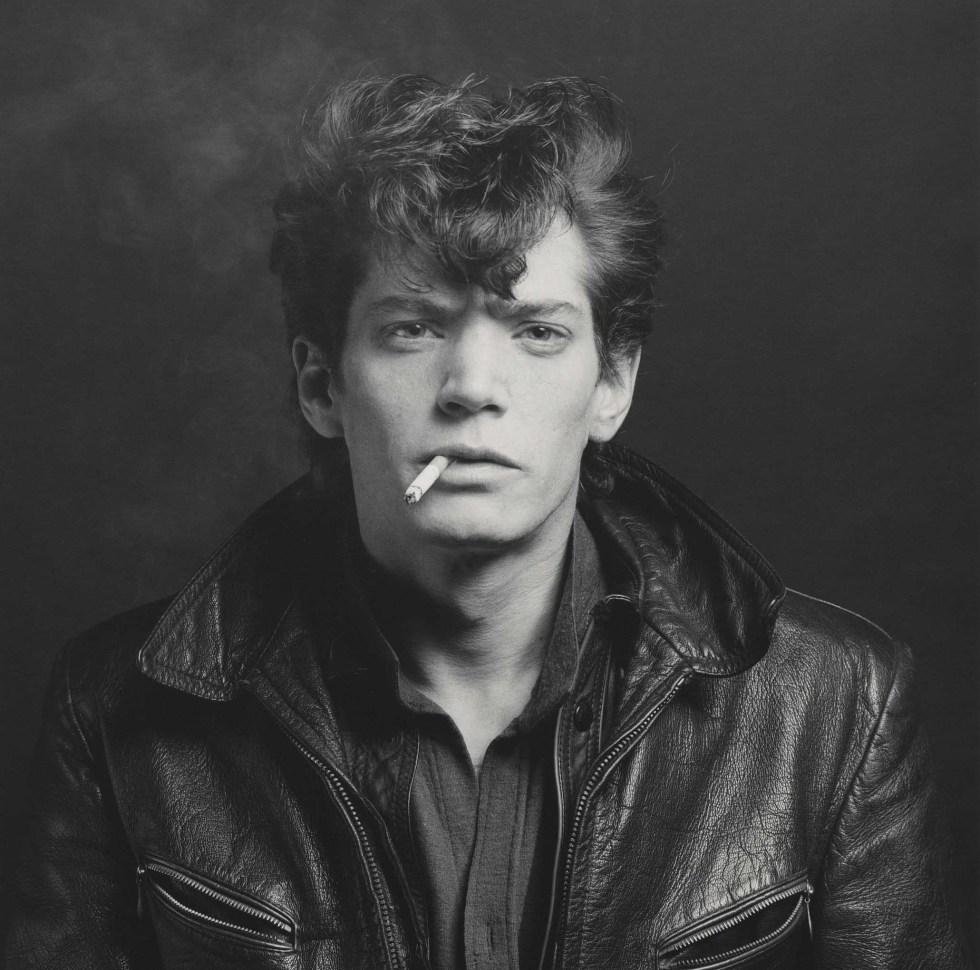 $1,600 clue: “Here’s a portrait of this provocative photographer who was also a great art subject”

$2,000 clue: “This contemporary Chinese artist and activist made the film , about displaced people and refugees”

$800 clue: “Not just for donuts, this pottery finisher made from a powder can give your final creation a lovely sheen”

$1,000 clue: Thousands of years old, large geoglyphs representing plants and animals can be seen 15 miles northwest of this Peruvian city

$2,000 clue: “A Florida educator and college founder, she is the first African American to represent a state in Statuary Hall”

Final Jeopardy: “Sabena Airlines commissioned a painting by this artist, , a bird whose body is filled with clouds in a blue sky”

Final Jeopardy: “A Catholic charity called Caritas Rome is the beneficiary of money collected from here, over the years averaging about $3,500 daily”

$400 clue: “Not far from the New York Stock Exchange is Arturo di Modica’s over-three-and-a-half-ton sculpture of a charging this”

$800 clue: “Louise Bourgeois famously created giant sculptures of these creatures partly as an ode to her mother, who was a weaver”

$1,200 clue: “The little boy fountain sculpture is a symbol of this Belgian city’s spirit and sense of humor 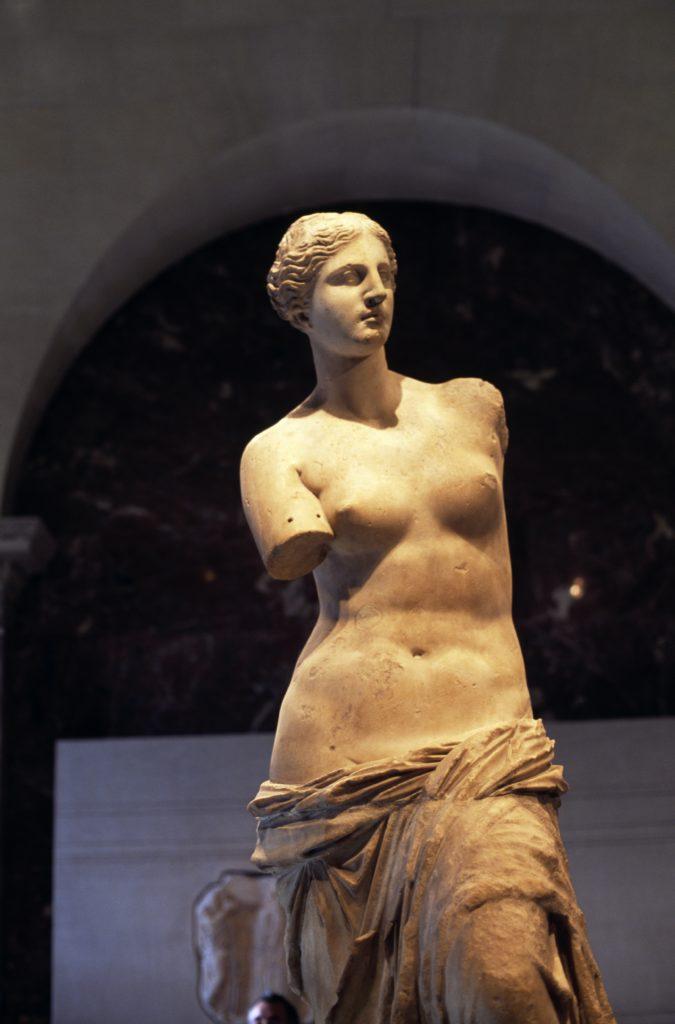 $1,600 clue: “After its discovery and purchase by a French ambassador, it was presented to Louis XVIII who donated it to the Louvre”

$2,000 clue: “Rodin’s sculpture  this city was commissioned to commemorate an event during the Hundred Years’ War”

$800 clue: “Park Güell, with unique architectural features by Antoni Gaudí, is a must see in this Spanish city”

$2,000 clue: “There’s a statue in Central Park of this heroic sled dog for helping run a diphtheria antitoxin to remote Alaskans in 1925”

$400 clue: “Bracelets featuring butterflies inlaid with gems, circa 2,500 B.C.E., are made from this metal, at that time, more precious than gold” 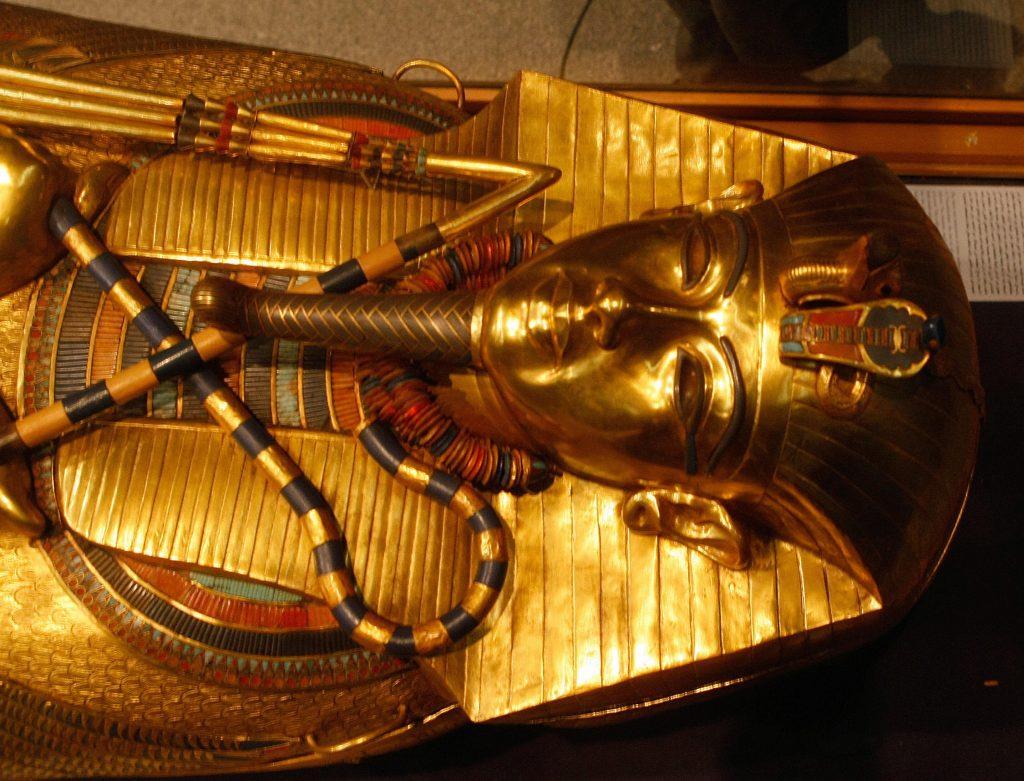 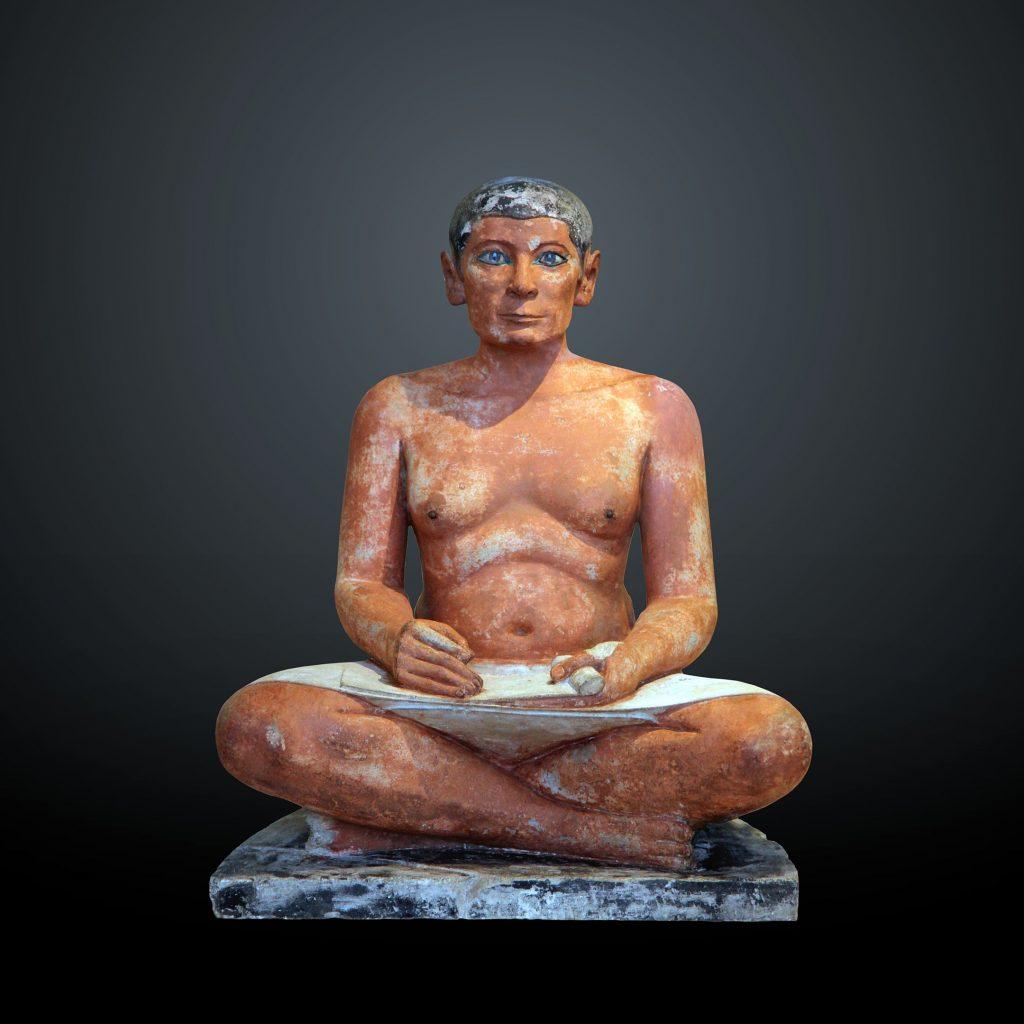 $1,200 clue: “Looking ready to begin, a statue of a scribe from about 2400 B.C.E. holds a representation of a scroll of this material in his lap” 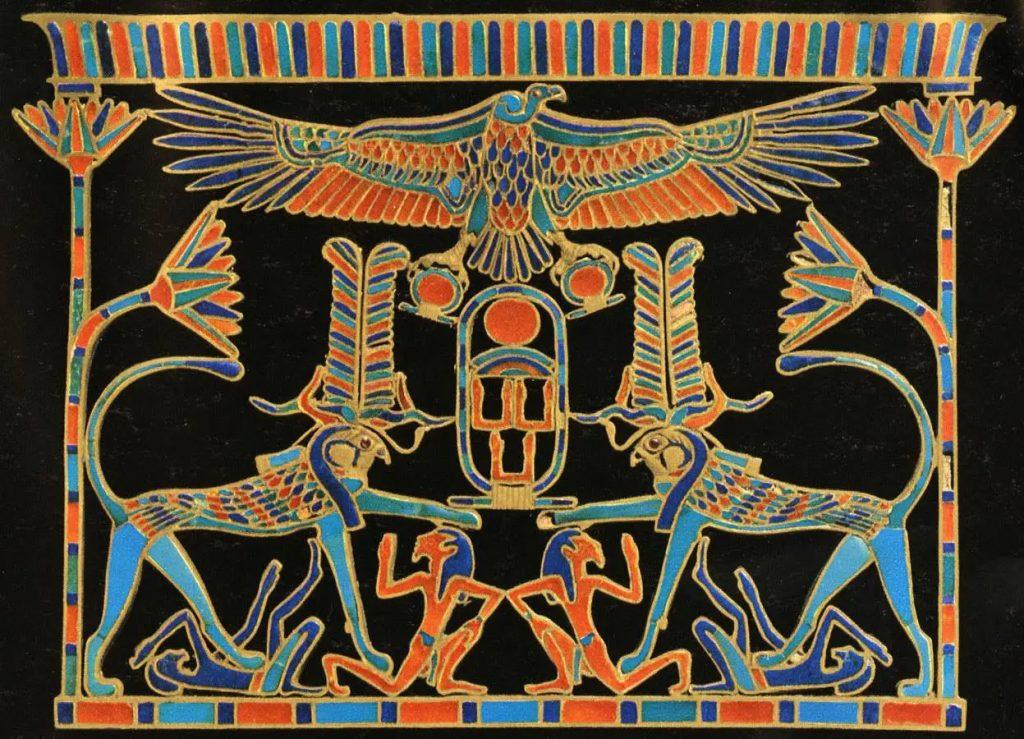 A pendant from the tomb of Princess Mereret. Middle Kingdom, 12th Dynasty (ca. 1991–1786 B.C.E.) From the Funerary Complex of Senusret III, Tomb of Mereret, Dahshur. Collection of the Egyptian Museum, Cairo.

$1,600 clue: “A pendant from the tomb of Princess Mereret from around 1800 B.C. features two of these, a fierce hybrid of a raptor and lion” 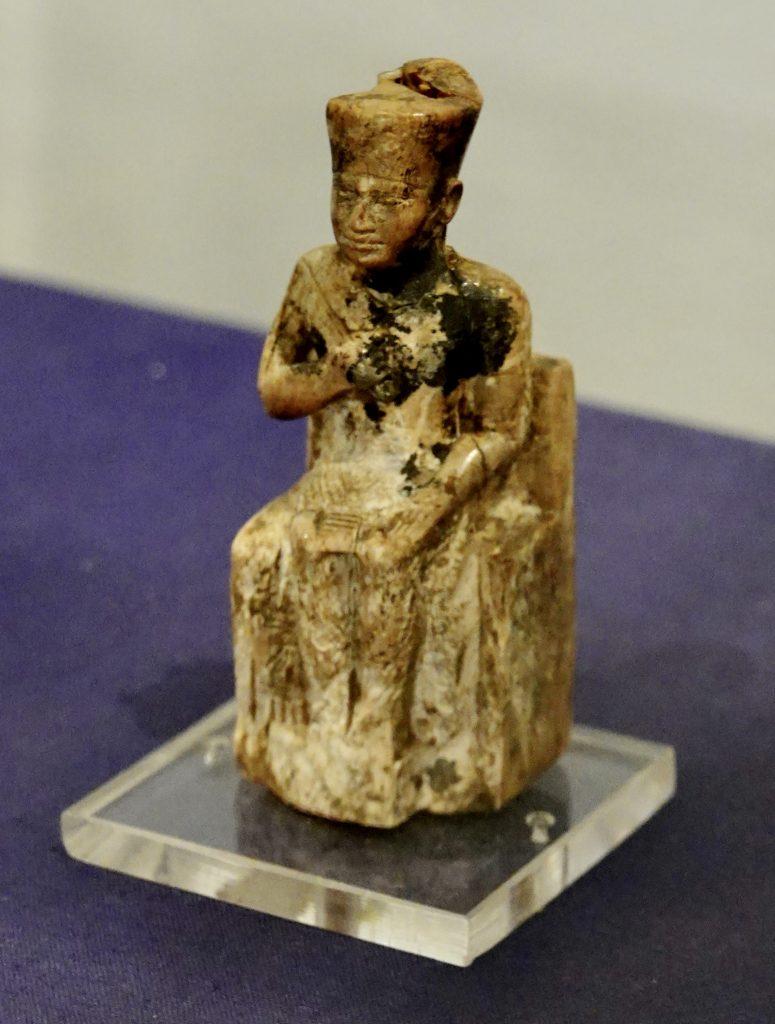 $2,000 clue: “He was laid to rest in the grandest of the pyramids, but a tiny ivory figurine is the only complete sculpture known of this pharaoh”

$600 clue: “Nan, sister of this painter, is next to a pitchfork-wielding gent in “

October 17, Category: Trying to Get Some Works Done

$1,000 clue: “Adventurous artists are described by this hyphenated French word, which used to refer to the leading body of an army”