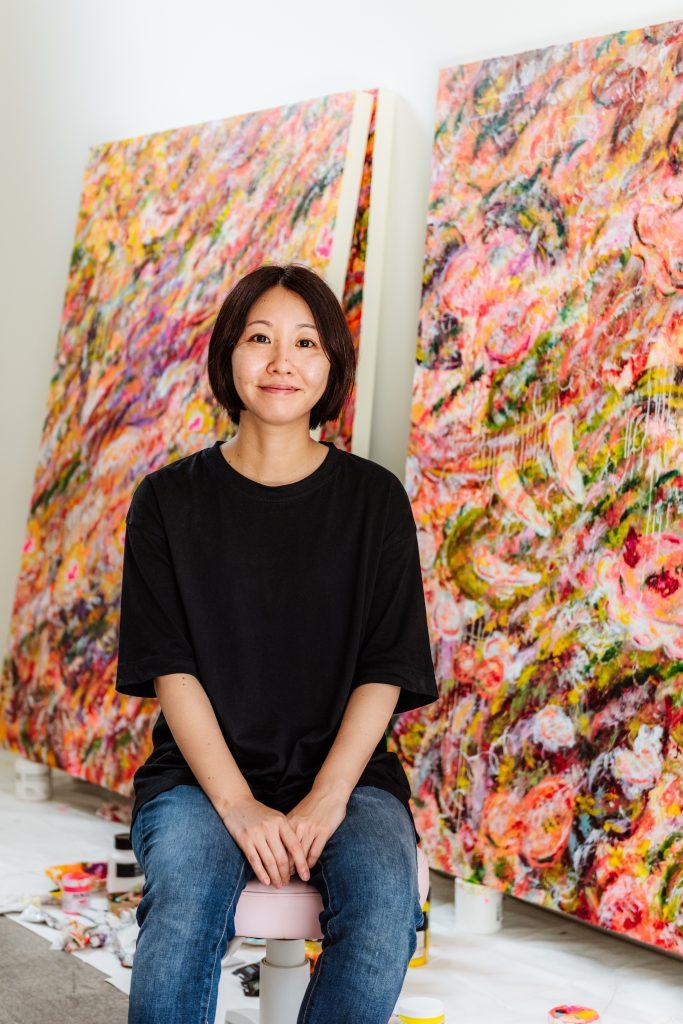 The pale, porcelain skin of Ayako Rokkaku’s petite hands brightens the navy blue ceramic tea cup held in her palms. For nearly two decades, the artist has used her hands instead of brushes, dipping her fingers into the paint and applying the color directly onto the canvas. The prolonged exposure to acrylic and oil paint, however, seems to have had little impact on her skin.

Rokkaku is surprised by the attention her skin is receiving, casually stating that she applies only normal hand cream like most east Asian women do, rather than subscribing to any special beauty treatments. In fact, it was only around three years ago that she began to consider the impact of potential toxins in the paint.

Subsequently, she now wears gloves when she works on large areas of a canvas, but she still insists on painting the fine, intricate details with her fingertips. 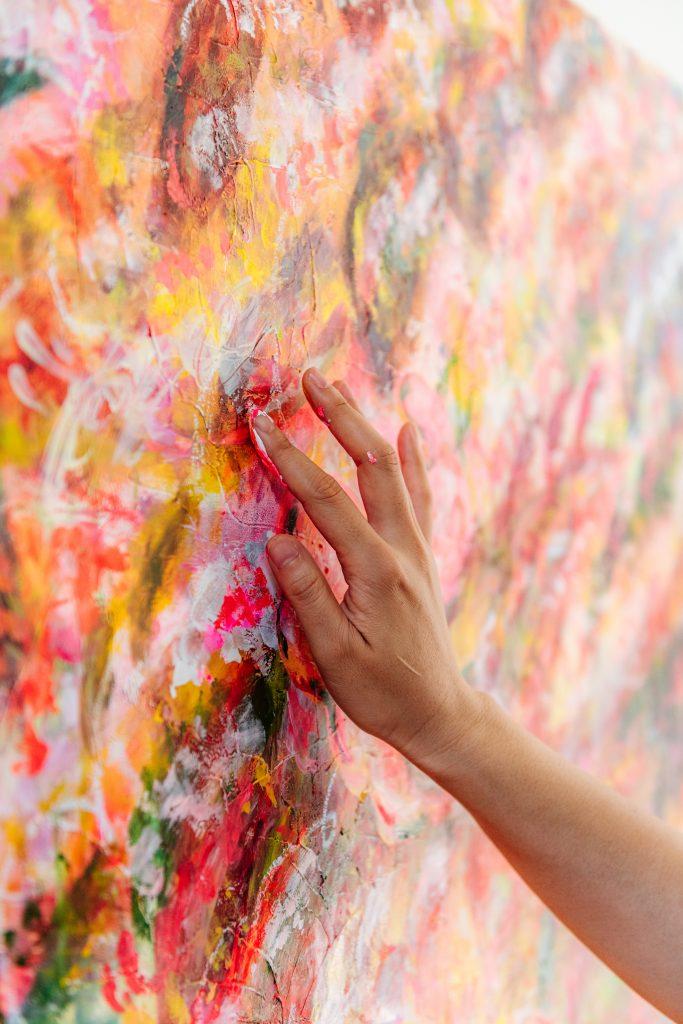 “It’s the energy,” Rokkaku tells Artnet News about her finger paintings during an interview in London. “When I first started painting in my studio, I was painting just for myself. But when people tell me how happy they feel when they hang my paintings in their homes, it makes me feel happier. I want to share this positive energy, and paintings can just be a form of the existence of energy.”

Those in the U.K. capital may get a chance to experience the energy that Rokkaku describes. The artist is in town for a live painting performance on Wednesday (November 23) with art platform Avant Arte, during which she will be working on a 150 cm x 200 cm canvas at the historic Old Sessions House.

The performance will be live-streamed on Avant Arte’s website, and the platform will be selling editioned, 80 cm x 60 cm prints of the new work for 24 hours, priced at €500 ($514). There is no limit to the number of prints that will be made available during the timeframe.

The €500 price tag is certainly appealing, especially when the market for Rokkaku’s cute, dreamy paintings has exploded in recent years.

Three auction records have been set this year, bringing her prices above the $1 million benchmark, according to data from Artnet Price Database. The second and third highest prices were achieved at a Christie’s Hong Kong sale in May and a Phillips Hong Kong sale in June, respectively. A record for the artist was set in July at an SBI Art Auction in Rokkaku’s native Japan, when her 2017 untitled painting sold for over $1.3 million—more than double its high pre-sale estimate. She also made her London auction debut at a Phillips evening sale in October. 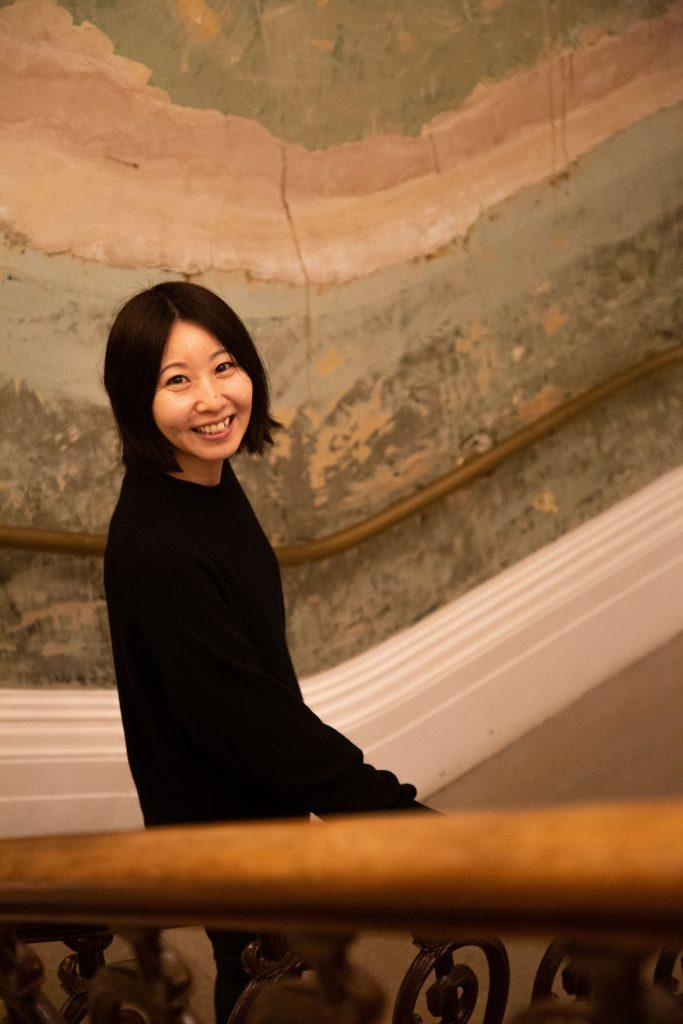 These new auction records obviously have contributed to Rokkaku’s overall success in the art market. According to Artnet Price Database, she is currently the sixth best-selling Japanese artist of all time, with a total sales value of $63.8 million achieved from the 825 lots sold out of the 891 offered at auctions as of November 2. The top five Japanese artists are: Yayoi Kusama, Yoshitomo Nara, Takashi Murakami, Kazuo Shiraga, and Hiroshi Sugimoto. At 40 years old, Rokkaku is also the youngest of the top 50 best-selling Japanese artists in the database.

These figures, however, sounded like an alien language to Rokkaku, who was flabbergasted to learn just how big a market success she is.

“This is my first time hearing all this,” the wide-eyed artist says via her interpreter, Tomoko Okamoto, the director of Gallery Target, her dealer in Japan. “It feels so weird, like a mystery. I feel that there’s a huge distance between me and the art market. I feel that these auction records do not reflect me or my work properly.”

Born in 1982 in Chiba, just east of Tokyo, the self-taught artist began to garner attention after winning the Akio Goto Prize at Takashi Murakami’s Geisai#9 art fair in 2006. Her work—characterized by the use of warm colors to depict cute, wide-eyed characters that give off an overall ethereal vibe—has earned her a huge following, particularly among younger audiences across Asia.

The artist notes that her artistic expression is a natural blend of two of her major influences: abstract paintings from the West and Japan’s culture.

“When I first saw pictures of Jackson Pollock’s abstract paintings in textbooks, I could feel the energy,” Rokkaku recalls. “Later on, I saw a lot of these abstract paintings, such as those by Cy Twombly, when I visited many museums in the U.S.”

“These abstract paintings radiate a lot of energy, as I envisioned the body movements of these artists when they created their work. They made me realize that paintings do not necessarily have to tell a story or a narrative. They can just be pure existence of energy.” 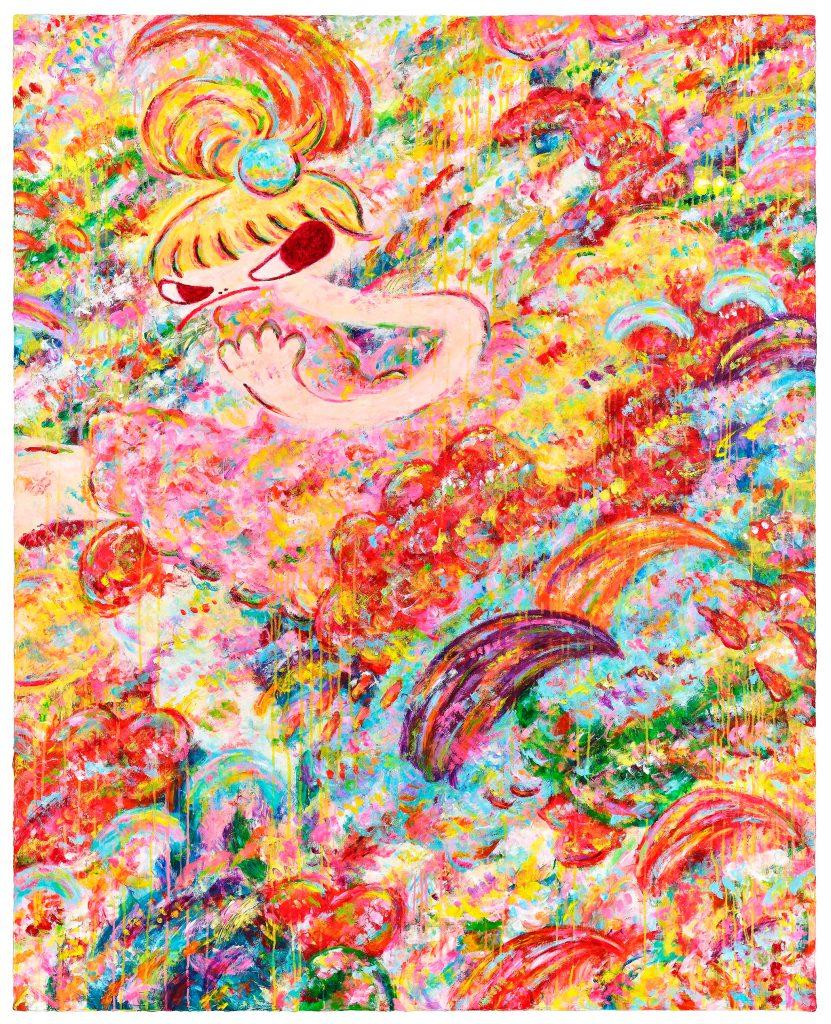 The idea of existence fits with culture. Kawaii is often translated as “cute,” in English, and is associated with characters and objects from Miffy to Hello Kitty. But it has a much more expansive meaning, Rokkaku explains. “It is not just about the visuals. It can be about feelings and existence,” she says.

At the beginning of her artistic journey, Rokkaku painted characters and abstract images separately. But as time went on, she began blending the two, with a cute character submerged in a vast, abstract background.

The spontaneity of live painting plays a key role in her work. “I don’t have any plans for what I’m going to paint [at Avant Arte] yet,” she reveals. No sketch? Not even an idea of what color palette she plan to go for? “No.”

The artist has lived in Berlin since 2010, a place that she describes as being “very comfortable,” as she enjoys being in a city that is not too busy and is also close to lakes and other natural amenities. She also continues to work with König Galerie in Berlin despite the recent #MeToo scandal allegations against its founder, Johann König.

Although there is a growing community of Asian artists living in Berlin, Rokkaku says that she still maintains her ties with Japan and Asia. For example, she has challenged herself to make bronze sculptures and is working with a Japanese foundry on the project. The works are for a yet-to-be announced museum show in Asia, which is expected to be a follow-up to her 2020 museum show at the Chiba Prefectural Museum of Art. “It’s very difficult,” she explains, of working with bronze.

While maintaining her Asian roots is important to Rokkaku, she is also happy to embrace new ways of living and making art. “The world is in a very different place right now. I don’t have to become a European living in Europe. I want to be myself, to absorb different cultures while enjoying the differences,” Rokkaku says.