Home News ‘Just Do It’: Artist Peter Saul Explains How He Keeps Making His... 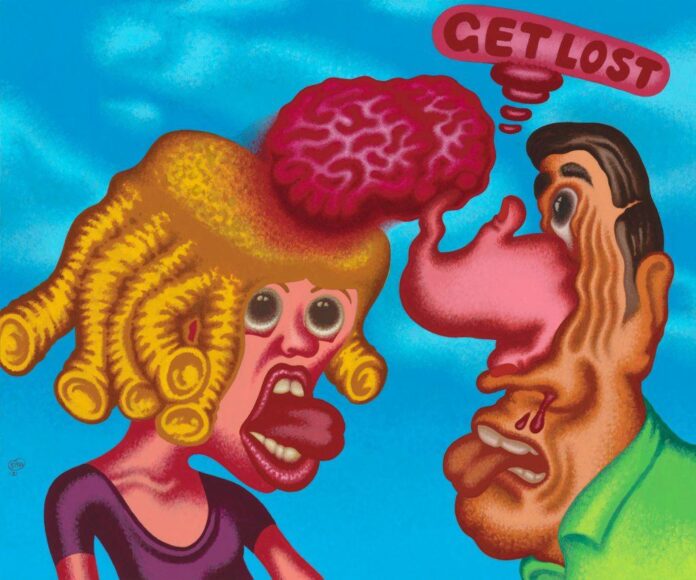 At 87, Peter Saul is free as a bird. He has the luxury to pick and choose only the things he likes to do, most of the time. His imagination continues to run free, allowing him to translate his razor sharp observations of the world and unique sense of humor onto the canvas. “I just do whatever I want,” the painter told Artnet News.

Such freedom, however, comes with discipline. At least, this seems to be the case for the veteran painter. He still keeps a daily routine, albeit a relaxing one. He makes breakfast while “wasting time” in the morning. His afternoons are usually action-packed, working rigorously in the his studio, which is located above the space where his wife, Sally, makes ceramics. He reads books while waiting for the paint to dry. “Even acrylic takes a few minutes to dry,” he quips. Sally gets dinner ready at about 7:30 p.m., and that is when Saul puts his paint brushes down for the night. There’s also a calendar that keeps track of the couple’s meetings and activities. His studio can be messy, he said, but his paintings are always tidy.

“I like being an artist and I don’t need any approval. It’s kind of unusual. I don’t seem to need encouragement,” the bubbly artist said. “Just do it.” 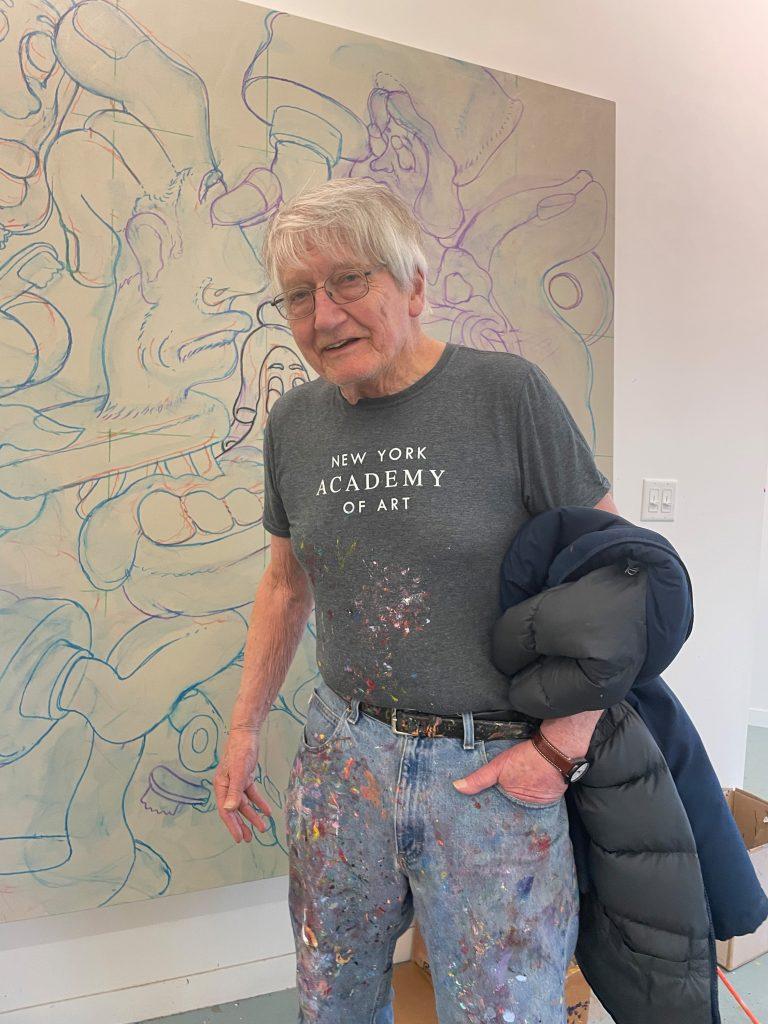 All that Saul needs to work is an image that grabs his attention. “If I can’t get an interesting sketch of the image, I don’t paint the picture,” Saul writes in the exhibition booklet. For more than four decades, the artist’s has created whimsical and colorful paintings this way, and the creative spark is still bright within him, as demonstrated by his latest body of work, currently on show at Michael Werner Gallery in London. The seven new paintings on canvas and five works on paper could be political, or at times too surreal to make sense, but they definitely are eye-catching.

(2021), for example, depicts three small men, each with a cigarette in his mouth, attempting to tame a horse chomping on a fat cigarette. “It’s such a stupid idea, I couldn’t resist that,” Saul laughed. “I was looking for an exquisite corpse idea from the Surrealist artists. Well, I thought I’ll just do an exquisite corpse but it’ll be three people. I’ll paint one half of the horse brownish, and one half back and add a little green leg.”

“And then I said, what can I do with the mouth? Well, I’ll put a cigarette in, and once I put it in, I realized it kind of made sense,” continued Saul, who quit smoking 37 years ago. The three men pose as instructors, teaching the horse how to smoke. “But the horse doesn’t know what he’s doing.” 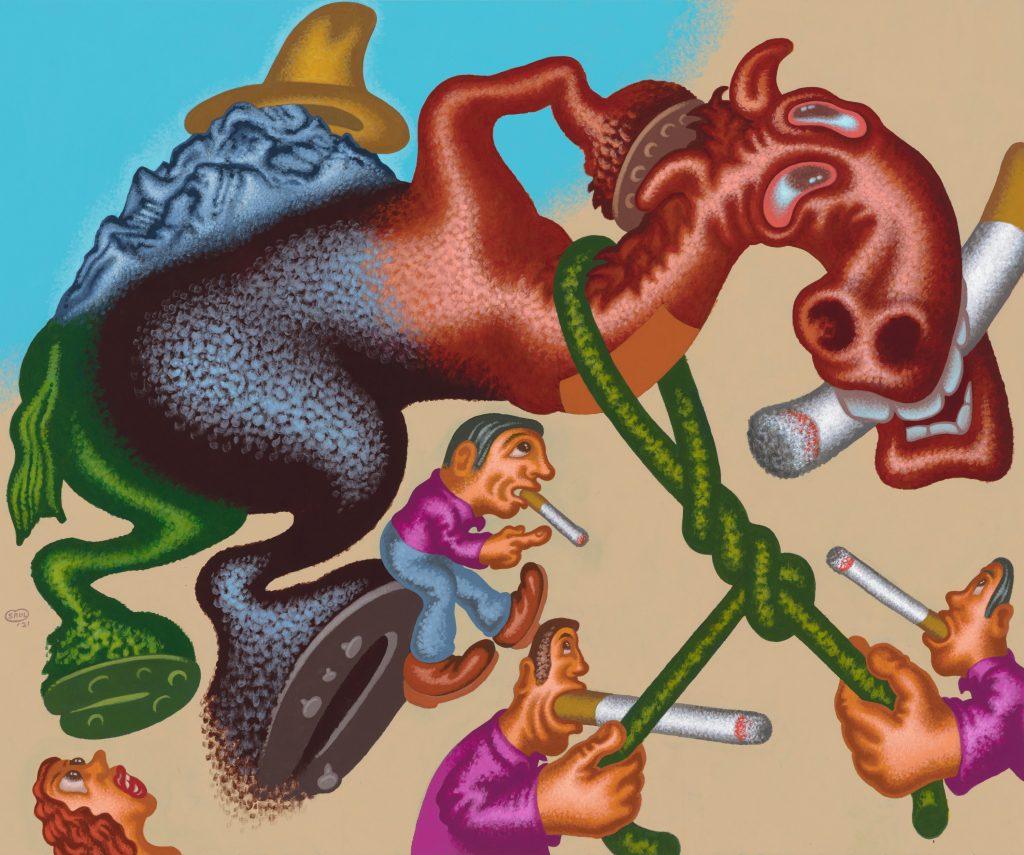 Another painting, (2022), features multiple figures (and a car) trying to clean each other’s teeth, but not everyone is doing the job right. Some go after another characters’ hair. One appears to be cleaning a tire. Saul said the idea originated from having dental work done after a bridge had come off. He then started to doodle, adding seven or eight toothbrushes “in various inappropriate places.”

“And then I had different people brushing different people’s teeth, which is already very questionable. Everyone I know brushes their own teeth,” he said. “I just thought it would be fun to do.”

He then moved to Europe, and lived there from 1956 to 1964. In Paris, he encountered the Surrealist painter Roberto Matta, who introduced him to the American dealer Allan Frumkin. Frumkin gave Saul his first show at his Chicago gallery in 1961 and went on to represent the artist for the next three decades.

Over the years he developed a unique visual language influenced by pop culture, with brightly colored, figurative, and sometimes grotesque images that satirically comment on American society, politics and historical events. 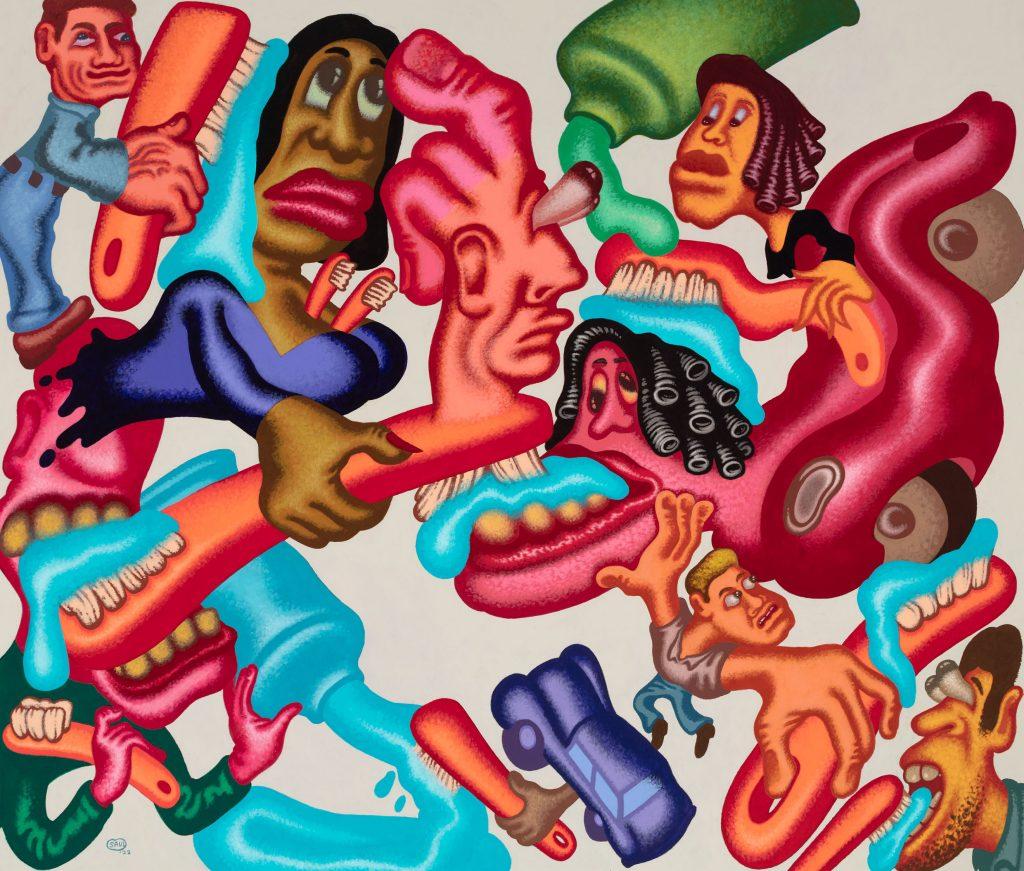 “I was at one time important, a long time ago, like in 1960 to 64,” Saul recalled. “I was an important artist, but then, I fell off a cliff, and was no longer important.” The art scene in America was in transition, as was the general social and political atmosphere, with a brutal and unwinnable war in Vietnam ongoing. Saul said that the artistic rhetoric at the time was influenced by an “intellectual attitude driven pretty much by people who had PhD degrees,” and who thought that “figurative and political work was very negative.”

“So I really just painted for an audience of two people, Allan Frumkin and me. Nobody else liked it,” he said. This lack of interest lasted for around a decade, from 1966 to 1976—but at the same time, no one told him not to paint what he was painting. “I was extremely isolated.”

So Saul moved to Texas in 1981 to teach at the University of Texas in Austin and remained there for two decades. His career began to take a turn around 25 years ago, and the market for his paintings started to pick up. “It’s been much kinder to me since then. Sally and I have benefited greatly from the art world. My price has gone way up,” he said. 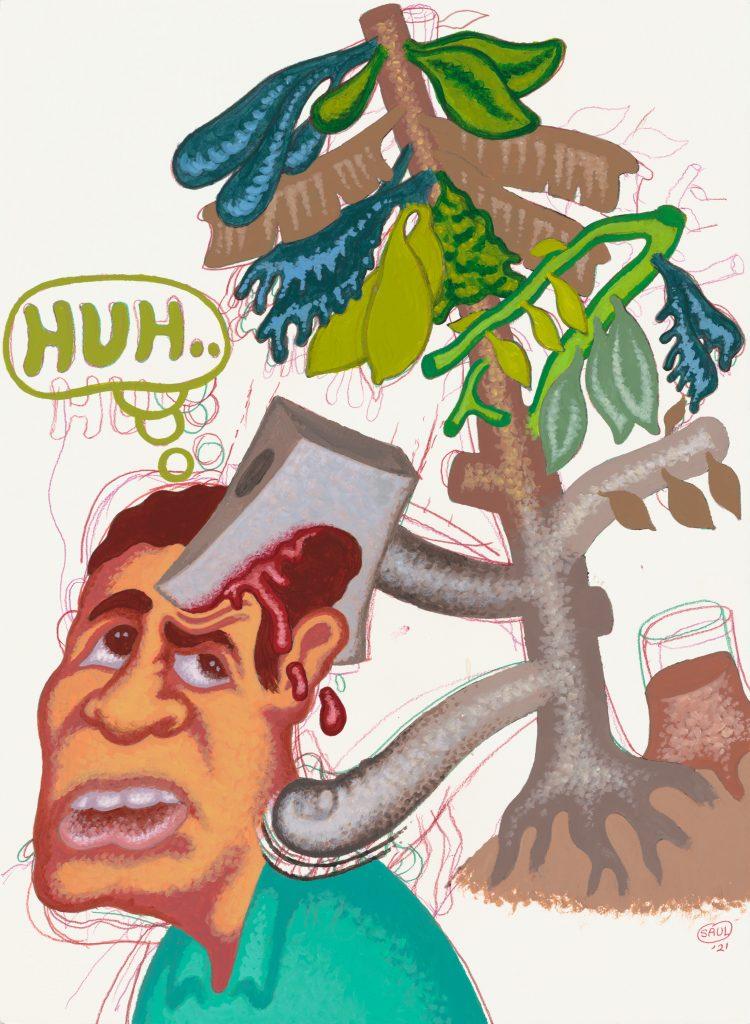 His paintings can now be found in the hands of private collectors all over the world, from New Zealand to Bangkok and Hong Kong. An auction record was set in 2016 with the sale of his 1974 painting at Leslie Hindman Auctioneers in Chicago, for $575,000, nearly double the presale estimates, according to Artnet Price Database. Retrospectives of his practice have been featured at institutions, such as the Schirn Kunsthalle in Frankfurt in 2017, and the New Museum in New York in 2020.

Looking ahead, Saul plans to take on climate change in future paintings. In fact, among the new works on display in London are two new drawings on the subject: (2022) depicts a melting Earth, while an axe-wielding tree attacks a man in (2021).

“Now, it doesn’t matter whether you are figurative, abstract, Cubist, Expressionist or anything Surrealist at all,” the artist said. “People are more interested in who you are than the style you paint in.”

“I’m very pleased to be appreciated,” Saul adds about the late-in-life recognition. “I’ve enjoyed my whole life, frankly. I’m rather modest. My demands were modest. I just asked to live, you know, and I need to be happily married.”

The British Museum Declined to Show Ultra-Precise Digital Replicas of the Parthenon Marbles. So Another London Institution Stepped in

How Do You Know If an Artist Is Good Enough to Date? [Cartoon]