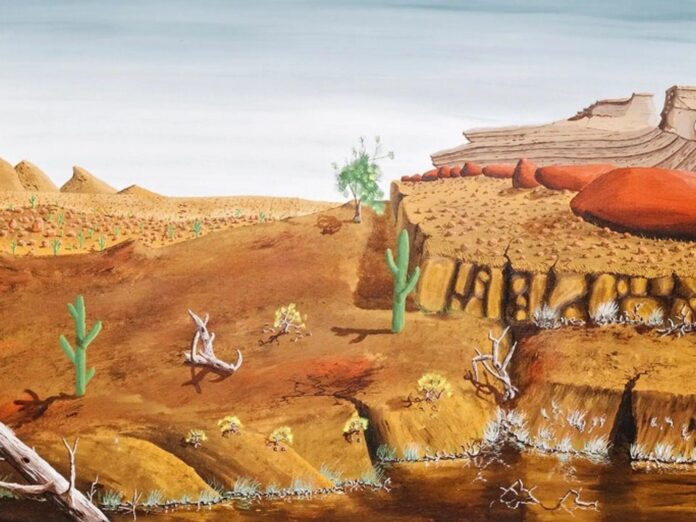 The artist Peter Doig has been awarded $2.5m in a strange legal saga that began in 2013, when the gallerist Peter Bartlow and a former prison corrections officer named Robert Fletcher sued Doig, claiming that a painting in the correction officer’s possession was a highly valuable early work that the artist had made while in prison in 1976 but that Doig was denying authorship of it, therefore rendering it valueless in the eyes of the art market.

The work, which was signed “Pete Doige ‘76”—note the misspelling of the last name—depicts a desert landscape, and it was indeed painted by an inmate at Thunder Bay Correctional Center, the prison in Ontario, Canada where Fletcher worked. Fletcher later purchased it from the inmate for $100 and, in 2011, a friend noticed the signature and tipped Fletcher off to the chance of the work being an early Peter Doig, and therefore a quite valuable painting. With this idea in mind, Fletcher then reached out to Chicago-based Bartlow for help selling the work. He also contacted Sotheby’s, who voiced great interest in the work and agreed that it could be quite valuable if it were able to be properly authenticated.

Fletcher and Bartlow contacted Doig through multiple channels, but when Doig flatly denied having made the painting or having ever spent time in the Thunder Bay Correctional Center, Fletcher argued that the denial was due to a personal vendetta, and brought about the initial lawsuit.

The defendants were able to source a number of primary materials demonstrating the high unlikelihood of Doig being incarcerated at the time, including school records showing he was an active student in the years in question, and personal correspondences. When asked, Canadian police were unable to find anyone with Doig’s exact name and birthday that had a criminal record. In 2013, defendants were able to track down a woman named Marilyn Doige Bovard who confirmed that she had a brother named Pete Doige who did indeed spend time in the Ontario prison in the 1970s and had been a painter, though he had died in 2012. According to the most recent legal filing, Bovard even “asserted that the desert scene [the painting] depicted resembled an area in Arizona where her and Doige’s mother had lived after divorcing their father”, and she provided documentation including a student identification, driver’s license and carpenter union membership card to prove that her brother had resided in the area, but the plaintiffs pressed on with the case.

In 2016, a Chicago judge ruled that Doig “absolutely did not paint” the disputed work. After the ruling, Doig moved for sanctions, and last month a judge ruled in support of the support of $2.5m in sanctions, stating that the ruling came partly because, by mid-2014 at latest, “it should have become indisputably clear to Plaintiffs and [their counsel] that their claims stood no chance of success and, in fact, that the claims were factually meritless”, but they continued to press on.

Doig’s lawyer said in a statement that any money the artist would receive as a result of this ruling would be donated to a nonprofit that aims to give incarcerated people greater opportunities to make art. Bartlow, the Chicago gallerist, in turn told The New York Times that he still believed Doig to be the work’s author, and that he was considering an appeal “or other options”.

Bob Dylan’s Handwritten Love Letters to His High School Sweetheart (Envelopes and All) Sold for Nearly $700,000 at Auction