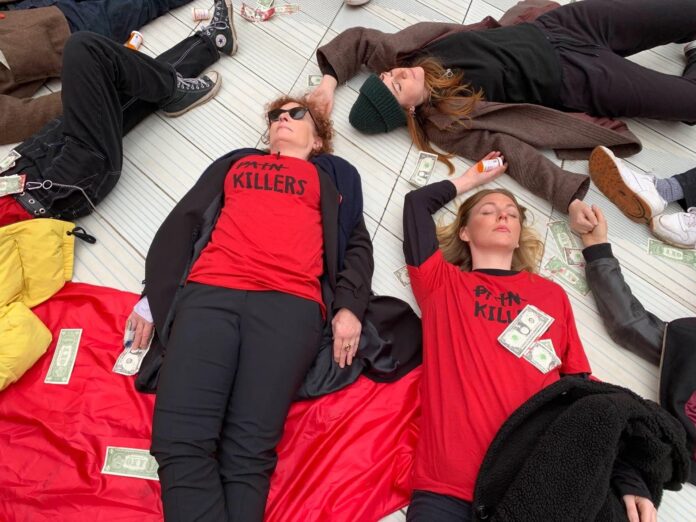 Artist and film-maker Laura Poitras’s latest documentary, All the Beauty and the Bloodshed, about artist and activist Nan Goldin’s tireless international campaign to bring members of the Sackler family to justice for their roles in the opioid epidemic, will screen at the New York Film Festival (NYFF) on 7 October, roughly a month after it has its world premiere at the Venice Film Festival.

The film is partly a chronicle of Goldin’s life and career, from her suburban upbringing to becoming one of the most innovative and impactful photographers of the last 50 years. It also follows her efforts of the past five years, since her own recovery from opioid addiction, to force a reckoning in the art world and beyond with the Sackler family, members of which own OxyContin manufacturer Purdue Pharma and have used some of their profits from opioid sales to very publicly support art institutions.

As Goldin’s group Pain (Prescription Addiction Intervention Now) has multiplied its protests at major museums that have named buildings and galleries for the Sacklers in recognition of their donations, many institutions have removed the Sackler name or pledged to no longer accept money from the family, including the Metropolitan Museum, Musée du Louvre, British Museum and others.

“I am thrilled to be part of the New York Film Festival with Nan,” Poitras says in a statement. “Her art and activism are deeply rooted in this city. It is an honour to return to the festival, and to do this with Nan is so meaningful.” Citizenfour, Poitras’s Oscar-winning documentary about National Security Agency whistleblower Edward Snowden, had its world premiere at the NYFF in 2014.

In addition to being the subject of the so-called “Centerpiece” screening at the NYFF, Goldin has been selected to design the festival’s official poster. Her design will be revealed next month, shortly after the Labor Day holiday (5 September). “As soon as we watched Laura Poitras’s piercing new film, we knew that Nan Goldin was the right artist to design the official poster for the 60th anniversary of the New York Film Festival,” says NYFF executive director Eugene Hernandez in a statement.

The festival’s poster is typically designed by a leading artist, from Kara Walker in 2021 and John Waters in 2020 to Niki de Saint Phalle in 1973 and Larry Rivers for the inaugural edition in 1963.

All the Beauty and the Bloodshed is also in competition at the 2022 Venice Film Festival, which opens 31 August.

Would you invest in art without seeing it? New scheme invites users to buy into securitised—but unnamed—art loans