Home News A 54-Year-Old History Teacher in Connecticut Just Became One of the Art... 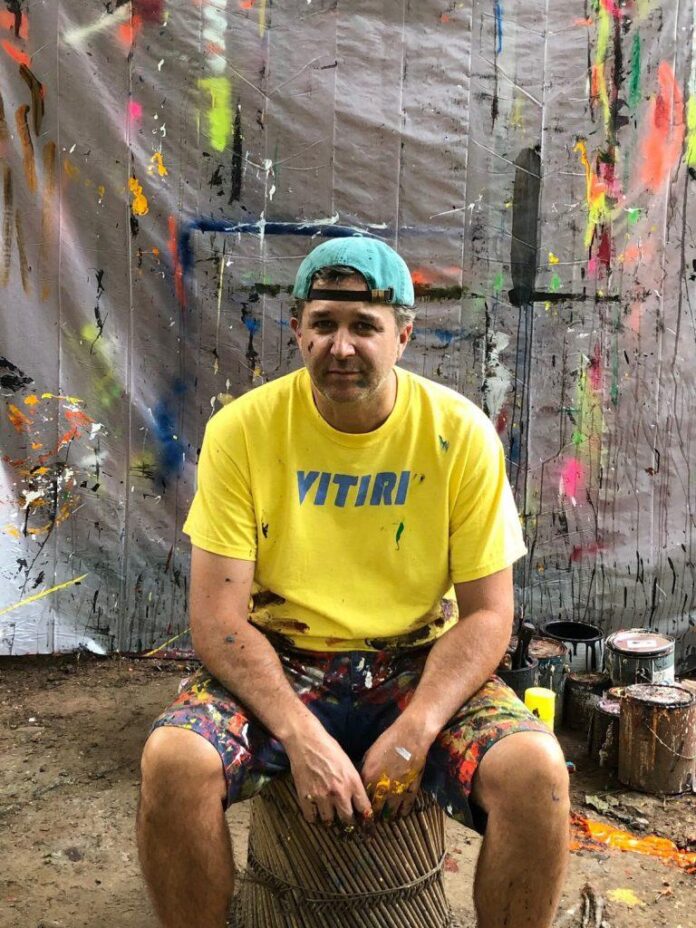 He’s 54. He hasn’t graduated from a prestigious art school. Instead, for three decades, Ober has taught U.S. and Soviet history in a prep school in rural Connecticut. And for the past 15 years, he’s also run a gallery down the street from the school, showing nonconformist Russian artists and giving early shows to Katherine Bradford, Robert Nava, and Jordy Kerwick.

His own paintings of monsters and alligators, snakes and deities, taped nipples and brandished swords share the looseness and raw primitivism with these popular artists. Collectors are going gaga.

“I just love the work,” said Los Angeles-based Alberto Chehebar, who discovered Ober on Instagram two years ago and quickly snapped up a bunch of paintings. “He just vomits these extraordinary works with no filter and with such sincerity.”

Ober’s solo debut, “Motley Crew,” at Shrine Gallery in New York is sold out, with prices ranging from $3,000 to $25,000, according to owner Scott Ogden. Fans include artist Erik Parker and magazine art critic Jerry Saltz, who recently called the paintings “aggressive, strange, and sensual.”

“What I most admire about Rob’s practice is his completely intuitive approach,” said Ogden, whose gallery is focused on Outsider art. 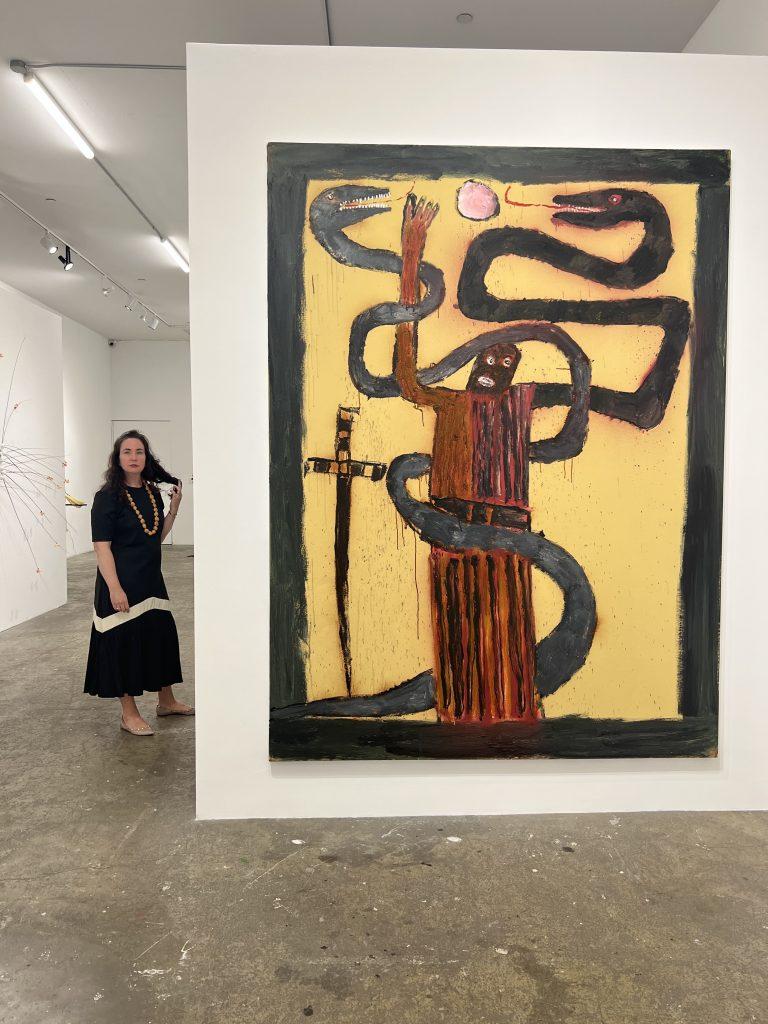 Dealers often have roots as artists, but moving in the reverse—from sales to art making—is unusual. Joel Mesler, who began as an artist before opening an emerging-art gallery in Los Angeles, migrating to Manhattan and then East Hampton, recently embraced his early calling; his paintings have been selling for hundreds of thousands at auction since the pandemic.

Ober, on the other hand, never self-identified as an artist, although he said he has painted since childhood. While idiosyncratic, his transformation into a successful artist says a lot about the red-hot contemporary art market, with its emphasis on discovering the next big thing—and financially profiting from early access. It’s also a testament to the power of Instagram, where Ober the art dealer found other artists, and Ober the artist was discovered as well.

“I never made art with the intent of becoming an artist or having an art career or showing my art,” Ober told me by phone from his summer retreat in Maine.

A son of an American diplomat, Ober grew up all over the world and many of those early experiences are now trickling into his paintings. He spent formative years in Russia, hired snake charmers in Delhi, and played tennis at Nick Bollittieri tennis academy in Florida at the same time as Andre Agassi. He was expected to have a conventional career, like getting a job on Wall Street. Instead, he spent the next 30 years enmeshed in art and teaching.

“There’s this urgency about the paintings,” said Parker, an artist and collector of Outsider art, who owns a canvas by Ober. “Like they need to be in this world.” Ober may not have been making art for long, but “you can feel his lifelong obsession with looking at art.”

Ober first entered the art world as a collector of Russian art in the 1990s, soon after getting a job as a history teacher. His first love was Malevich but he couldn’t afford it, once jokingly asking a dealer for a 50-year payment plan. Nonconformist art was more affordable and Ober began buying works by Leonid Sokov, Ilya Kabakov, and Mikhail Roginsky. 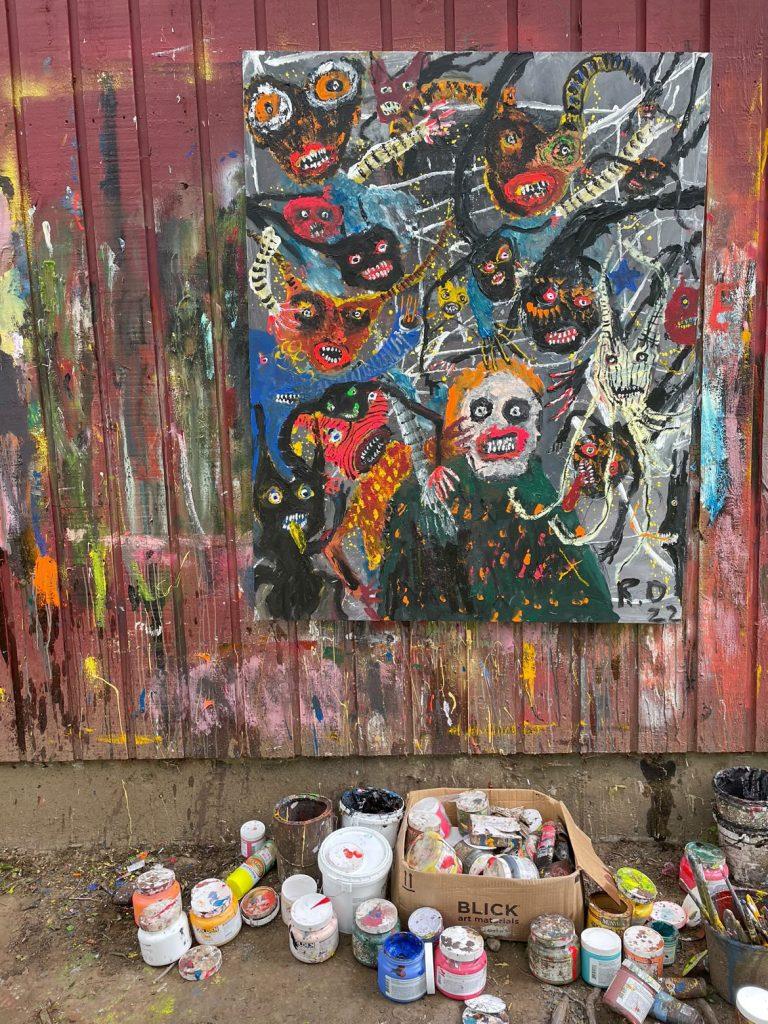 As the Russian art market began to take off in the post-Soviet era, Ober decided to open a gallery to introduce Americans to contemporary Russian art. He showed works from his personal trove and other collections. He brought Russian artists to New York for month-long residency program, during which they made art for exhibitions at Ober Gallery, he said.

“When I ran an art gallery, it was never obviously about the money,” Ober said. “I was in Kent, Connecticut. But it was about giving artists a chance to share their unique vision. And also to acquire their work.”

Ober started painting around seven years ago, when his mother’s health started to decline.

“I was carrying along a lot of anxiety,” he said. “I don’t really drink, I don’t do drugs. And I needed to put it somewhere. This floodgate broke when my mother became ill and all this imagery just poured out. All of these experiences that I had bottled up inside and been thinking about for years.”

As a teacher in a boarding school, Ober had to juggle multiple responsibilities: teaching, coaching, mentoring—not to mention running his gallery. He painted on weekends and at night in a 1,000-square-foot studio behind a firehouse. His Instagram posts show him outside of a red barn in paint-splattered North Face jackets, a far cry from his preppy, buttoned-up look he sports during his day job.

It helps that Ober is prolific. Insanely prolific. He estimates he’s made about 1,000 paintings so far. The day before we spoke, Ober produced 15 paintings, measuring 20-by-16 inches, in the span of just three or four hours, he told me.

“It’s fucking crazy,” said Parker, who’s been making art for three decades. “I am jealous because I make one [painting] in a month.” Painting that fast is hard, he added, because of how vulnerable it makes you feel. “It sounds corny, but you have to know who you are.”

“Because I’m an expressionist, I work very quickly, intuitively,” Ober said. “I don’t like my mind to interfere too much with the creative process. There’s a tension there between what’s going on in my head and what my body and my intuition and subconscious is telling me to paint or what the painting is saying it wants to be.” 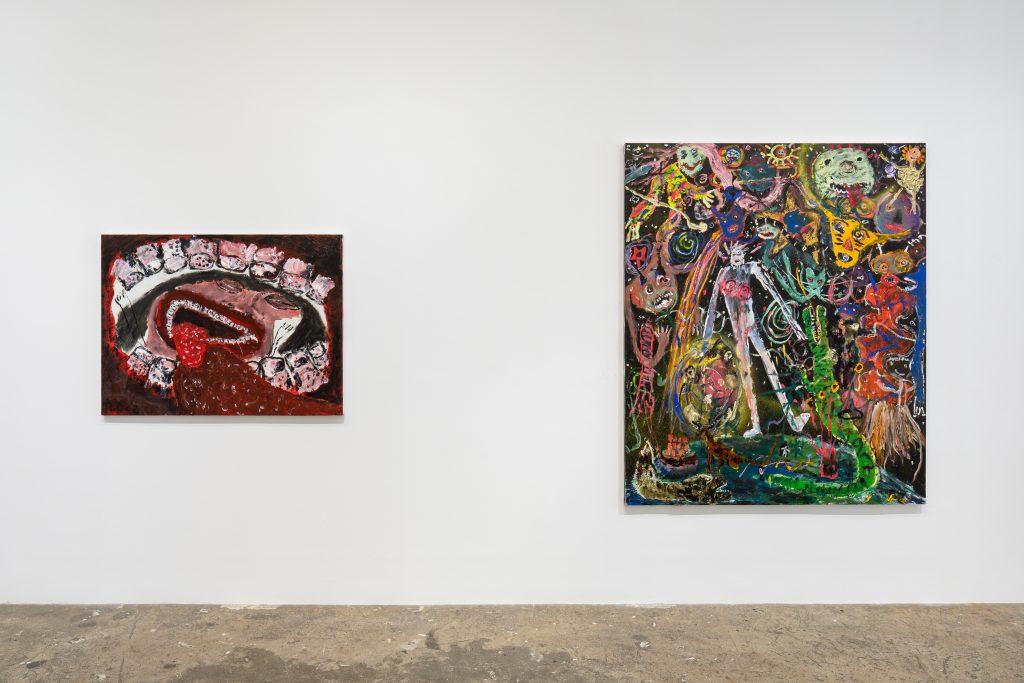 Things have been moving pretty fast outside the studio too. Chehebar’s discovery of Ober’s paintings on Instagram was followed by a shoutout post by Saltz, which was bittersweet because Ober’s mother died the following day, he said. In March 2021, Ogden came up for a studio visit and the two hit it off, linked by a shared affinity for Outsider art, the aesthetic now also embraced by fashionable insiders like Nava and Kerwick.

“I love Outsider artists,” Ober said. “And even though I can’t be classified as one because I grew up in the art world and I am pretty knowledgeable about the history of art, those are my people.”

“I don’t like that expression ‘blew up,’ but we sold a lot of work,” Ober said. “I knew after Miami that something in my life had changed, that a door was opening for a new career.”

But something had to give. In January, Ober staged his final show as a gallery owner, dedicated to work by Lev Meshberg, a Ukrainian-born figurative painter who taught the teenage John Currin. Between February and June, Ober produced 70 paintings, and participated in group shows at galleries in London and Paris, as well as at Dallas Art Fair, showing with James Barron Art.

While vacationing on Peaks Island in Maine, where he bought a house 10 years ago, Ober was preparing for his next project: painted skateboards, to be shown by Ogden, another skateboarder. Some will be editioned, others are unique. Next year, Ober will have a solo show with Shrine in Los Angeles, where the gallery is expanding in the fall.

In preparation for his Shrine show, Ober made eight 8-by-6-foot paintings. And he just bought a 7,500-square-foot building in New Milford, Connecticut, which will become a studio for him and possibly other artists.

While a lot of things have changed as Ober adjusts to life in the art market glare, some will always remain the same. He still supports artists by collecting, and feeds off the creative energy of those paintings, he said.

“Anyone who creates, I think they understand that this is not really about you,” Ober said. “It’s about your responsibility to art.”

Is the graphic designer who refuses to create websites for same-sex couples an artist?