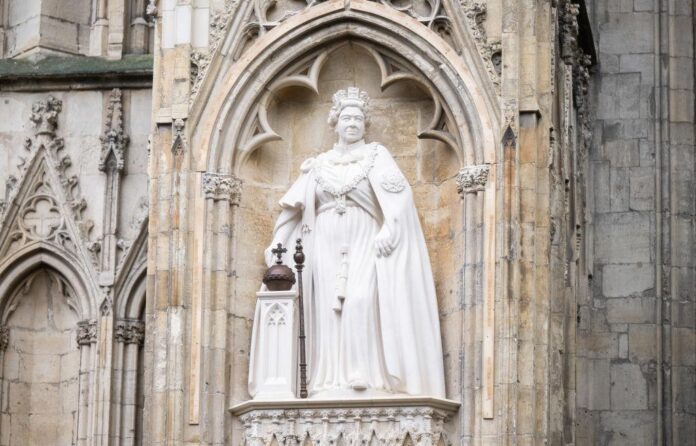 King Charles III unveiled a new statue of the late Queen Elizabeth II yesterday. It is installed in a niche on York Minster cathedral in York, England.

The work was planned five years ago and had originally been intended to celebrate the queen’s platinum jubilee. It was finished in August, a month before she died.

The majestic statue by Richard Bossons, 52, shows the queen in her robes of the Order of the Garter and has been installed above the West Front entrance of the 850-year-old building. It stands seven feet tall and weighs 1.1 tons.

The sculptor was chosen in a special competition. A stonemason, he has worked at York Minster for 11 years and previously specialized in cathedral gargoyles.

The monument is his first ever portrait.

After completing the design, a 3-ton lump of French limestone was cut by machine before Bossons did the finishing touches himself using a chisel.

“I hope everyone likes it,” he said. “It is the best I could pull out of myself. Hopefully I have done justice to the queen and the king likes it.”

“I wanted to get a sense of her longevity on the throne over 70 years,” he added, of his decision to portray the queen later in her life.

“I am hugely relieved and it will be nice now to go back to my bread-and-butter work.”

At the unveiling, the king called the statue “a tribute to a life of extraordinary service and devotion.”

“The late queen was always vigilant for the welfare of her people during her life,” he added.

Eventually, she will look down on Queen Elizabeth Square, a new public space planned for the city and named in her honor.

During his official visit to York, King Charles II and his wife Camilla, the Queen Consort, were targeted by an egg-throwing protestor but were not hit.

“This country was built on the blood of slaves,” the 23-year-old man called out while being restrained by the police.