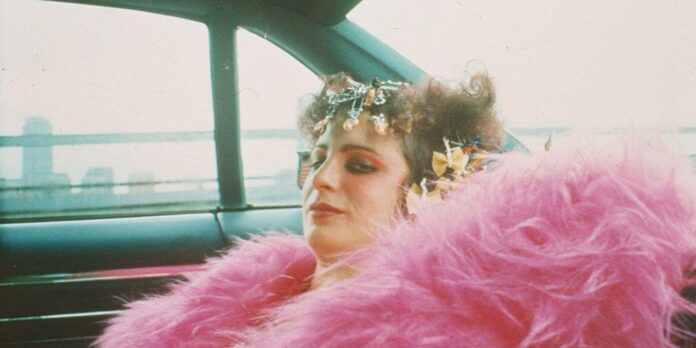 If there were any doubts about how the Nan Goldin bio-doc All the Beauty and the Bloodshed would fit into the oeuvre of film-maker Laura Poitras, the investigative journalist and director of the Edward Snowden documentary Citizenfour, they are dispelled by the opening scene, depicting a covertly plotted act of civil disobedience: the 2018 protest during which Goldin and other members of Pain (Prescription Addiction Intervention Now) tossed empty bottles of Oxycontin into the moat surrounding the Temple of Dendur in the Metropolitan Museum of Art’s Sackler Wing.

The film—which won the Golden Lion at the Venice Film Festival last week, shortly before its North American premiere in Toronto, and will be the centrepiece of the New York Film Festival in October—is a significant reflection on Goldin’s own body of work. It draws connections between her life, her art, her addictions and her activism, in particular her present-day crusade to remove the name of the Sackler family—who, as the owners of Purdue Pharma, the makers of Oxycontin, grew unimaginably wealthy off the American opioid crisis they did so much to foster—from the many institutions complicit in artwashing their dirty money. Both a friendly introduction to and critical appraisal of Goldin’s work, the film tracks between the personal and political to sing a ballad of memory, family, power and, of course, dependency—chemical as well as sexual.

After the credit-sequence flash-forward, the film begins at the beginning, with the familiar click of a carousel slide projector and flickering progression of snapshots, particularly of Goldin’s older sister Barbara, who died by suicide as a teenager. These earliest photos intimate an archetypal repressed suburban 1950s upbringing from which both Barbara and Nan tried to flee, only one of them successfully. Barbara’s suicide provided the foundational trauma of Nan’s life, and the inspiration for the chosen-family slideshows The Other Side and The Ballad of Sexual Dependency (dedicated, of course, to Barbara’s memory). The film follows Nan through a youth spent finding her people, in the gay bars of Boston and Provincetown, Massachusetts, and the downtown Manhattan of the late 1970s and early 80s.

Poitras has, of course, quite a photo album to leaf through, one which also includes, alongside Goldin’s photographs, de facto home movies in the form of underground films by the likes of Vivienne Dick and Bette Gordon (like the photo-shoot sequence featuring Dick and Goldin trying on outfits in Gordon’s Empty Suitcases, during which you can see Goldin take her famous 1980 photo Vivienne in the Green Dress). This is, cumulatively, an insular and often celebratory group portrait, and the film pulls many familiar faces from the archives, in both famous photos and outtakes—Suzanne Fletcher, David Armstrong, Cookie Mueller, Vittorio Scarpati, Jim Jarmusch and Sara Driver. Poitras duly pays tribute to the party atmosphere of Goldin’s early projector performances by scoring photo montages to The Velvet Underground and Screamin’ Jay Hawkins.

Goldin’s project is radically transparent, starting with the Ballad’s famously intimate dual portraits of her and then-boyfriend Brian Burchill in bed, and her subsequent self-portraits taken after being beaten by him. (If you know her work you know what’s coming; the film’s only real misstep is the ominous low string hum that builds on the soundtrack as Nan begins to tell the story behind her 1984 photo Nan One Month After Being Battered.) With Poitras, she is publicly open for the first time about having done sex work. And she discusses her opioid use, including heroin in the 1980s, up to 18 pills of Oxycontin a day during the depths of her addiction in the 2010s, a near-fatal brush with fentanyl and, in a public hearing before the New York State Assembly Committee on Alcohol and Drug Abuse, her continued use of buprenorphine.

The Other Side and The Ballad depict people living lives of enormous precarity, economic and otherwise. The loss of her friends to drug use and Aids weighs increasingly heavily on her work, in this film’s telling; the Goldin-curated exhibition Witnesses: Against Our Vanishing, which lost National Endowment for the Arts funding amid the uproar over David Wojnarowicz’s incendiary catalogue essay, gets significant screen-time here, and it is obvious that activist group Act Up was an inspiration for Pain’s die-ins at the Guggenheim Museum and Musée du Louvre.

It is as if, in the Sackler family, Goldin found the personification of the dominant social order that killed her sister and so many of her friends and colleagues, that gave her art its life-or-death stakes. And it is also as if, through her activism, she has found a new family—when Goldin delivers a victim’s statement during the Purdue Pharma bankruptcy hearings, one of the younger members of Pain holds her shaking hand in a gesture that would not be out of place in one of her photographs.

It is in part because Goldin’s images are, after all, in the permanent collections of many of the institutions Pain protested that the group had such success pressuring the Sacklers when the government failed, at least in its purposefully limited aims of making the family name toxic in the philanthropic world. This—and the knowledge that members of the Sackler family extracted $10bn from Purdue Pharma as the opioid crisis was mounting, and used its bankruptcy to protect their personal wealth—makes the film implicitly an open-ended question about all the other reputations laundered through art.