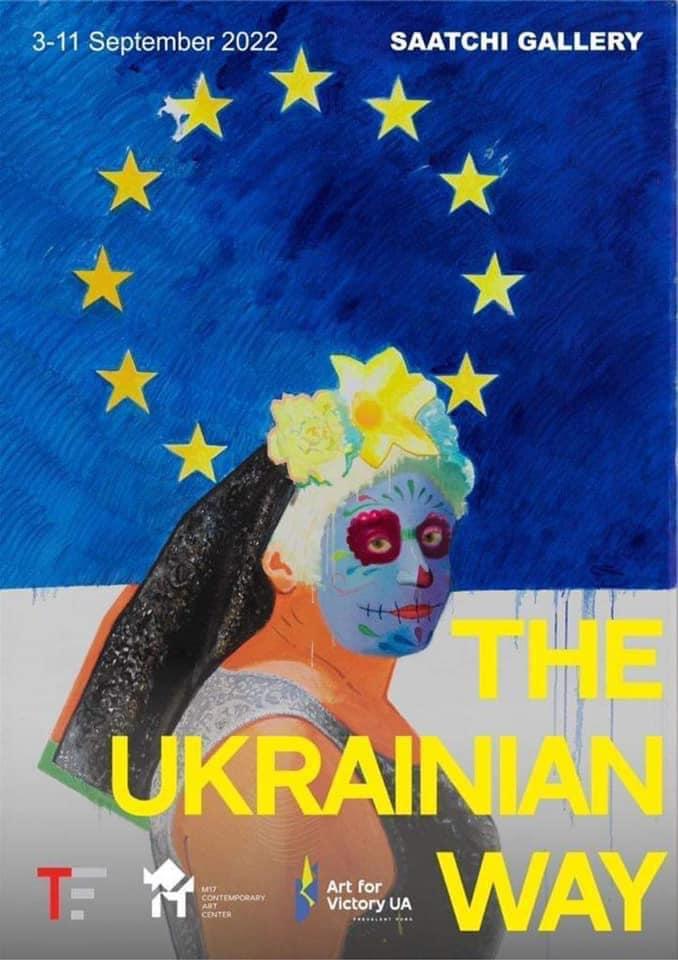 London’s Saatchi Gallery has cancelled an exhibition of Ukrainian contemporary art after a social media outcry over it being organised by the Russian banker and art collector Igor Tsukanov, with cultural impresario and fellow Russian Marat Guelman as a consultant.

The Ukrainian Way had been scheduled to show 100 Ukrainian artists at the gallery from 3-11 September accompanied by an auction of physical works and NFTs. With Kyiv’s M17 Contemporary Art Center (M17 CAC) listed as a partner, a press release claimed that all proceeds would go to “charities supporting Ukrainian arts and culture including the Art for Victory Fund and the Ukrainian Emergency Art Fund.”

“Saatchi Gallery was not the organiser or curator of The Ukrainian Way nor was it involved in any direct communication with the artists or collectors,” the venue’s press office says in a statement to The Art Newspaper. The gallery had donated its space with the goal “of promoting Ukrainian artists and generating charitable funds for the benefit of Ukraine” and its “involvement with the project was predicated on the involvement of key Ukrainian stakeholders”, it adds. “We received assurances from those stakeholders that the project was one they fully supported. Once it became apparent that support from a number of these key parties had been withdrawn, along with the reports of concerns raised by artists in recent days, Saatchi Gallery immediately took the decision to cancel the ten-day exhibition and withdraw its support from the project.”

The gallery says it will work with the Ukrainian Institute, which promotes Ukrainian culture internationally, to “find ways to showcase the works of Ukrainian artists, raise awareness of the unacceptable situation in Ukraine and to generate funds to support Ukrainian culture”.

Tetyana Filevska, the creative director of the institute—which called for a boycott of cultural cooperation with any organisations affiliated with Russia following the 24 February invasion of Ukraine—told The Art Newspaper that “it is hard to imagine any kind of cultural cooperation between Ukrainians and Russians especially in a Ukrainian project” and that “both Tsukanov and Guelman created a level of miscommunication” that was unacceptable.

M17 CAC’s director Natalia Shpytkovska says in a statement: “Unfortunately, under the circumstances of the project’s flawed informational presentation, as well as uncoordinated actions and statements, M17 CAC withdraws from participation in The Ukrainian Way exhibition.”

Tsukanov told The Art Newspaper: “The circumstances in Ukraine are so tragic that their reflections in people’s mind create such surreal perceptions on the true intentions. The show The Ukrainian Way is the biggest Ukrainian art show in history and my fifth show at Saatchi. All of them were blockbusters. This time I picked the wrong parter whose director wanted to kill it,” he said, referring to Shpytkovska. “She managed to achieve her goal.”

Last week, after seeing announcements for the show, Ukrainian curators and artists said that it was happening without their consent. They took to social media to condemn it as an egregious example of Russian cultural colonialism and an effort by the Russian participants to whitewash their reputations.

“Copyright? No, they haven’t heard about it,” wrote Olha Sahaidak, an art critic and curator who advocated on Facebook for the exhibition to be pulled. “The organisers of the exhibition […] do not pay any attention to the opinion of [Ukrainian artists]. Possession of the object does not necessarily give the right to publish and exhibit.”

Artists commented on her post saying that they objected to being included in the exhibition. Their works are in the collections of Tsukanov and Guelman, who have worked together previously on exhibitions at the Saatchi Gallery. The Tsukanov Family Foundation and the gallery announced a partnership in 2013. Tsukanov’s wife, Natasha—also an investment banker—had been an adviser to the head of the state oil company Rosneft, Igor Sechin, an ally of Russian president Vladimir Putin. The couple, based in London, is not on Western sanctions lists against Russian oligarchs.

Guelman, who moved to Montenegro in 2014 after facing threats in Russia, was a promoter in the late-Soviet era of a movement of Ukrainian artists that he called “southern Russian art”—a term now especially regarded as demeaning—for a Moscow exhibition in the early 1990s. He worked on political campaigns as a strategist for Kremlin interests in Ukraine during the 2000s.

Guelman withdrew from the show several days ago in a Facebook post saying that he “sincerely wanted to help” as someone who had dealt with Ukrainian art since 1987 but that “unfortunately the war, Russia’s aggression in Ukraine, and all of this is not as important as the fact that I am a Russian gallerist.”

The Artist and Designer Thomas Badger Has Figured Out a Way to Create Electrifying Paintings (or Something?) Out of Furniture

It Took Eight Years, an Army of Engineers, and 1,600 Pounds of Chains to Bring Artist Charles Gaines’s Profound Meditation on America to Life....