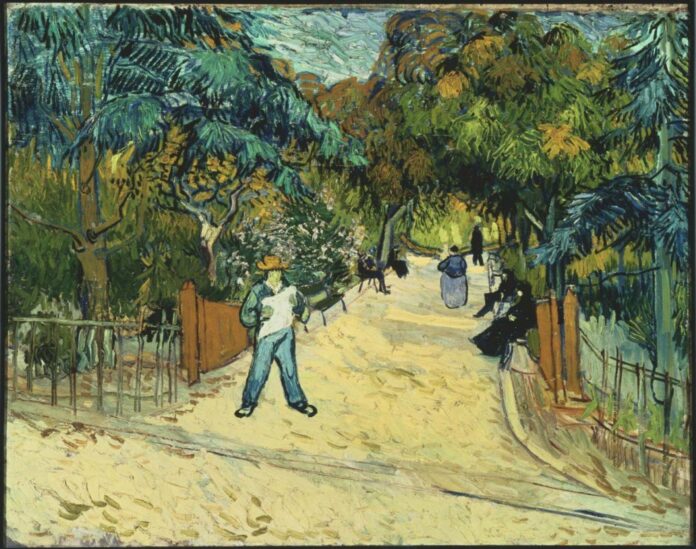 We can report that London’s National Gallery will be mounting a Van Gogh exhibition which it boldly describes as “the most spectacular EVER”. As announced by The Art Newspaper yesterday, the show is scheduled to run from October 2024 to January 2025 and it will be the highlight of celebrations to mark the 200th birthday of the gallery.

The show will cover Van Gogh’s work from the south of France—where the artist was living in the town of Arles (February 1888-May 1889) and at the asylum on the outskirts of Saint-Rémy-de-Provence (May 1889-May 1890). It was in these two places that he produced his finest paintings, bursting with colour and his dynamic brushwork.

What may come as a surprise is the gallery’s provisional subtitle for the show: Poets and Lovers.

The dual themes of poets and lovers will be introduced at the beginning of the exhibition, with a number of paintings and drawings of a public garden in Arles. This lay directly in front of the Yellow House, which Van Gogh rented in Place Lamartine. These works mainly date from the early autumn of 1888, just before the arrival of Paul Gauguin.

Among this group is Entrance to the Public Garden in Arles (October 1888), which will be coming on loan from the Phillips Collection in Washington, DC. The prominent figure of a standing man reading a newspaper could possibly represent the artist, sporting his favourite straw hat.

On renting the Yellow House in May, Vincent had written to his brother Theo that “the delightful thing about this studio is the gardens opposite”—which must have been looking their best in spring. On another occasion, he described to his sister Wil the view from his bedroom window as “a very pretty public garden, and where you can see the sunrise in the morning”.

Van Gogh soon came to call this urban oasis the “poet’s garden”, associating it with writers. Knowledgeable about literature, he admired the early Italian Renaissance poets Petrarch (who had worked in nearby Avignon), Boccaccio and Dante. From his own time, he loved the writings of Alphonse Daudet, a poet and novelist who spent part of his life in Provence.

Writing to Gauguin, Van Gogh commented: “The unremarkable public garden contains plants and bushes that make one dream of landscapes in which one may readily picture to oneself Botticelli, Giotto, Petrarch, Dante and Boccaccio.” As so often, he drew links between literature and the visual arts.

Vincent even regarded some of his fellow artists as “poets”, using the word in a wider sense to convey an artistic temperament. He entitled a portrait of the Belgian painter Eugène Boch as The Poet (September 1888, now Musée d’Orsay, Paris). He also bestowed this accolade on Gauguin, describing him in a letter as the “new poet”.

And why do lovers feature in Van Gogh’s paintings? We can only speculate, but he may well have been searching for female companionship, and have felt pangs of envy when he saw strolling couples in Arles. Couples therefore appear as idealised figures in some of his landscapes.

In Public Garden with a Couple strolling (The Poet’s Garden) (October 1888, now in a private collection) we see what Van Gogh described as “two figures of lovers”. The blue-clothed man with the straw hat might again represent the artist, with Vincent imagining himself promenading just outside his house with a companion.

The National Gallery has already negotiated borrowing a large and heavily worked drawing of the public garden from the Art Institute of Chicago, created just five days before Vincent left Arles for the asylum. On 3 May 1889 he wrote to Theo: “Today I’ve made one of those drawings which became very dark and quite melancholic for springtime.”

Weeping Tree (May 1889) has never been exhibited in the UK. Drawn with a reed pen, the scene gives the impression of a country park—not a busy urban area. This time the landscape is devoid of human figures. Although depicting a willow, it is significant that Vincent calls it “the weeping tree”, perhaps indicative of his state of mind as he was about to enter the asylum.

Van Gogh’s depictions of the public garden suggest a tranquil location and, in the case of the paintings, a pleasant place for a stroll. But Place Lamartine was actually in a busy and insalubrious part of town. It lay between the railway station and the “street of the kind girls” (Vincent’s term for the red-light district), and was edged by several all-night cafés and the police station. Vincent used artistic and poetic invention to create his own interpretations of the public garden, suggesting it as a relaxing place of pleasure.

Sadly, the public garden had been paved over by the early 20th century. Today most of Van Gogh’s “poet’s garden” has been taken over by a busy traffic roundabout and a sprawling carpark, edged by a Monoprix supermarket and a stark new college building. But fortunately two sides of Place Lamartine remain almost unchanged from Van Gogh’s day: the embankment of the Rhône and the city’s Roman ramparts.

The public garden is just the first of half a dozen broadly chronological themes in the coming National Galley show, with groupings of largely landscape works from Arles and Saint-Rémy, plus one on flower still lifes (centred around the Sunflowers).

The National Gallery show is being curated by its 19th-century specialist Chris Riopelle and the independent Van Gogh scholar Cornelia Homburg.

A gallery spokesperson is flagging it as “the most spectacular” Van Gogh exhibition ever. That will surely be an impossibly strong line to live up to, but the curators do promise that they have selected only the finest works—which should make it a fitting 200th birthday celebration for the National Gallery.

• Adventures with Van Gogh will be taking a summer break, returning on Friday 2 September

• The Minneapolis Institute of Art is opening a display on Van Gogh and the Olive Groves (25 June-18 September). This follows a much larger exhibition on this topic at the Dallas Museum of Art and Amsterdam’s Van Gogh Museum. The centrepiece of the Minneapolis presentation will be its own Olive Trees (November 1889), on which a fingerprint was recently discovered, presumably that of the artist. Other works on show will be five paintings which were in the Dallas-Amsterdam exhibition (four on loan from the Van Gogh Museum), plus three works on paper at the Minneapolis Institute of Art. These include a privately owned watercolour on long-term loan, Old Woman sewing (1881).

• Christie’s is to auction an important early Van Gogh gouache in London on 28 June. Pastures near Rijswijk and the Schenkweg (Weilanden bij Rijswijk en de Schenkweg) dates from January-February 1882, when the artist was living in The Hague. It shows the view from his garret apartment, on the outskirts of the city, overlooking fields and the Rijnspoor railway station. The estimate is £500,000-£800,000. It is being sold by descendants of the deceased UK-based couple Cecil and Hilda Lewis and had been acquired in the legendary 1957 sale of the collection of New York State-based Wilhelm Weinberg.

• New York’s Metropolitan Museum of Art will be unveiling its four recently purchased Van Gogh prints in a display on Van Gogh, Mondrian and Munch: Selections from the Department of Drawings and Prints (7 July-11 October). The four Van Goghs are: At Eternity’s Gate (November 1882), Burning Weeds (July 1883), Gardener by an Apple Tree (July 1883) and Portrait of Dr Gachet (June 1890).

5 Classic Sculptures You Should Know