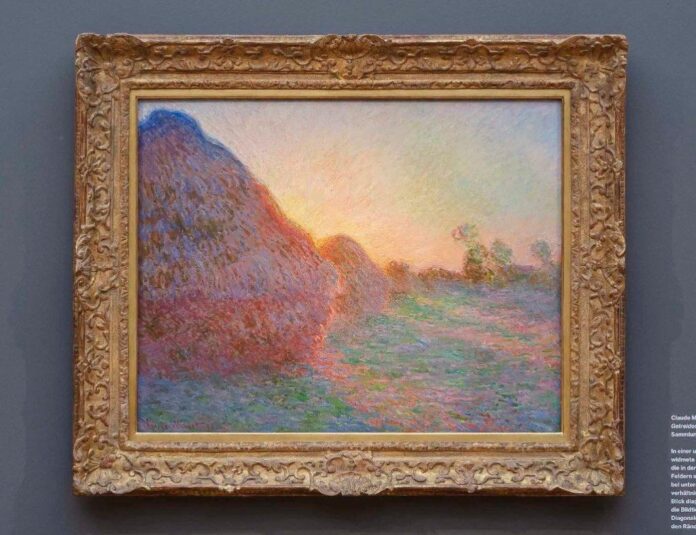 The Museum Barberini in Potsdam, Germany—founded by the German businessman and collector Hasso Plattner—has announced it will close until 30 October to evaluate the “risks revealed” after climate activists threw mashed potatoes at a painting by Monet in its collection yesterday. The action is the latest in a slew of attacks on masterpieces at major museums.

“The attack on a work of the Hasso Plattner Collection as well as previous attacks on artworks, among others in the National Gallery in London, have shown that the high international security standards for the protection of artworks in case of activist attacks are not sufficient and need to be adapted,” the museum’s director Ortrud Westheider said in a statement. “We want to use the incident at our institution as an opportunity to establish a productive dialogue with international museum partners and jointly set the course to preserve art and cultural assets for future generations.”

The incident occurred in the early afternoon of October 23, when two activists from the group Letzte Generation (Last Generation) entered the Barberini. After throwing the mashed potatoes on Les Meules, or Haystacks, painted by Monet 1890, they crouched beneath the work and glued their hands to the wall, but were quickly detached by police and taken into custody.

We make this #Monet the stage and the public the audience.

If it takes a painting – with #MashedPotatoes or #TomatoSoup thrown at it – to make society remember that the fossil fuel course is killing us all:

Then we’ll give you #MashedPotatoes on a painting! pic.twitter.com/HBeZL69QTZ

“We are in a climate catastrophe and all you are afraid of is tomato soup or mashed potatoes on a painting,” they said. “You know what I’m afraid of? I’m afraid because science tells us that we won’t be able to feed our families in 2050.”

The video was posted with the caption: “What is worth more #forall — art or life? Monet loved nature and captured its fragile beauty in his works. Why are many more afraid of one of these images being damaged than of the destruction of our world itself?”

The work in question is on permanent loan to the museum from the private foundation of its patron, Hasso Plattner, who bought the painting at auction in May 2019 for $111 million. The painting is protected by glass and has not been damaged. The museum originally said the work would go back on public display on Wednesday, before announcing the closure of the entire institution on Monday, based on the Plattner’s wish “to analyze the situation with national and international museum partners and lending institutions and to discuss the risks revealed by the recent attacks.”

The museum’s director Ortrud Westheier has said that “while understanding the urgent concerns of activists in the face of the climate catastrophe, I am appalled by the means they are using to back their demands.”

“Especially in the works of the Impressionists we see the intensive artistic examination of nature,” he added. “The many landscape paintings in the Hasso Plattner Collection can also give visitors the impetus to reflect and question their relationship to the environment.”

The previous week, activists associated with Just Stop Oil had chucked tomato soup on Vincent van Gogh’s Sunflowers at the National Gallery in London. In July, members of Ultima Generazione (Last Generation) glued themselves to the protective glass on Botticelli’s Primavera at the Uffizi Galleries in Florence.

One of the Just Stop Oil protestors elaborated on their action in a recent video shared on TikTok and Twitter.

listen to her explain the Van Gogh soup protest.

she’s got a point, no? pic.twitter.com/cObcWNx8aP

In the video she says, “what we’re doing is getting the conversation going so we can ask the questions that matter. Questions like: Is it ok that Liz Truss is licensing over 100 new fossil fuels licenses? Is it ok that fossil fuels are subsidized 30 times more than renewables when off-shore wind is currently nine times cheaper than fossil fuels? Is it ok that it’s their inaction that has led to the cost of living crisis?”

“This is the conversation we need to be having now, because we don’t have time to waste. Last year, Sir David King said what we do in the next three to four years will determine the future of humanity. We’re using these actions to get media attention because we need to get people talking about this now and we know that civil resistance works.”

In their latest action today, Just Stop Oil protestors smashed chocolate cake onto the wax model of King Charles III at Madame Tussauds in London. According to a post by the group on Twitter, Eilidh McFadden, 20, from Glasgow, and Tom Johnson, 29, a painter/decorator from Sunderland said, “The science is clear. The demand is simple: just stop new oil and gas. It’s a piece of cake.”