Home News Marie Antoinette’s ‘Trianon Guitar,’ Which She Gifted to a Musical Member of... 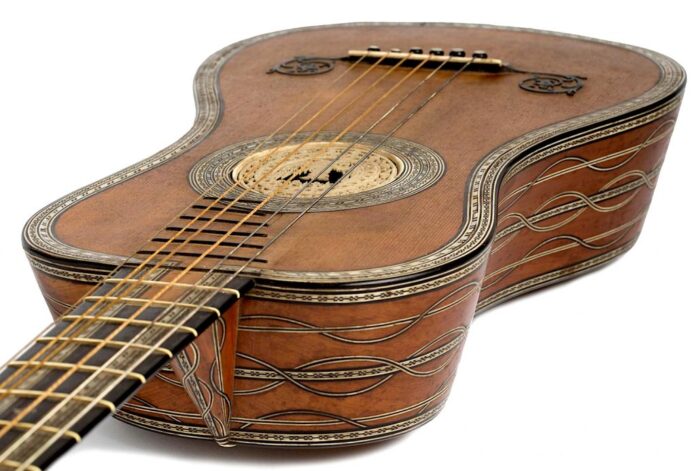 A lover of music who played several instruments and sang, Marie Antoinette regularly held carefree musical and theatrical performances in her bucolic Trianon retreat in France, just outside the Palace of Versailles, while the rest of the country was heaving towards bloody revolution. In this haven from palace pressures, including her Petit Trianon, a chateau given to her by her husband, King Louis XVI, Marie Antoinette also offered instruments to friends and members of her inner circle.

What is believed to be one of them, a rare “,” or boat-shaped guitar, made by Jacques-Philippe Michelot ca. 1775, will go on sale at the Aguttes auction house in Neuilly-sur-Seine on December 9. Kept in “remarkable condition,” the so-called “Trianon guitar”—decorated with ivory rosettes depicting the “Temple of Love” from the Trianon estate—was also “at the forefront” of French craftsmanship at the end of the 18th century, said Aguttes house expert Grégoire de Thoury, speaking to Artnet News.

Thoury researched the instrument’s provenance and relied on family documents, carefully kept over centuries, stating that the queen had given the guitar to her friend, the Marquise de La Rochelambert-Thévalles (1758–1835), who survived the French Revolution by fleeing to Switzerland. No official palace records exist for the personal gift.

About the same age as the queen, the marquise was a member of the queen’s inner entourage, praised for her musical talent and voice. The two women performed together, and the marquise’s parents were regulars in the king’s court. Her godfather was Louis de Bourbon, Dauphin of France.

The marquise’s family preserved the queen’s guitar in the ensuing centuries, and one of her descendants has put it up for auction. With French institutions reportedly interested in acquiring the instrument, according to the French daily , Thoury said its owner “would think it wonderful…if it became available to the whole world to see” in a museum.

Another item for sale in the same auction is a sword believed to have belonged to Marie Antoinette’s first page, Charles Bonnin de la Bonninière de Beaumont (1768–1836). Marie Antoinette was apparently so “intimate” with the young aristocrat, according to the Aguttes description, that she addressed him with the familiar “tu” pronoun, a rare honor at Versailles. Engraved with the fleur-de-lis symbol of the France’s Ancien Régime, the gilded bronze and silver sword is estimated to fetch between €1,500 and €2,000.

Founded in 1974, Aguttes auction house includes salesrooms in Brussels, Lyon, Aix-en-Provence, and Paris. With 15 specialized departments, including Asian and Russian art, Old Masters paintings and drawings, classic cars, and more, it clocked in €77.5 million in sales in 2021, according to .

The story of Maryan, the Polish Holocaust survivor who expressed his trauma through his art, is told in new show